Several candidates vying for public office in Minneapolis lambasted the city’s current leadership and the Democratic Party at a rally last week, criticizing both for not doing enough to address the state’s persistent racial disparities and calling for a “massive, demonstrable paradigm shift in the city.”

The rally, organized at the City Hall rotunda by mayoral candidate Nekima Levy-Pounds and attended by dozens of her supporters, aimed to act as an alternative State of the City address, one focused on Minneapolis’ communities of color. Levy-Pounds said she believed such an address was needed after witnessing what she called nearly four years of dysfunction and a “government not living up to its responsibilities.”

Besides Levy-Pounds, speakers included City Council hopefuls Raeisha Williams, Tiffini Flynn-Forslund and Samantha Pree-Stinson, all of whom chastised the city for the disunity within its leadership, and for inadequately addressing issues that most affect its communities of color: affordable housing, raising the minimum wage, closing the state’s achievement gap and pushing for stronger police reforms.

“The ongoing miscommunication and lack of strong leadership, which was exposed by the report from the Department of Justice recently, has been a hallmark of this current administration,” Levy-Pounds told the crowd, “especially when dealing with issues that impact communities of color.”

The city’s handling of the occupation of the Fourth Precinct after the fatal shooting of Jamar Clark was emblematic of deeper shortcomings within city leadership, said Levy-Pounds. “[The occupation] should have been a signal to the current mayor, police chief and City Council members that our community is fed up with business-as-usual politics,” she said.

Instead, Levy-Pounds said, after the encampment was disbanded, Mayor Hodges and Council Member Blong Yang attempted to allocate more than $600,000 to help fortify the Fourth Precinct police department — a move that received strong pushback from activists, who said more funding for the status quo wasn’t the answer.

But Clark’s death also acted as a catalyst for many people of color getting more involved in city politics. It’s one of the reasons Raeisha Williams decided to run this year for the city’s Ward 5 spot — and why she wants to see the city’s current leadership ousted. “I’m happy to see more candidates of color getting out here, but what I really want to know is your track record,” she said at Thursday’s rally. “Were you out there fighting for us when we were out there fighting, or is it popular to do so now?”

Like Levy-Pounds, the City Council challengers also blasted the DFL Party on Thursday for using people of color as “tokens” to push the party’s favorability among voters, while not doing enough for their communities.

“That’s why Raeisha and I bucked the DFL system, because we are tired of business as usual,” Levy-Pounds said, referring to her decision not to vie for the party’s endorsement. “We are not going to seek the endorsement from a party that does not treat people of color the way they deserve to be treated.” 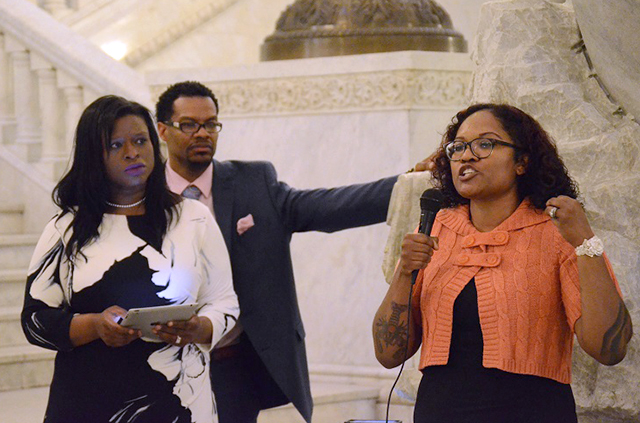 Green Party candidate Samantha Pree-Stinson, who’s vying for the city’s Ward 3 council seat, agreed, saying she’d like to see candidates of color get elected into public office in the city without relying on the DFL to do so.

Most of the people running for mayor and the council are seeking the party endorsement, however. Last month, wards in north Minneapolis and downtown saw strong turnout among those supporting candidates hoping to secure the DFL endorsement over incumbent council members.

Among them is Tiffini Flynn-Forslund, who’s seeking DFL endorsement in Ward 6, where there’s a contentious fight for the seat among herself and two other candidates, incumbent Abdi Warsame and challenger Mohamud Noor. Flynn-Forslund said though she’s seeking the endorsement, she can understand why candidates like Levy-Pounds don’t care to based on her own experience. “Never have I felt so wiped out from my own party,” she said.