Over the weekend, Danielle Tietjen was joined by more than 30 neighborhood volunteers to get their communal garden ready for the summer growing season. “We’re building our trellises, painting everything and putting our plants in the ground,” she said.

Tietjen started Story Garden two years ago in Minneapolis’ Folwell neighborhood after she got tired of seeing community gardens sprout up only to be abandoned and wither. Today, her garden makes up one of the dozens of new urban farms that have cropped up around the Twin Cities over the last decade, part of a quickly growing movement to build growing operations and marketplaces along the West Broadway corridor in north Minneapolis.

For years, several organizations — groups like Appetite for Change, Project Sweetie Pie and the Wilder Foundation’s Mobile Market — have worked to increase access to healthy food on the city’s north side. But more recently there’s been a big push from funders to increase that work as part of an effort to address the area’s food and health problems. In fact, last month, a handful of north Minneapolis organizations received $1.5 million in grants to grow their work around food access in the area, with the idea of eventually creating a self-sustaining food network.

“There’s no singular organization or singular part of the food system that you see on the north side that could create a self-reliant food system by itself,” said Miah Ulysse, the coordinator for the Northside Fresh Coalition, a collective of organizations and individuals working on food access issues in north Minneapolis. “But that’s the whole goal — so we have to come together to do this.”

The idea for the Northside Fresh Coalition came out of a NorthPoint Health and Wellness Center survey in 2009 that pointed to a need for better access to healthy foods in north Minneapolis, Ulysse said. From that survey, dozens of organizations came together to address the issue. “We have a full coalition that meets on a quarterly basis and we ask each other, ‘What can we do better together as one?’” she said.

The notion is to create a food system that doesn’t rely on outside help to survive, said Catherine Fleming of Project Sweetie Pie, a member organization of the coalition that helps operate 25 urban farms around the Twin Cities. Instead, they want to create a system where north Minneapolis residents could grow their own food, sell it for profit, and train others in the community to run and maintain the farms and other food manufacturing processes. 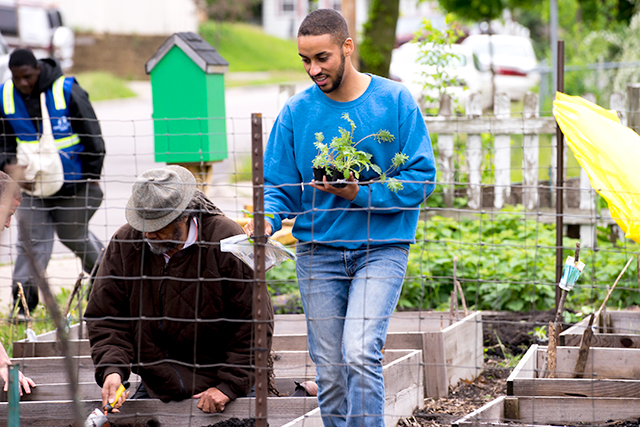 Adair Mosley of Pillsbury United Communities, a longtime Twin Cities charitable organization, said the group recently received $190,000 in private grant funding to open a new, full-service grocery store in north Minneapolis called North Market. With the growing number of urban farms and other food production facilities on the north side, Mosley said, the market is expecting to buy about half a million dollars’ worth of produce from local vendors once they’re up and running later this fall.

DeVon Nolen, who runs the West Broadway Farmers Market, said creating products to export out of north Minneapolis is another necessary part of creating a sustainable system around all these efforts. “The only way to really address the long-term history of divestment and disinvestment here is to be able to compete in the marketplace,” she said, “which means we need to have a product to export.”

Seven years ago, when Project Sweetie Pie founder and Executive Director Michael Chaney solicited funding to build an urban agriculture system in north Minneapolis, “They looked at me like I was crazy,” Chaney said.

No longer. Last month, United Way and the General Mills Foundation announced they were taking a different tack to their charity work around hunger issues and awarded 11 north Minneapolis organizations $1.5 million dollars over two years to help expand their work in food access programs like Project Sweetie Pie’s urban farms and greenhouse project. 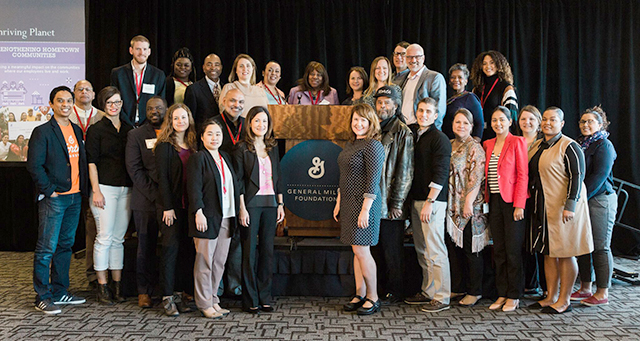 Perceptions around urban agriculture and localized food networks have changed dramatically in Minnesota over the last several years, says State Rep. Karen Clark, DFL-Minneapolis. Just two years ago, Clark introduced a bill that would allocate state money for the first time to urban agriculture endeavors. It failed. This year, however, a similar bill appropriating $250,000 annually over the next two years to urban agriculture projects across the state passed.

Clark said that’s in part because of a growing pressure from community advocates to fund such endeavors, and because urban farms have grown significantly across the metro in recent years.

“It’s just booming,” she said, “whereas a few years ago there were a few urban farms. Now, there are hundreds. It’s becoming clear that this is not a passing fad or phase, this is becoming part of the economy.”