Ruhel Islam knows food insecurity well. Growing up in Bangladesh, Islam didn’t always have access to food, let alone healthy food, an outlook that shaped his very business model. “If we all do our part, the world will be a better place,” he said.

That simple mantra has been the driving force behind Islam’s restaurant, Gandhi Mahal, a popular Indian and Bangladeshi restaurant in Minneapolis’ Longfellow neighborhood. But it’s also why Islam has received attention for his charitable works — like supporting and growing locally sourced food and building a community room in the neighborhood that anyone can use to host events.

It’s also why for the last three years, during Ramadan — a monthlong Muslim holiday celebrated through fasting — Islam hosts free iftar dinners every night and donates the proceeds to charity. “There’s a suggested $15 donation,” Islam said. “They can pay $15 and their money will go to good causes.”

He started the dinners two years ago, Islam said, and has raised about $3,000 each year. The money has gone toward things like creating a public prayer service during Northern Spark; helping to pay college tuition for immigrant students; or raising awareness around climate change. This year, he said, their proceeds from the dinners will go toward installing solar panels in mosques in Sierra Leone, and helping to rebuild health clinics there.

“This is a lifestyle,” Islam said. “We find our peace through this.”

Cottage Grove resident Khadija Zeig found out about Gandhi Mahal’s iftars — the dinners where Muslims break fast — because of the charity this year. She came to help support a good cause in Africa, she said, but she left impressed with the food. “Especially after fasting, it’s the kind of food you want,” Zeig said. 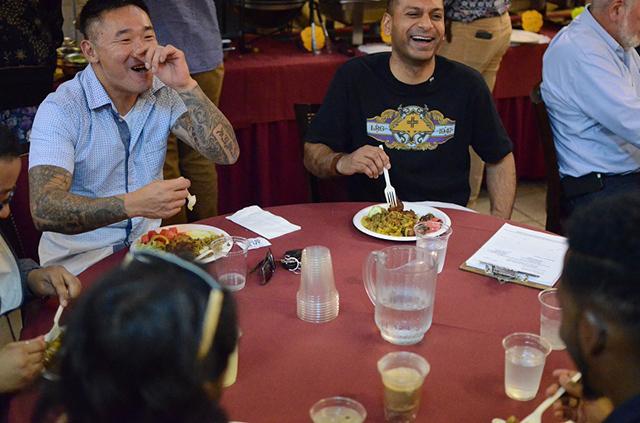 MinnPost photo by Kristoffer Tigue
More than 40 diners attended the iftar at Gandhi Mahal Thursday night. Ruhel Islam said hundreds of people from all faiths attend his iftars each year.

Camilla Jamal, from Minneapolis, agrees, and said she started coming to the iftars after realizing how healthy the food was. “Since I started fasting Ramadan, I’ve been feeling weak because of the choices of food that I’ve been eating,” she said. “But I came here yesterday [to eat], and I actually felt okay.”

That’s what’s great about Gandhi Mahal iftars, said Muhammad Jiwa, who comes all the way from his home in Osseo to attend the dinners. Many restaurants host buffets during Ramadan, he said, but at Gandhi Mahal you get food that’s delicious, healthy and locally sourced and sustainable (the restaurant grows most of its food in local gardens and in aquaponics in the basement). “You can go anywhere [for iftar], but you got to come here. It’s definitely worth it.”

Rep. Keith Ellison also made an appearance at one of the dinners Thursday night to talk about climate change, pay his respects to the restaurant’s owner, and to pray. The community, charity and food all make Gandhi Mahal a unique establishment, Ellison said, and one of his favorite places to go. “It’s more than just a restaurant,” he said. “It’s a social gathering place. It’s a place where people who are facing political struggle come to organize. It’s just a great place.” 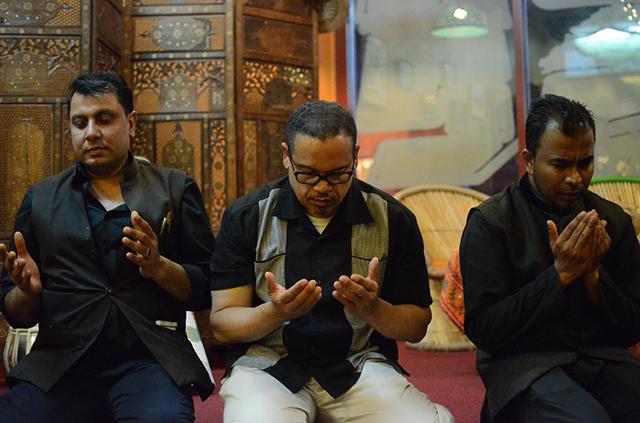 Islam said that’s just the kind of community he’s trying to build, and why he believes people from all faiths attend his iftars each year. “I’m inspired by the saying, ‘Be the change you want to see in the world,’ ” he said. “I am being the change and leading by example.”

Gandhi Mahal will continue its iftars every night at sunset, or roughly 9 p.m., through Saturday, June 24.

In Minneapolis’ Longfellow neighborhood, a restaurateur looks to build a Ramadan tradition