When Adam Hulst learned that his employer, the Linden Hills Co-op, would be merging with The Wedge Community Co-op last October, he quickly voted yes on forming a union.

“There was a sense that we should have a union for a long time,” he said. “I think that the presidential election and the announcement of the merger were two factors that functioned as a catalyst for us to really get our stuff in gear.”

Together, about 450 employees between the three co-ops are now organized under United Food and Commercial Workers Local 653, according to union officials. “As expansions were happening, as consolidations were happening, this sense of being a worker on the floor was shifting … to more of a corporate model,” Hulst said. “We felt like anonymous, interchangeable workers.”

Less about wages and benefits

Unlike typical union contracts, Minneapolis co-op workers say their efforts weren’t primarily about wages. “For most people … it’s less about wages and employee benefits and more so on what the co-op’s going to be doing in the next 40 years,” said Max Storey, a worker at Seward Co-op’s Friendship store.

Traditionally, Storey said, co-ops operated on a model where members and workers have some say in how the business runs. But as Seward expanded over the years into three different locations, he said, many workers began feeling less included in those decisions and began expressing concern over diminishing communication with management. “It no longer felt like the co-op they had been working at and that is what kind of motivated them to change,” he said.

However, Hulst said that wages aren’t entirely off the table — at least at Linden Hills, where workers make less on average than those at other Twin Cities Co-ops. According to union data, about half of Linden Hills employees make between $9 and $13 an hour. And Hulst said they’re hoping to raise those wages even before the Minneapolis $15 minimum wage begins to phase in over the next five years.

Alex Slichter, board president for Linden Hills, declined to comment on contract specifics but said negotiations are going well. “We definitely support our employees,” he said. “They’re critical to our success and we look forward to coming together to make a decision that works for everyone.” 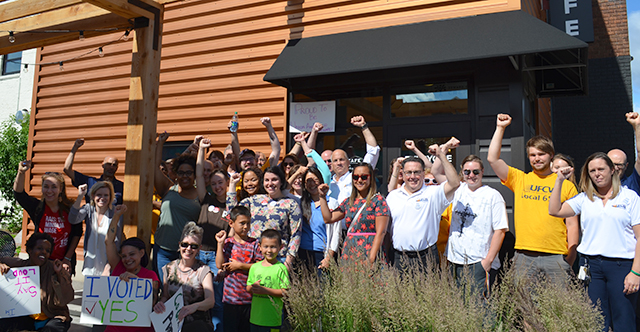 Courtesy of UFCW 653
Seward workers celebrating back in June after 94 percent of their nearly 300 workers voted to join the union.

John Lacaria, the general manager over at Eastside Co-op, echoed similar statements, and said they’ve already held two bargaining sessions with their workers since they began negotiations last month. “Those have been really productive,” he said. “We’re just continuing to work through the process.”

Seward workers have yet to begin negotiations, but Storey said they’re hoping to establish a list of demands by the end of the month, and so far, everyone seems happy. “Everything the co-op stands for, are union values at the end of the day,” he said. “The equity, the accountability, all of that.”

To Christensen, co-op workers see unions as the best way to preserve their workplace values as co-ops continue to grow in popularity.

“We’ve been talking to workers for several years and it seemed like the timing was right,” Christensen said. “The co-op ideal and the union ideal of workers being able to make real contributions to their workplace are really consistent.”

The Wedge, which opened in 1974 and is Minnesota’s first certified organic grocery store, will renegotiate its three-year contract next year.

Why food co-op workers in Minneapolis have flocked to unions