“Puerto Ricans need their coffee!,” exclaimed singer/rapper/writer/activist Maria Isa Pérez to her fellow board members of the Puerto Ricans In Minnesota Committee last Thursday. “We must have coffee at these events, it’s a crucial part of our culture!”

It was a lighthearted moment during the group’s otherwise no-nonsense meeting at the Indigenous Roots Cultural Arts Center, the newly opened “collective of artists and organizations dedicated to building, supporting and cultivating opportunities for indigenous peoples and communities of color through cultural arts and activism” in the Dayton’s Bluff neighborhood of St. Paul.

But Isa and her fellow Puerto Rican-Americans had more important things than coffee to discuss this night — namely, the two appearances by Puerto Rican nationalist and activist Oscar López Rivera Monday and Tuesday in St. Paul.

López Rivera, the 74-year-old political prisoner who spent 35 years in jail until President Obama commuted his sentence during the last month of his presidency, is often referred to as “the Mandela of Puerto Rico.” López Rivera moved from Puerto Rico to the mainland with his family when he was 14 years old under the United States’ “Operation Bootstrap” campaign; he was drafted to fight in the Vietnam War when he was 18, and he was imprisoned on domestic terrorism charges when he was 40. He has maintained his innocence, and spoke out against violent radicalism, ever since.

Coming at a time when Puerto Rico is facing bankruptcy and America is going through an accelerated soul search around race, immigration and white power, Rivera’s “Decolonization, Community & Arts” speaking engagements this week are the highest-profile events yet for the two-year-old Puerto Ricans In Minnesota Committee.

“Our mission has been to bring the diaspora of Puerto Ricans together, to deal with the economic issues and political status issue of our island,” said PRIM’s executive director Miguel Fiol, a physician and professor at the University Of Minnesota. “And since that time, we’ve done a number of activities to advance those two issues’ resolution. We’ve had political meetings with leaders, and cultural events, and the reason why this board was created is to bring our point of view to the Anglo community and be participants, not just observers, of issues that are happening in our country. We want to empower the diaspora to become involved.

“Oscar López Rivera represents one point of view of resolving Puerto Rico’s political crisis, and he also brings points of view of social and economic angles as well to enrich our understanding and our educational process. In the ‘70s, he was involved in clandestine activities for the liberation movement. He was not associated with any particular violent event when lives were taken, contrary to what some of the public believes, however he was part of an organization that was involved with advancing the political independence by means other than the voting system. 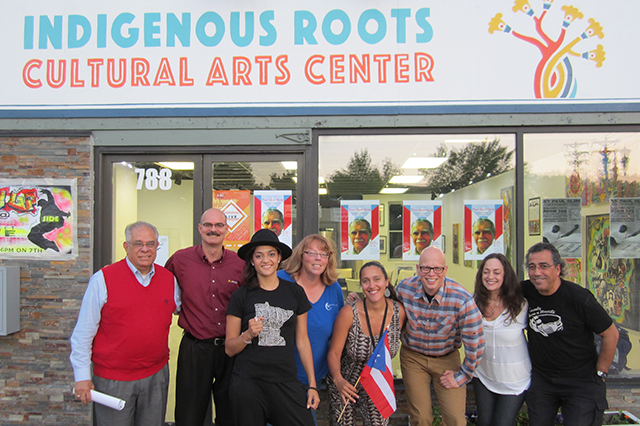 “We are here to reassert our identity. There’s this feeling among Puerto Ricans, both in Puerto Rico and here, that we’ve been robbed of our political power. We relate to the Native Americans, who very similarly were robbed of their identity, and the group is about reasserting our identity and culture.”

According to the most recent Census figures, some 12,000 Puerto Rican-Americans live in Minnesota. Puerto Rico became a U.S. territory in 1898, when U.S. troops invaded and acquired it from Spain after the Spanish-American War. Since 1916, Puerto Ricans have been U.S. citizens, but the relationship between Puerto Rico and the United States remains complicated.

“Herstory or history tells us that many Puerto Ricans did not want U.S. citizenship,” explained Rene Antrop-Gonzalez, PRIM board member and dean and professor of urban education at Metropolitan State University. “It was imposed because it would have been unconstitutional for the U.S. to draft Puerto Rican men to fight World War I. It wasn’t because they like us, or that they felt sorry for us, it’s that their modus operandi was that they needed us to be fodder on the front lines of Europe. That’s just the bottom line, and I think a lot of people don’t know that.

“Oscar is briefly going to talk about how schools strip people of their primary languages and cultures. And that has been part and parcel in being Puerto Rican. I was raised in Florida, which is now a major destination for Puerto Ricans, and I was never, ever encouraged to learn about my own people or history. My mother worked in a deli and she was constantly told by customers, when she tried to engage in Spanish, ‘You’re in America now, spic, speak English

“Oscar co-founded a small Puerto Rican-centric school in Chicago, and he’ll talk a little bit about that. Education is important, because it’s trauma. It’s trauma, and in the same way our indigenous brothers and sisters suffer and experience intergenerational trauma, we do, too.”

In its short time together, PRIM has gathered around food, music, dance, and lectures on politics and economics. This week, at a moment in time when the grandchildren and great-grandchildren of America’s first people and its slaves are demanding its family stories be told and reparations be made, Oscar López Rivera and PRIM are here to remind all concerned exactly how Puerto Rican lives matter.

“It’s healing work, is what’s happening, because we are products of the trauma that our parents [experienced” data-shortcode=”or] go home.’

“Oscar co-founded a small Puerto Rican-centric school in Chicago, and he’ll talk a little bit about that. Education is important, because it’s trauma. It’s trauma, and in the same way our indigenous brothers and sisters suffer and experience intergenerational trauma, we do, too.”

In its short time together, PRIM has gathered around food, music, dance, and lectures on politics and economics. This week, at a moment in time when the grandchildren and great-grandchildren of America’s first people and its slaves are demanding its family stories be told and reparations be made, Oscar López Rivera and PRIM are here to remind all concerned exactly how Puerto Rican lives matter.

“It’s healing work, is what’s happening, because we are products of the trauma that our parents [experienced” data-mce-resize=”false” data-mce-placeholder=”1″>

and we are carrying through a lot of that,” said Aiyana Sol Machado, director of strategic partnership and member artist at Indigenous Roots Cultural Arts Center, which hosts Monday’s López Rivera event. “We are waking up and undoing the rage, and undoing the pain that our ancestors [experienced]. I have cousins who are products of sterilization, and we see that in all our families. We were the first contact, on the island. The erasure that has been happening with the Native Americans in the United States is what happened [to the Puerto Ricans]. We are products of what is now happening in the United States.”

“We are survivors,” said Isa. 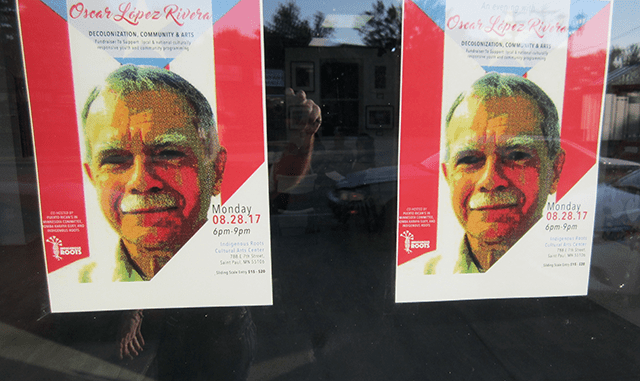 “We are survivors of that,” said Sol Machado, nodding. “In my work, I’m going to be committed to reclaiming our indigenous [roots and identity] as boricuas because that has been left behind,” she said. “Our African roots and our Spanish roots, what makes us boricua is that we are a product of colonization, of the mixture of the indigenous, the African, the Spanish, and we have survived — and we continue to heal through community, and art and song and dance.”

“We’re products of our parents fighting for liberation, and we’re continuing that fight. My daughter now, who is 14 years old, it’s her responsibility now because it’s not going to end in our lifetime. And how do we continue to teach?” said Sol Machado, wiping tears from her face.

Isa: “Being Puerto Rican and born in Minnesota has paved my life. 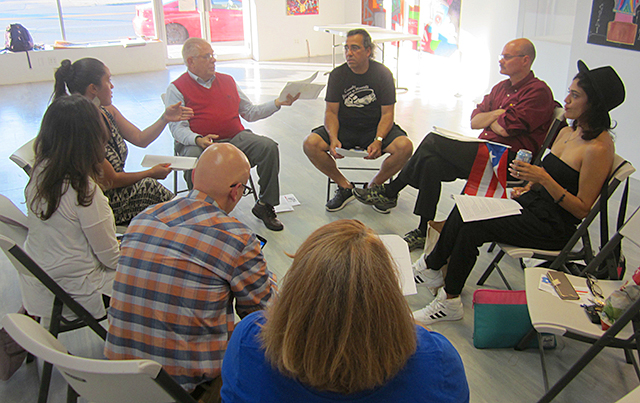 MinnPost photo by Jim Walsh
A recent board meeting of the Puerto Ricans In Minnesota Committee.

It’s paved all of our lives, but my father fought as a [U.S.] Marine, my grandfather was drafted from San Juan at 18 years old and served in World War II, Normandy Beach. The benefits of that isn’t the same. There are inequalities just in military.

“Then we talk about the sterilization, testing on our women, both on our island and off. There’s so much unknown, even within our community, which is why this is a very amazing circle. We come in as these Latino millennials, and we’re not going to allow this to happen. My life was raised so that their history passed on to us, so that we could be able to polish it the way that it’s been trying to be buried.

As Isa showed the group a prototype of her newly finished PRIM promotional postcards, board member Alan Panelli stressed that PRIM isn’t anti-America.

“It’s essential for our culture and our national identity, and by default the political issue comes into play because a lot of us feel like we could be swallowed by the U.S. and we could lose our identity,” said Panelli. “For many of us, that is something that’s non-negotiable, and we’re constantly struggling to celebrate and promote our culture: Who we are, and how we, in our own way, are trying not to get into that melting pot, if you will.

“We are not about hating the U.S. We’re more for Puerto Rico than against the U.S., and this is a fight that we have done for 500 years, and we’ll continue to fight.”