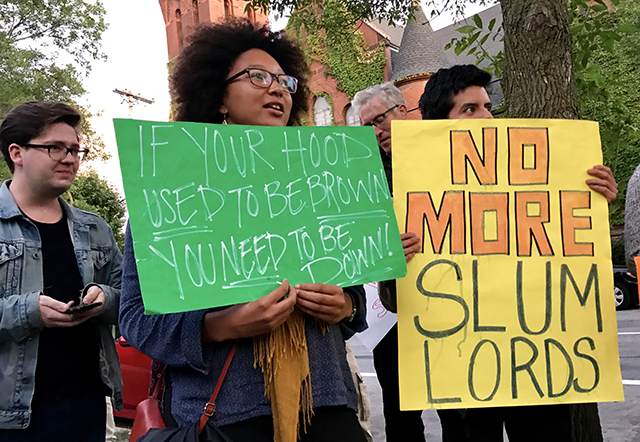 Flora Dominguez lives in a one-bedroom apartment in a nondescript tan brick building on Pleasant Avenue in the Whittier neighborhood of Minneapolis. There’s not much space for her and her husband, Alfonso, their two teenage children, and the newest arrival, an 8-month-old baby girl named Zueleyka.

But while the space is cramped, it’s also filled with the kinds of things — a stroller and a baby walker, a stuffed Bugs Bunny, a picture of grandma on the shelf next to art projects the kids made in school — that convey a sense of home.

It’s a home Dominguez may soon lose. In the 12 years that they’ve lived there, Dominguez and her family have seen their fair share of rent increases. But the latest one, which came after a new company took over the management of the building this April, was a step too far. “When they gave us an increase in rent, it wasn’t more than $40 or $50,” said Dominguez. “This time it’s $75. We came to live here because the rent is cheap. We are poor, we don’t make a lot of money. And what we earn isn’t just for ourselves. It’s for our children.”

The rent increase would bring the monthly payment to more than the family can afford with what Alfonso Dominguez makes as a landscaper, and they haven’t been able to find another place in the neighborhood at a similar rate, at least not one that would allow a family of five. Many apartments in the neighborhood now have leases restricting the number of residents to two or three people per apartment.

Another factor that weighs heavily on Dominguez’s mind is that her 14-year-old son and 16-year-old daughter are now settled in school, with teachers and friends they know. “They have the trust to speak with their teachers, and if they go to a new place they’d have to get to know everything from scratch — the neighbors, the place, the school,” she said.

So instead of moving, Dominguez has resolved to fight. Working with the affordable housing advocacy group Inquilinxs Unidxs por la Justicia (Renters United for Justice), she and a group of nine families in the building are refusing to pay the higher rates. They complain of repairs left undone, including a broken front door lock, which allowed strangers to wander in.

In response, the company that now manages the property, Nexus Real Estate Services, initially agreed to meet with the group to negotiate. But then the company changed tack, serving seven of the families with eviction notices and taking them to court, a process that started last week. (Nexus President Mike Tempel declined to comment for this story.)

There are two well-established and related trends at work behind the loss of affordable housing in Minneapolis: developers building new luxury apartments in mixed-income areas, and developers buying old buildings in those same mixed-income areas and then increasing the rent. The Dominguezes’ situation is due to the latter, as their building was one of several purchased over the last year by a California-based landlord, who in turn hired Nexus to manage the properties.

To address the loss of low and moderate-income housing from these two developments, the city of Minneapolis has two general categories of policies at its disposal. There are those that promote the building of new affordable housing, and those designed to help preserve the existing stock.

In Minnesota, one well-known policy option is off the table: There’s a state law pre-empting the ability of local government to impose rent control. That would be difficult to change or circumvent, but Inquilnxs Unidxs is pushing to start the process, with a “Rally for Rent Control” set to take place Friday at City Hall. 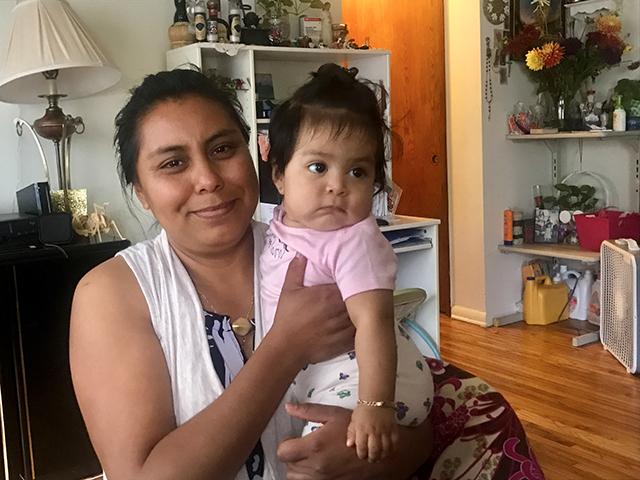 But state law also casts doubt on the city’s ability to use one of the tools many cities employ to increase the number of new affordable housing units: inclusionary zoning. That is, requiring developers of new apartment buildings to include affordable units as part of the projects.

Even so, Minneapolis City Council Member Lisa Bender says that exploring inclusionary zoning as a policy option should be a “no-brainer.”

“We need affordable units, and this is a way for the market to provide that,” said Bender, whose Ward 10 includes Whittier. “I know that there is pushback, but if we do it correctly, I think the market can absorb the cost of the units.”

Bender admits there are “different interpretations” as to how and if the state law would apply to an inclusionary zoning ordinance. “The question for the city would be how much legal risk to assume,” she said. “We could adopt an inclusionary zoning policy and it would likely be challenged in the courts and then the courts would decide how the state law should be interpreted and applied to this policy.”

In a statement emailed to MinnPost, Cecil Smith, board chair of the Minnesota Multi Housing Association, which represents landlords, said that rent increases in Minneapolis have been lower than other comparable cities across the country, and that the MHA is ready to “join with leaders throughout the Twin Cities to urgently develop a thoughtful regional approach” to housing issues.

“In other markets, government and others have partnered to identify more funding for affordable housing,” said the statement. “Unfortunately, in our region, local governments keep suggesting more regulations and burdensome policies that will have significant negative, unintended consequences. None of the proposed policies, like mandatory Section 8 and advance-notice of sale, actually help create affordable housing. Just ask residents of New York, Seattle or Portland whether policies like these are working. Those cities struggle with chronic homelessness and unaffordable rents. The increased regulation adds costs to owners and managers that are passed along to renters.”

There is another tool that has gained popularity in other cities that have tried to stabilize the availability of affordable housing, one that developers would be unlikely to greet with a court challenge: Freezing property tax increases for property owners of affordable housing apartments. Such a move would likely answer the concerns of property owners, who argue that increased city assessments of their property values are part of what’s forcing them to increase rents.

Minneapolis does incentivize developers to include affordable housing units in new projects by providing city financing via the Affordable Housing Trust Fund Program, and Mayor Betsy Hodges recently proposed including another $6.5 million for the fund.

But Bender says that the trust only helps create a few hundred new units each year, which is far below the pace at which the city is losing affordable housing. She sees more promise in ramping up the city’s efforts to help preserve existing affordable housing — often called “Naturally Occurring Affordable Housing” — by helping housing nonprofits purchase apartments.

In theory, at least, an expanded version of those efforts could have helped Flora Dominguez. If the city were to require property owners of affordable apartments to notify the city when the buildings are up for sale, Bender says, that could give nonprofits with access to NOAH funds a better chance of purchasing them.

For now, though, Flora Dominguez is fighting — in court, and on the street. On Sept. 6, Dominguez spoke at a community meeting at the Calvary Lutheran Church on Blaisdell, which was followed by a rally outside’s Nexus’s offices in Uptown Minneapolis. And though she and her family face an uncertain housing future, she has found meaning in her activism, she said. “My plan is that if I don’t achieve our goal, of blocking the rent increases, and if have to leave, I’m going to continue to fight for those who stay.”

Update: This piece was updated to include comments from the Minnesota Multi Housing Association.

Could Minneapolis be doing more to address its affordable housing crisis?