On one of the busiest streets in south Minneapolis, where immigrants from all over the world have opened up everything from restaurants to car dealerships, there’s a small yellow and beige building whose exterior advertises meat, dairy, fruit and fresh vegetables.

The messages would seem to indicate that The Good Grocer is a typical grocery store — and it is, in all ways but one. Its customers are also its workers, people who volunteer in exchange for a discount on their purchases.

Opened in June of 2015 with the goal of providing fresh produce and healthy food options for the low-income communities that surround it, the nonprofit Good Grocer is currently half funded by donors and half funded by grocery sales, an unconventional business model that remains a challenge, says founder Kurt Vickman. “I wouldn’t be doing this if I thought it wasn’t possible to be successful,” he said. “The goal for me is to continue to innovate this model in a way that we could be totally funded by grocery sales.”

That business model isn’t the only issue for the Good Grocer these days, however. Last year, the store learned that its building — located at the corner of East Lake Street and Stevens Avenue — would be demolished as part of the reconstruction of I-35W. And while Hennepin County is expected to help pay for relocation, the two sides are still negotiation to make that happen, says Vickman. “We have a place four blocks away and lots of customers are nervous; we get asked daily what’s going to happen,” he said.

A purpose, and a community

Before devoting himself to the store full-time, Vickman was a founder and lead pastor at The Upper Room, a local activist church — an experience he found not all that different from running the Good Grocer. “The aspect of running a church in some ways is similar to running a business, as it relates to needing income to run the church and it’s a volunteer-led organization,” he said. “So all those things overlapped.”

The idea for Good Grocer came out of Vickman’s experience managing a food shelf, where he saw that people who came there often offered to pay whatever they could for the items. “I was saddened by seeing families who didn’t have enough food and I wanted to do something about it,” Vickman explained. “It was an idea that came from the heart.”

To Vickman, the people who came into the shelter were seen as those in need, and the people working there were the seen as the helpers, a dichotomy he found frustrating. “Just because someone is low-income or has a food insecurity doesn’t mean that they’re giftless or that they can’t be empowered to create a system that helps people,” he said.

That theme — empowering people in the community — is one that Vickman comes back to a lot. He feels that when people are labeled low-income or food insecure, this is how they see themselves, and how society views them as well. 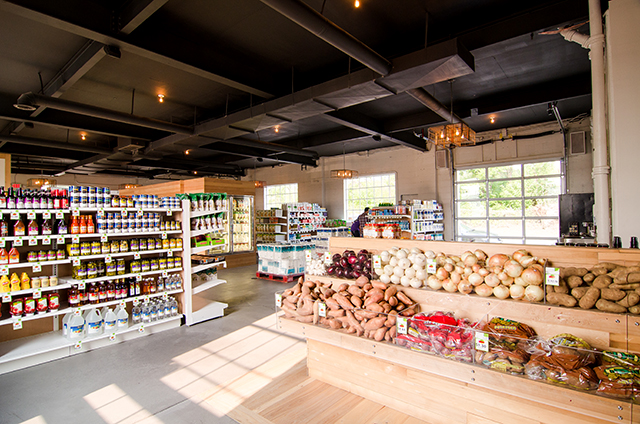 Courtesy of the Good Grocer
The nonprofit Good Grocer is currently half-funded by donors and half funded by grocery sales.

The Good Grocer tries to do the opposite, he says — to give people a sense of purpose and pride. “I remember a guy with a wheelchair came in,” says Vickman. “He asked me what the deal with the store was. I told him it was a volunteer-run store, and that we could really use your help as a volunteer. And he kind of looked at me with this half-stunned face and said ‘Well I’m in a wheelchair.’ I told him that his wheelchair didn’t define him, and asked him what he wanted to do at the store.”

Margaret Humphrey, a volunteer who has worked at the store for a year and a half, says after a battle with depression that resulted in her not being able to work, she found people at the store who understood and received her as she was. “They welcomed and just understand me,” she said. “There’s a sense of community and people know my name,” Humphrey said.

The communal feeling at Good Grocer is also what drove Moira DuCharme to apply for a job as a member services coordinator right out of college, in 2014. She eventually left to travel overseas but didn’t lose her love for the store and its customers. “I came back and wanted to be involved in the store again, so I’m a volunteer now,” she said. “I love the sense of community here and I love seeing the same customers come in that were customers when I was a staff member. It’s been really rewarding and has shown me why I love working the nonprofit sector.”