In September of 2016, The Star Tribune ran an article that highlighted just how isolating and unwelcoming the state of Minnesota can be for people of color, especially those who move here from other places. For many, the “Minnesota nice” mantra is merely a myth, and many of those quoted in the story lamented the lack of spaces and organizations for professionals of color to meet, gather and create a satisfying social life.

That could be one of the reasons members of Blackout Improv — Minnesota’s first and only all-black improv ensemble — have found the experience to be cathartic, allowing them to create something where they have the freedom to talk freely about things affecting their communities.

“I’ve never been a part of something like that in my life,” said Alyssa DiVirgilio, a biracial member of the cast. “I grew up with white peers and pretty much white family members. It kind of keeps revealing itself why it’s important that all the people on stage are black. Even my white family members are still uncomfortable with the show and things we talk about, and that’s why this is necessary.”

The five original founders of Blackout Improv — Kory LaQuess Pullam, John Gebretatose, Alsa Bruno, Joy Dolo, and Andy Hilbrands  — found each other two years ago. All had experience doing improv, but were always the only black members of any group they joined. So when they started putting on the show, which now runs at the Phoenix Theater in Minneapolis, they gave themselves permission to be their authentic selves. “I personally got tired of not having our voices represented and going to shows and seeing one black member on the stage,” said Gebretatose. “I never felt like we had power and access to our own space before doing this.”

Today, Blackout Improv shows include skits and question-and-answer segments where the audience gets to pick the topics from a hat. Nothing is off limits, and they’ve touched on everything from interracial sex and police violence to racism and food. They’ve even done shows in the aftermath of the Philando Castile verdict and Jamar Clark shooting.

“That was my turning point as a comic, like I never thought about what happens when something tragic happens and you still have to be funny,” Gebretatose remembers. “So when the Jamar Clark shooting happened, I was just like we’re going to still do this and just talk straight from the heart. And if it’s not funny, well we deserve to not be funny right now.” 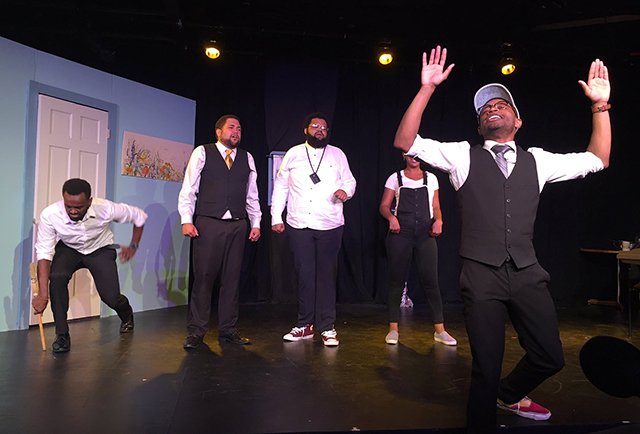 Courtesy of Black Improv
Blackout Improv shows include skits and question-and-answer segments where the audience gets to pick the topics from a hat.

One of the myths that the group likes to dispel is the idea that racism is only a problem in the South —that Minnesota doesn’t really have a problem with it, despite significant disparities of income between black and white households and a longstanding achievement gap between students of color and white students. “We have major problems in this state,” said Kory LaQuess Pullam. “So, let’s just start with the bare minimum, which is to address the facts, and let’s do something about them. With Blackout doing what we do, there’s that opportunity to serve as a mouthpiece and hold a mirror up to ourselves.”

While the group addresses issues that are important to communities of color, they also don’t tailor their shows to one specific audience. All are welcome. For any given show, the audience is made up of white, black, and other nonblack people of color. The cast says they’ve never felt the need to not talk about something because of who is (or isn’t) in the audience. “It’s important for us to be our truest selves and to represent the black community in a positive way,” said Pullam. “But at the same time, we just do what we do and let the cards fall where they may because we trust our sensibilities as human beings.”

Most important, in a country that is rife with division, the cast says they feel that their shows give people a sense of relief for an hour-and-a-half.

“I honestly didn’t know it was a social responsibility until it kind of just became one out of nowhere,” said Pullam. “Then I realized just how rare it is to not only see something like this but also see it find success without sacrificing dignity and intention. I’m happy to hold this torch, and I’ve got an awesome team to help me bear it.”