What’s it like to run as a black candidate in the Twin Cities, a metro area home to some of the worst racial disparities in the country?

That was the question at a wide-ranging panel discussion sponsored by the Green Party and held in North Minneapolis earlier this week called “Running Black” — a topic made all the more timely by a dispute between members of the St. Paul Police Federation and St. Paul mayoral candidate Melvin Carter III.

Carter accused the federation of a “racist attack,” after they wrote an open letter questioning why he had failed to provide police with the serial numbers of two handguns stolen from his home over the summer. Carter said he didn’t know the serial numbers, was the victim in the case and had fully cooperated with police. In a statement, the federation said that the “intent our letter yesterday was in no way to revictimize the Carter family and for that we apologize,” but also accused the Carter campaign of calling all the “amazing men and women of the St. Paul police department” racists.

Samantha Pree-Stinson, a Green Party candidate for Minneapolis City Council Ward 3, organized the forum, and said the comments from the St. Paul police union were indicative of the double standard black candidates often have to confront. “There are a separate set of rules and standards for us. No degree, no amount of money, no experience can buy respect and human dignity for us in this country,” she said. “It is not just voters who are disenfranchised. It’s also candidates.”

In discussing their campaigns, the speakers described an experience that was challenging, complex and at times exhausting in ways they began to understand only after they made the decision to run. “Entering this race, I’m constantly reminded of how people view African Americans and in particular, how they view women of color,” Levy-Pounds said. ”It’s such a mismatch, the things that people say to me, I don’t even think that they are conscious, a lot of the times, that they are undermining my intelligence, my leadership, by placing a double and triple standard on me that’s not being placed on my white counterparts.”

Pree-Stinson, an Army veteran, said that one of the main reasons she wanted to organize the event was that, while Minneapolis has had black mayor — Sharon Sayles Belton — there has never been so many black candidates running at the same time.

“We’re having an historic election in Minneapolis where we have a record number of people running for office, and there are a lot of differences between how you gather your support, even how you form your campaign teams, when you’re in the Midwest and the majority of people that you’re relying on to get you elected don’t look like you and don’t share your experiences,” she said.

Pree-Stinson, who is running against two DFLers, Tim Bildsoe and Steve Fletcher, as well as a Socialist Alternative candidate, Ginger Jentzen, illustrated her point by telling a story about volunteers encountering racist commentary while door-knocking. “It’s even creating a safe and healing space for your volunteers because even white volunteers will often come back and feel defeated, angry, upset they’re not sure how to respond,” she said. “So there is a whole other level to even dealing with volunteers on your team because they may end up being discouraged.”

Another common refrain among the speakers was what they saw as unfair treatment by the media. Pree-Stinson told a story about being giving what she saw as short shrift in a rundown of the Minneapolis races in a post by Urbanist, a Seattle-based blog. “It’s exhausting to basically have to go into the comments and make a case for yourself without sounding like the angry black woman, without sounding like you’re not respectful of the other candidates,” she said.

Another issue several of the speakers grappled with was how they are often asked if they would represent all of their constituents, and not just black people, in a way that white candidates are not. Pree-Stinson said that, as she sees it, many of the issues facing Minneapolis, like policing, education or equity, most directly affect black people, and that by addressing them she is just trying to prioritize the city’s most urgent problems. 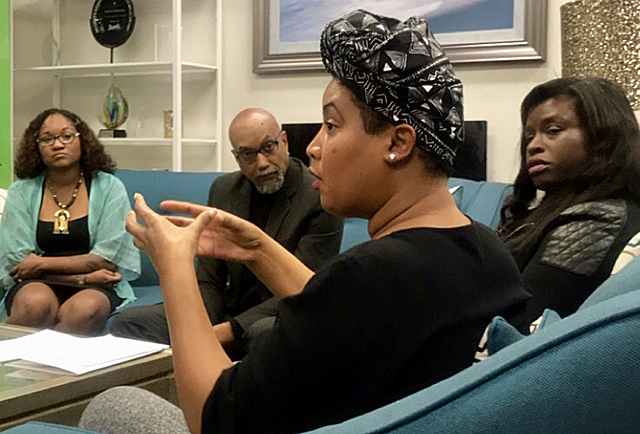 For Williams, the dilemma is a different one. She’s facing of incumbent Blong Yang, the first Hmong-American elected to the council, and two other black candidates, Cathy Spann and Jeremiah Ellison. “A lot of times the concern is that you’re going to split the vote, and I find that to be really insulting because we don’t say that to three white candidates in a predominately white ward,” she said.

All the speakers made clear that in their eyes, not all black candidates necessarily deserve support from the black community. Baraka referred to his experience in the black liberation movement in the 1970s as a way to put the question in historical perspective. He said that many candidates had used the movement’s ideas around issues like community control over education or police, but then reneged on their promises once elected. “We have a context there, of what not to do, so when we talk about running black today, we have to talk about running black in a new way— we have to be informed and guided by principles,” he said.

“Principles that in my opinion, have a bottom line, and this is that if we are going to address the plight of poor people, of working people, the plight of black folks, we have to recognize that if we’re serious about these conditions, that the only way we’re going to transform those conditions is being committed to radical, fundamental change in this country.”