Hennepin County’s action follows the Minneapolis Park and Recreation Board‘s approval of the name change last May. It now awaits approval by the Minnesota Department of Natural Resources and the U.S. Board on Geographic Names.

Wednesday afternoon and evening, a stiff breeze churned waves on Minneapolis’s biggest lake, which was originally named Bde Maka Ska by the Dakota people who lived along the shore, and changed in 1839 to honor John C. Calhoun, one of America’s most aggressive segregationists and proponents of slavery.

As the sun went down over that glorious body of water, MinnPost collared a few walkers, runners, and lake regulars to get their views on the new name, racism, reparations, and living history: 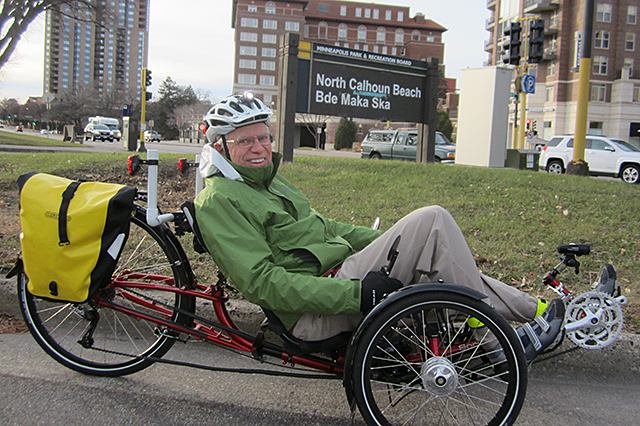 Dwight Johnson, Edina. “I’m a lifelong citizen of the area, so I’ve been coming to the lake since I was a child. I’m really in favor of the [name change] concept. As I was coming by the sign on the southeast side, the only thing I wish is that they would put a phonetic spelling under the name, because I recognize the name but I wouldn’t dare pronounce it to somebody who spoke the perfect language. But I’m a firm believer in not glorifying the history of some of the people we have things named after.” 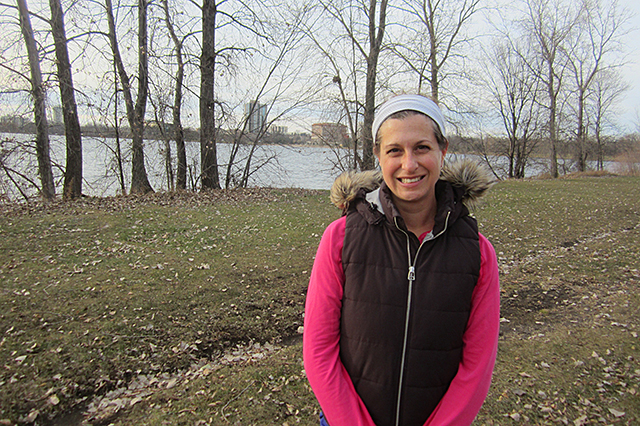 Sara Schonwald, Minneapolis. “I’m happy with ‘Bde Maka Ska.’ I mean, names matter. Names matter a lot, and we don’t want to honor somebody whose legacy is what Calhoun’s legacy is. This is Lakota land and let’s have Bde Maka Ska be the name. I grew up near Lake of the Isles, and I’ve been coming to this lake since I was little and I’m raising my kids just a few blocks away from here, and they call it ‘Bde Maka Ska’ too. That’s how we do.” 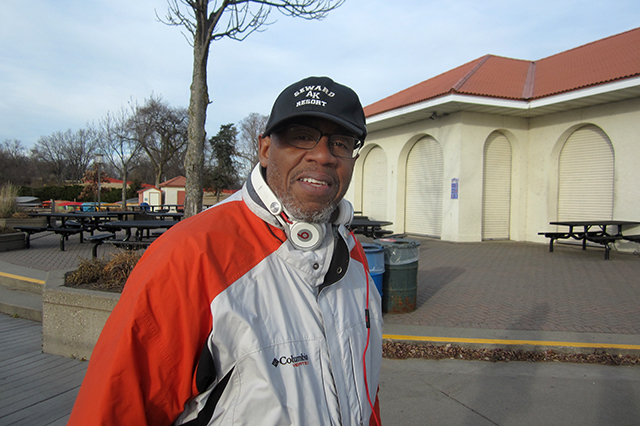 Braxton Haulcy, Minneapolis. “There’s a new name for it? That’s news to me,” said Haulcy, who listens to jazz on his daily walk around Lake of the Isles, Lake Harriet, or Bde Maka Ska. Told that the name of Lake Calhoun is being changed in part because John Calhoun was a slaveholder, he said, “OK, you can change it now. I’m good with that. I didn’t realize that; now that I realize it, I’m fine with the change. I think it’s great.” 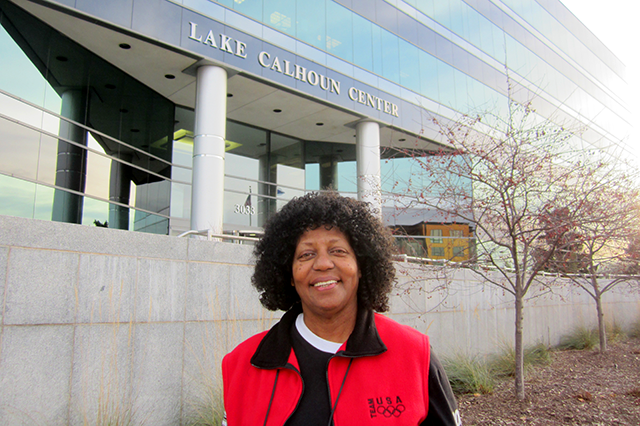 Willie Arradondo Powell, Minneapolis. “I love it. Because I have Native American people in my family, too, and I think it’s right and he was wrong. He was wrong. This whole thing that they did, naming it after this racist slave owner, was wrong.” 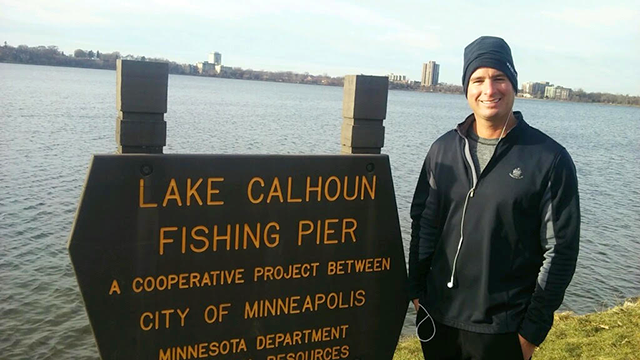 Benjamin Barnes, Minneapolis. “It’s always going to be ‘Calhoun’ for me. I’ve been running the lakes … I’m here 250 days a year. Minneapolis guy. I think it’s absurd that somebody’s got a problem with it not being ‘Lake Calhoun’ for no real valid reason. I don’t get how it could be offensive to anybody, and to have it changed … it’s a piece of history in Minneapolis. To be honest with you, I don’t know what they’re crying about. I’m not a very knowledgeable person about the politics of it, but it’s always going to be Lake Calhoun.” 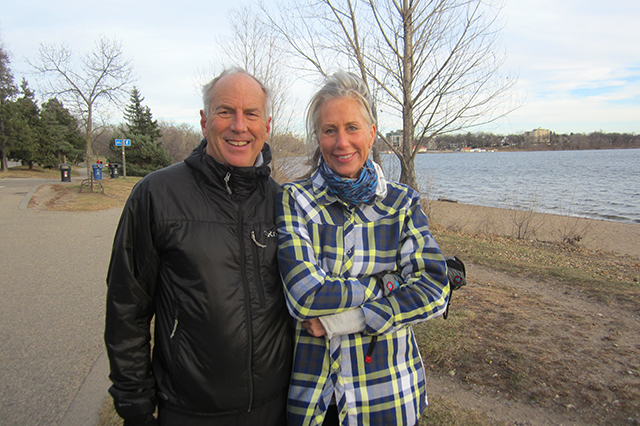 Peter Welles and Pepper Tharp, Minneapolis. “I grew up in Minneapolis, west of the Cities, I live in Linden Hills, my grandfather was general manager of the Calhoun Beach Club, so there’s history,” said Tharp. “I feel like we cannot atone our cultural sins by name changes and I feel that the money that’s being spent on all this would be better served actually giving to the Native communities and putting some kids through college and actually helping the communities. When we start taking down monuments of people who were born into an era … We were born here, we didn’t create it, we’re the stewards of what we do now, and you know, I just think of all the poor kids who died in the Civil War on the South side, who were sons and brothers and they didn’t have a choice … I think to demonize cultures that were caught up in an era and couldn’t make choices because they were probably poor and they had … you know what I’m saying? On top of it, we’ll have to lose the Statue of Liberty because she could be offensive.”

“I agree with everything she said,” said Welles. “My house is right there, you can see it between the trees [on the lake shore]. I think that changing the name here is the tip of the iceberg. I mean, what’s going to be next? Washington Avenue? He was a slave owner. If you think about the names within a three-mile radius of where we are now, I just think it sets a bad precedent. And it’s not out of disrespect to the Dakota people at all, I just think we’re going down a very slippery slope.” 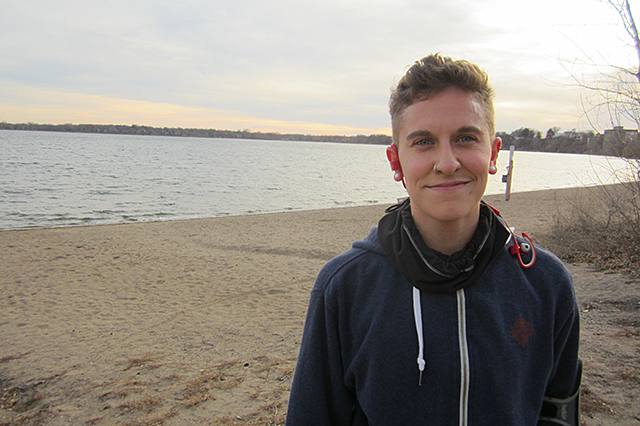 Emily Plombon, Minneapolis. “I run around Calhoun or Harriet or Isles four times a week. I think it’s great that we’re restoring the name. I minored in human relations at St. Cloud State, so I learned about a lot of the bullshit that Native Americans have to go through. Literally, white Europeans took them and we labeled them as animals and took away their culture, cut their hair off, put them in boarding schools, gave them stereotypical European names, and we still use the — this is the wrong word, ‘Indian,’ — but Indian mascot names for teams like Blackhawks and Redskins. I think [the name change] is fantastic. I think it’s fair and it makes the most sense. It’s one thing we can do to try and like form back a relationship that’s not based on oppression.” 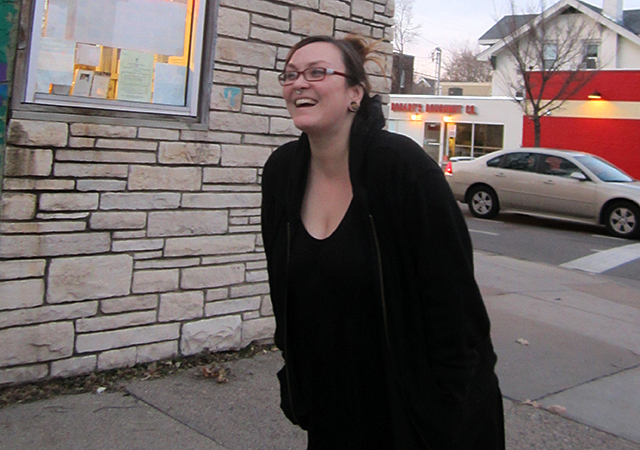 April Pascarella, Minneapolis. “I’ve worked at Calhoun Pet Supply for a while, but I haven’t heard any talk about [the name change] here in the store. I think the name change is amazing. … I think it would be a good idea to change the name of the store, but it’s been named this for so long it might be hard.” 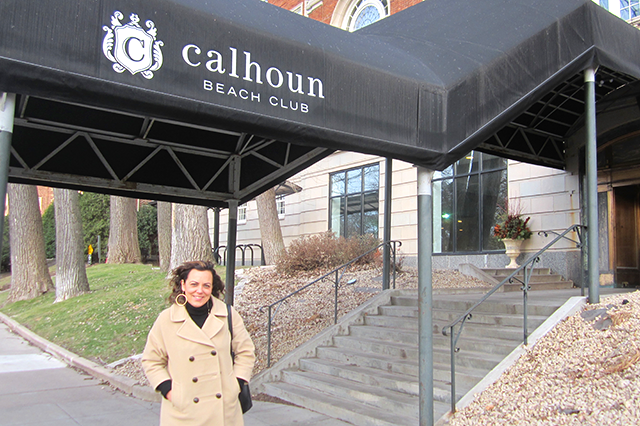 Missy Stricherz, Minneapolis. “I go to the gym here, I’m here to pay my bill. I have lived near the lake since I moved here in 2000. I understand why [the name change] is important to some people, but I have talked to my kids about it, and what I say is that the name doesn’t necessarily have the same reflection of those people’s views. To be honest, I don’t know the story of [John Calhoun], but it doesn’t change how I reflect on the lake, based on past people’s judgments. We talk about what is fair and what is just, and just because that’s the name of the lake doesn’t mean that that should carry on just based on his name. But I understand also the sensitivity behind it, and the importance of representing blacks, whites, all races. I’m not against it, but I think it’s important for us to not just hold on to a name for how we treat people, or be reflected on.” 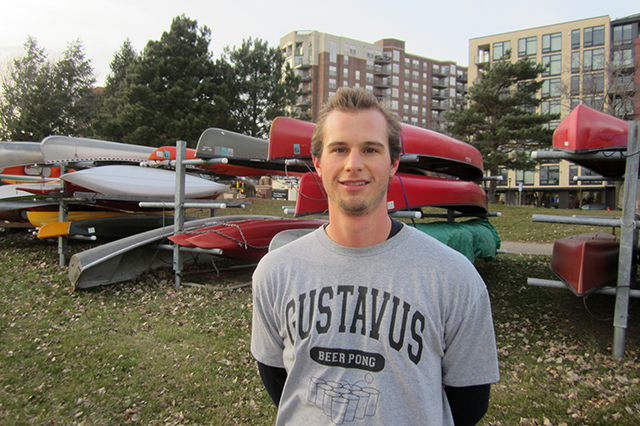 Kyle Hilding, Minneapolis. “I’m a graduate student at the University of St. Thomas, studying to be a teacher. I’m actually really interested in Native Americans and indigenous tribes and human rights and their tribal issues. I generally agree with the name change. I think it will take a while for the community get used to the change, and people need to learn how to pronounce it and also its significance and the meaning to the Ojibwe people. I’m also very interested in environmental issues, and the name of the lake should not only be changed, but the environment in and around the lake should be restored to what it was with the Ojibwe people.” 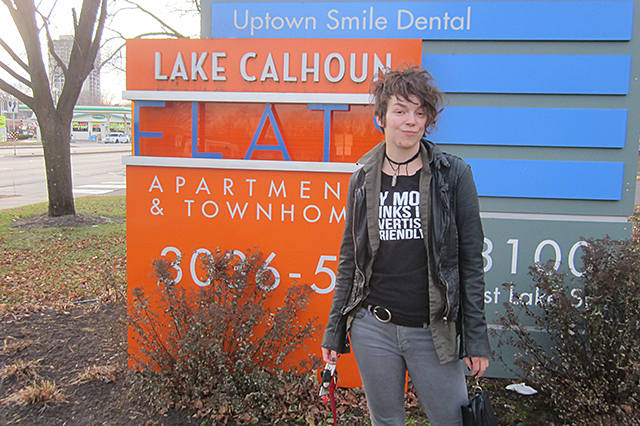 Rheanna Haaland, Minneapolis. “I love the lake. Spent birthdays and holidays here and we used to go swimming in the middle of the night. I’m for the change, it’s just hard to spell. I think that we are, as a nation, moving away from the previous glorification of slaveholders and the cultural divide that happened with Confederate monuments. Yeah, this is important.” 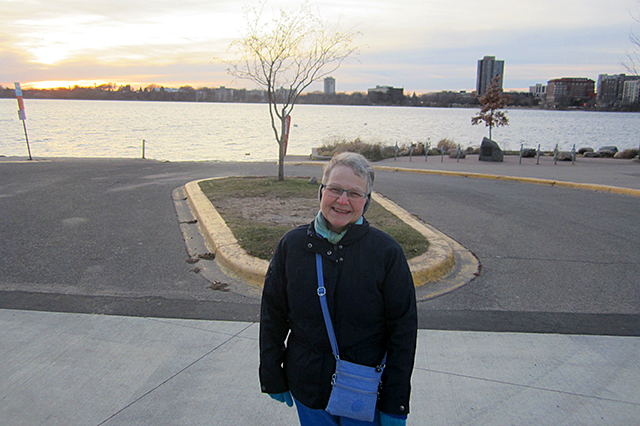 Marlys Nygren, Minneapolis. “I don’t mind. It’s been Lake Calhoun since I was a child, but I realize there’s a lot of things stirring in the culture about old issues, so I don’t feel strongly about it one way or another. But I knew a lot of Native Americans when I was growing up in St. Louis Park, and a lot of them lived on reservations and I don’t feel good about what happened to them historically, so maybe this is honoring them late in time.” 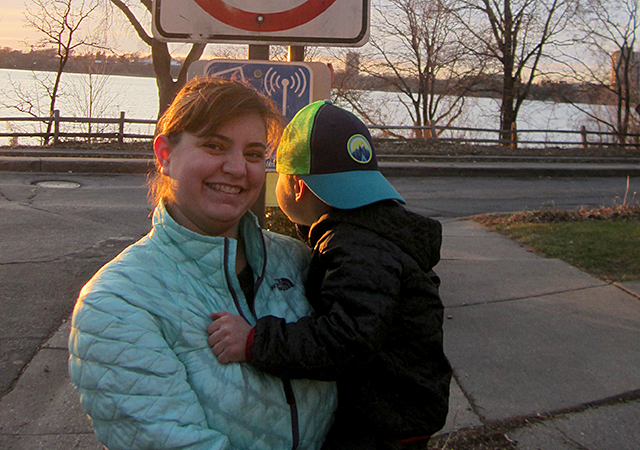 Lauren Sekelsky, Minneapolis. “This is Bennett, I’m his nanny. I like the name change. I think it’s great that they’re honoring the past and that there’s this Native history here. People might be resistant to change, but I don’t really see a problem with changing the name.” 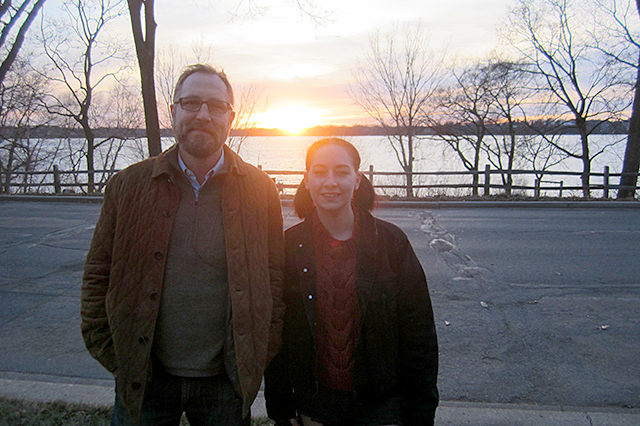 Tim and Emma Prinsen, Minneapolis. “We’ve lived in this house (on the lake shore) just since June, but we lived on 31st and James (near the lake) for 16 years before that,” said Tim. “I’m not a fan of the name they chose. I’m a fan of changing the name, but I’d rather have the name be ‘Lake Maka Ska’ instead of the ‘Bde,’ which means ‘lake’ as I understand it, but it’s hard to pronounce, and names matter. So I think a compromise between some people who are so adamant about keeping the name Calhoun because they don’t like the name that was chosen would probably be a fair compromise. ‘Lake Maka Ska’ rolls off the tongue easier.”

“I think it’s about time they change the name, because of the history of Calhoun, and it’s important to recognize that the lake did have a name prior to Lake Calhoun,” Emma said. “I know some of the new signs with the new name were vandalized, and that is just really unjust.” 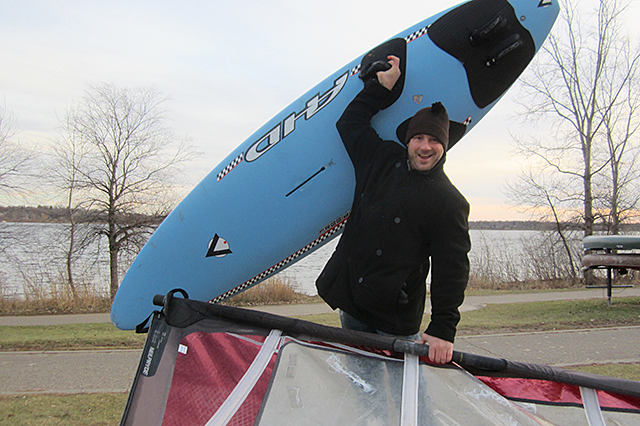 Mike Chummers, Minneapolis. “I windsurf here all year ’round, even on the ice. I’m fine with the name change. I know a lot of people are upset about it, but I’m not. John Calhoun had some reprehensible views and I don’t think he should be honored. But no matter what, it’s gonna be the same old awesome lake to me; I’m gonna have just as much fun on it as I always do.”

‘Names matter’: Finding out just how much on a stroll around Lake Calhoun/Bde Maka Ska