In the 1970s, Mike Roche and his wife, Diane, bought a do-it-yourself beehive kit. They planned to raise bees on their small Virginia farm, but then life got in the way. Mike was a Vietnam veteran and still active in the U.S. Marine Corps, and the couple moved around a lot. Each time they packed up for a new tour of duty, they brought their unused beehive kit with them.

Ten years passed. Mike got a job working for the U.S. Joint Chiefs of Staff, and the couple resettled in Virginia where they revived their dream of raising honey bees. So one day, thousands of bees arrived by mail at the U.S. post office. “Mike had to go to Africa for three weeks.The bees came, and yours truly got to put the bees and the queen into the hive,” remembers Diane, 70, with a laugh.

Before long, their hive was thriving. They got into the rhythm of harvesting honey in their kitchen each fall, bottling the sticky amber liquid into half-pint Mason jars.

But within a few years, their hive died off and beekeeping slipped out of their lives. But when the couple retired and moved Watertown, Minnesota in 2011, Mike Roche resumed his beekeeping, a passion that sustained him until he died this past May.

“All bees work for the welfare of the hive, and that mattered a great deal to my husband. Particularly after his experience in Vietnam,” says Diane.

Mike Roche served in the U.S. Marine Corps for 20 years and retired as a Lieutenant Colonel, but he didn’t use beekeeping as therapy, says Diane. “It was something that was enjoyable, and peaceful and dealing with the bees that he just loved.”

It was something he wanted other military veterans to experience, too.

‘You put this together, and I’ll write you a blank check’

On a blustery mid-November day, a group of beekeepers wearing white jackets and black netted hoods huddle around a squat, vertical beehive. It’s 37 degrees outside, but the sharp wind makes it feel much colder. These are not ideal conditions for a honey bee.

“Hi, there honey! It’s a little cold for you to be flying,” says entomologist Dr. Rebecca Masterman to a lone bee perched on her hand. “They shouldn’t be flying around right now,” she says. “It’s very unusual to see them land on you.This is what happens in the spring and summer. Isn’t she pretty, though?” Moments later, the bee flies away.

Masterman, 47, is program director of the Bee Squad, an outreach arm of the University of Minnesota’s Bee Lab, which conducts scientific research on bees. Masterman and her Bee Squad colleagues teach the public about beekeeping, native bees, and overall bee health.

In 2013, Masterman crossed paths with Mike and Diane Roche through the Bee Squad’s Hive to Bottle program, which helps beekeepers with managing colonies on their own property.

Meeting Mike Roche was transformative for Masterman. “I would get to his farm and we’d have these lovely conversations about how the bees and seeing them healthy gave him so much joy,” she says.

One day, Masterman floated the idea of creating a beekeeping program specifically for military veterans. She says she didn’t come up with the idea, but by the time she met Roche, it was on her to-do list. Mike Roche was immediately sold. “He just said Becky, you put this together, and I’ll write you a blank check,” says Diane Roche.

And that’s how the Bee Veterans program first got started.

‘I feel pretty privileged to be able to come here’

When Mike Roche pledged the initial funding for the Bee Veterans program, Masterman thought she’d overcome her biggest hurdle. But finding the land for the apiary took time.

“It was a slam dunk to me,” says Masterman. “You’ve got somebody who’s willing to fund it, we’ve got a program we know works as far as mentoring new beekeepers, but it wasn’t until the Minneapolis St. Paul Airport and the Metropolitan Airports Commission gave us this home that we were able to really put Bee Veterans in a place where we could really grow the program.”

The Bee Veterans Apiary was christened in the fall of 2015. Since then, 20 veterans have participated in free hands-on programming. Initially, Masterman and her colleagues conceived of the apiary as a veterans-only space. But they quickly learned that inviting veterans to bring a spouse, close friend, or a significant other only made the program stronger. 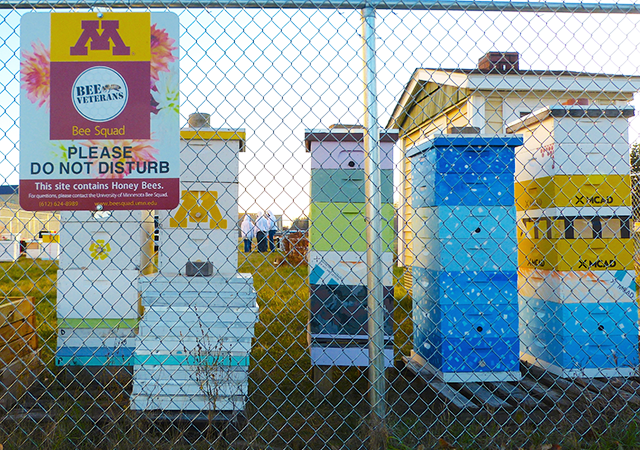 On the day I visited, 53-year-old Air Force veteran Colin Moening worked side by side with his childhood friend Pete Schwen. They grew up in Apple Valley and have known each other since kindergarten. Moening retired from the U.S. Air Force a couple of years ago after serving for “25 years, two months, and two days,” he says with military precision. Moening always wanted to try his hand at beekeeping, but his transient Air Force lifestyle was always a barrier. This past summer, Moening and Schwen spent many evenings at the Bee Veterans apiary. Today, they are learning about winterizing the bees.

Wearing blue rubber gloves, Moening props open a wooden bee tray as Schwen dribbles a liquid concoction over a cluster of honey bees. They’re treating the bees for varroa mites, which are one of the biggest threats to bee health in Minnesota.

“I feel pretty privileged to be able to come here,” says Moening. “We’ve had times where we’ve been one on one with an entomologist.” Moening plans to start two bee colonies at his cabin north of St. Cloud next year, and he’s already preparing with planting flowers and tending to an apple orchard there. For now, he and Schwen are focused on learning as much as they can.

“I’m glad we didn’t just get bees immediately because it would have been a disaster,” he says. Moening says he feels honored that people like Mike and Diane Roche thought to create a program specifically for veterans like him. “You come back to the community after being in the military and you don’t necessarily know a lot of people and where to go. It’s a great opportunity.”

In one corner of the Bee Veteran apiary sits a singular beehive that stands out from all the others. While the rest of the hives are stacked in narrow vertical towers like mini-skyscrapers, this hive is wide, long, and horizontal. It also has a U.S. Marine Corps insignia affixed to one side.

Christian Dahm, 29, is a U.S. Marine veteran and Bee Squad employee who built this hive as an experiment. Honeybees have evolved to zip around vertical tree cavities, but Dahm wants to see if this horizontal hive could make for a happy honeybee home. Dahm and Masterman are trying to find ways to make beekeeping more accessible to veterans in wheelchairs and others with mobility challenges, and this hive prototype is a first step.

Right now, they’re testing to see if the bees in Dahm’s hive will make it through the winter. If they do, Dahm will continue to refine and test his design.

Dahm has been part of the Bee Squad family ever since Masterman awarded him a veterans scholarship to take an introductory beekeeping class a few years ago. He now tends 20 of his own personal bee colonies. He also teaches beekeeping to inmates at Willow River/Moose Lake Correctional Facility.

Dahm’s ultimate goal is to breed a northern hardy bee that can thrive in a frigid eco-region like Minnesota. Beyond this, if his experimental hive works, he’d like to market it to people with disabilities and possibly name it the M.R. Top Bar, in honor of Mike Roche. He wants to ask Diane Roche for permission first, and asks Masterman what she thinks of the idea.

‘He will always live through this program’

The sun has set and most of the Bee Veterans and Bee Squad members have all left the apiary for the day. Masterman warms up in her truck, which is littered with wax combs and other beekeeping detritus. With all the clutter, she jokes that she would have made for a terrible military service member.

Masterman says she’s learned to let the veterans show her what the Bee Veterans program should look like. Early on, veterans told her that they wanted the apiary to be a space where they could focus on the bees and not dwell on their military experiences.

But sometimes caring for the bees can bring up difficult emotions. “I’ve had a wonderful beekeeper veteran, for whom a trigger is seeing the bees if they’re not alive. That’s actually traumatic. And so we’ve had to build this program so that we’re very cognizant of the fact that we want to make the experience as joyful and productive and relaxing and invigorating as possible,” Masterman says.

Long-term, she’d like to see the veterans take over management of the apiary and also involve them in some of the Bee Squad’s research activities, including data collection. Masterman is talking with the Minneapolis St. Paul International Airport about selling Bee Veterans honey there.

Beyond these practical goals, Masterman also wants to install a bench at the Bee Veterans apiary with Mike Roche’s name on it so that his memory can reside among the bees he loved so much. “It is such an honor to be able to know that he will always live through this program,” says Masterman.

The U of M program that helps military veterans — through beekeeping