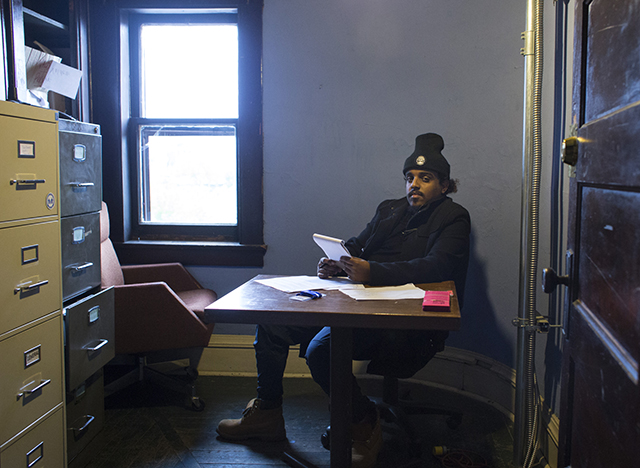 A group of two dozen young men, many of Somali and East African descent, sit in a makeshift circle of chairs on the first floor of a community theater in the Cedar-Riverside neighborhood. Some are in school, some have dropped out, but all have come to listen, tell and talk about stories — about being harassed by police, about basketball, about feeling abandoned by politicians both local and national.

They’re all fans of 20-year-old hip-hop artist and poet Abduzarak Omar, known as “Sisco,” who organized the group and arranged the space in an effort to raise “political consciousness” among his community’s youth.

Omar, with his baggy beanie cap and ponytail, is soft-spoken, yet he commands the room with a sense of poise beyond his years.

“Culturally, back home, it’s like an elder sitting down in a circle with his kids or the neighborhood kids and he tells them the story of their land and the good and bad things that have happened,” said Omar, who moved to America at the age of 8 from Ethiopia. “And it’s kind of a similar thing what we do: We sit around and pick out stories either in the news or things that have happened that are on our minds.”

“Back home” for Omar, whose father is Ethiopian and Somali, is the East African countryside, where traditional storytelling takes a different form. After a day of tilling the land or herding animals, families would gather at night around a bonfire.

Said Salah Ahmed, a Somali poet and playwright who’s also a lecturer at the University of Minnesota, said that the traditional form of storytelling and passing on of folklore and proverbs involved a circle that encompassed multiple generations. It was a way that people learned about their identities, and the stories spanned every aspect of human life, with moral lessons easily transferable to political, social and economic issues. But that tradition and style of storytelling has been lost in large part with migration to the United States and the vast changes in lifestyle that ensued — due to urbanization, the Minneapolis winters and assimilation into American culture.

“In the diaspora, very few people will do the continuation of the telling of stories,” Salah said. “There are no animals to milk and there is gathering in the living room if there is time remaining from homework, but many younger parents that I see on the street will say, ‘How can I tell stories I do not know myself?’ ”

The reality of adjusting to a new country and finding ways to make a living and raise families is a great barrier to the preservation of history and traditions, said Fatuma Mohamed, a student at the University of Minnesota. “My father, as a first immigrant to America, is not going to be thinking, ‘Oh how do I preserve my history?’” she said. “He’s thinking, ‘How do I save the livelihood of my family?’; he’s thinking about securing a good job and making sure we can secure good jobs.”

Omar said he only knows about the traditional form of storytelling from what his older family members have told him. But he sees storytelling as a vital part of his community — and his life. “I feel unhealthy if I don’t let certain things out, and the way I do that is through my art,” said Omar, who spends his days working in the food pantry at the Brian Coyle Community Center and at the Mixed Blood Theatre.

Raised by his grandmother and aunt until he moved out on his own at 16, Omar lost a close cousin, whom he refers to as a brother, to a fatal brain aneurysm, and he lost a close friend to a fatal shooting in 2015. He picked up the name “Sisco,” a reference to an Italian tiger, a few years ago, when he was leading a youth group meeting. He said a few older men walked into the room and said something along the lines of “he is the youngest in the room but has his chest out so far he’s like a tiger in the room.”

His raps and poems touch on a wide range of topics — from love stories to deep struggles and empowering, inspirational songs. One song, “Listen to the Sky,” touches on the death of his close friend Fahmi in 2015 and includes reflections on his life and future.

I ain’t holding nothing, take the better route

I probably blow it down I ain’t about to lie

“My music is about my everyday life; it’s about the lives of the people I’m around,” Omar said. “People sometimes say that I’m too young to have gone through so many things, but it’s also because I’m trying to put myself in other people’s shoes and tell their stories.”

Salah said that hip-hop has yet to be accepted by the elders in the community, but he does recognize its unifying value among youth.

“The traditional form of storytelling used to bring together the elderly, the middle-aged and the young — the whole family around the fire,” Salah said. “But now it is only among the youth that are together in these places who tell to each other; I see them reciting and singing about their own values.”

“It is not accepted yet, but I hope [the elders] will understand that this is a form of poetry and will accept it one day,” he said.

Omar knows this negative perception among elders well. He decided not to tell his wife’s parents about his poetry and rapping to avoid any difficult conversations. He thinks the lack of respect for hip-hop comes from the prevalence of songs about drugs and guns. “They hear about the guns and the drugs and think it’s negative music and doesn’t have any talent to it,” Omar said. “In a way, I would say that’s a form of expression and there’s nothing wrong with it if you have an open mind and understand there’s a bigger picture behind all the talking about guns and drugs.”

For Omar, that bigger picture is making a difference in his community and helping his fellow young East African men make good decisions. The youth group he started in 2014, which was then called “Teen Voice” while it was grant-supported, is now restarting as a simple weekly discussion and storytelling forum that aims to connect with some youth who may have lost their way or gotten involved with drugs.

“I could be a lot worse off than I am right now,” said Omar. “I’ve been around a lot of bad things, a bad crowd, but music has always been my getaway.”

Omar has a way of connecting with young members of his community that harkens back to his family roots — the core of which is storytelling. “I do come from a family of storytellers, I guess, and truck drivers,” Omar said. “My grandfather and all of his sons were well-known truck drivers and one of the families that did a lot of transportation across borders, so when there needed to be a delivery from Ethiopia to Somalia, it would be my family that would do it.”

He said that his family is bilingual, and fluent in Somali, and that storytelling was how they forged relationships: “It was their connection to people, wherever they’ve gone, they’ve been the family accepted by everyone, the family that’s gotten to know everybody.”

For Omar, storytelling is a powerful part of everyday life — and a broad concept, applicable to his music, his outreach to youth and connecting to his family history. The way he tells stories is far from the traditional East African countryside manner of sitting around a bonfire after a day of working the land, but the theme of using stories to learn about culture, identity and life.

“I try to be flexible in my poetry and music,” Omar said. “That comes from learning from a lot of people.”

This story is part of Crossing the Divide, a cross-country reporting road trip from WGBH and The GroundTruth Project. Eric Bosco is part of a team of five reporters exploring issues that divide us and stories that unite us.