“I saw a lot of black liberation, and a black utopia in a way,” said Kylia Porter, a youth apprentice at Juxtaposition Arts, in her review of “Black Panther.”

The Hollywood superhero blockbuster-and-more opens tonight worldwide, but Porter was part of an audience of 150 lucky ticket holders who took in a special screening at the ICON ShowPlace theater in St. Louis Park Thursday night.

The event was the brainchild of First Avenue’s executive vice president Dayna Frank, who teamed with the Rhymesayers hip-hop collective and the 23-year-old North Minneapolis-based arts group Juxtaposition Arts to offer free tickets to kids who might otherwise not be able to afford a first-run movie, including many Juxta students and their friends.

“Representation matters, and art matters, and music matters, and film matters, and any time you get a chance to expose young people to great art and music and film, I just think it can have a lasting impact,” Frank said of “Black Panther,” which depicts the mythological and technologically advanced African nation of Wakanda and the hero’s journey of its king, T’Challa, aka Black Panther.

MinnPost tagged along to get reactions from the screening attendees, in words and photos: 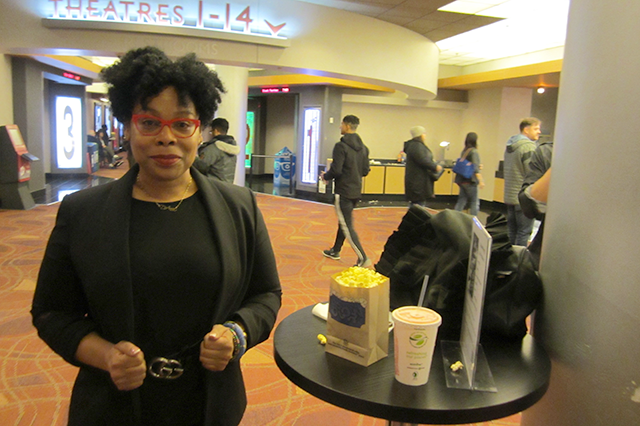 DeAnna Cummings, founder and CEO of Juxtaposition Arts: “Juxta has been around since 1995, and currently our focus is training and employing kids and young adult artists to highlight pathways to making their way as artists. This was Dayna Frank’s idea, and we’ve never done anything like this, and everybody is very excited. I’m looking forward to seeing some representation.” 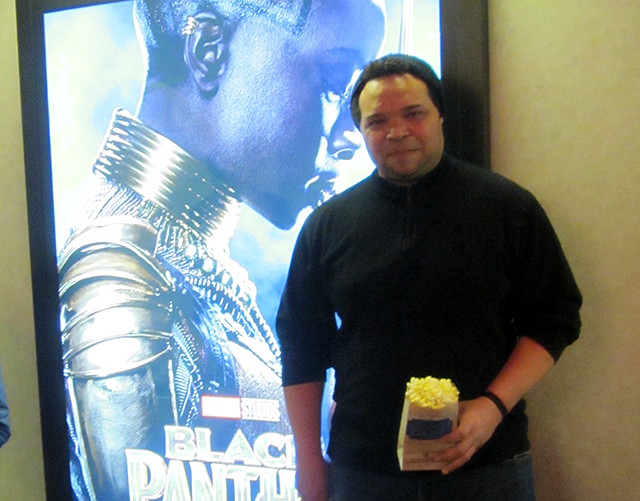 Kenneth Rooker, lead lab instructor at Juxtapostion Arts: “I’m a comic fan, so I’m excited for [the students]: [Black Panther] came around in 1966 in the middle of the civil rights movement and the women’s movement, so that has a really powerful resonance today. I’m excited that the kids are going to be able to experience this kind of prideful fictional African nation that, at least according to the way Stan Lee and Jack Kirby developed it, was uncolonized.

“It was able to develop and thrive on its own without any interference. It’s a technological wonder, and it also has a reverence for ancestry and family ties, so I’m just really excited to see them take this in. Also, the idea that the women in Wakanda are even with men, if not above them. There’s a special reverence for them, so I’m really excited to see brown and black teenage girls being inspired by these women who are intellectually and physically really strong, and leaders. And they support one another.” 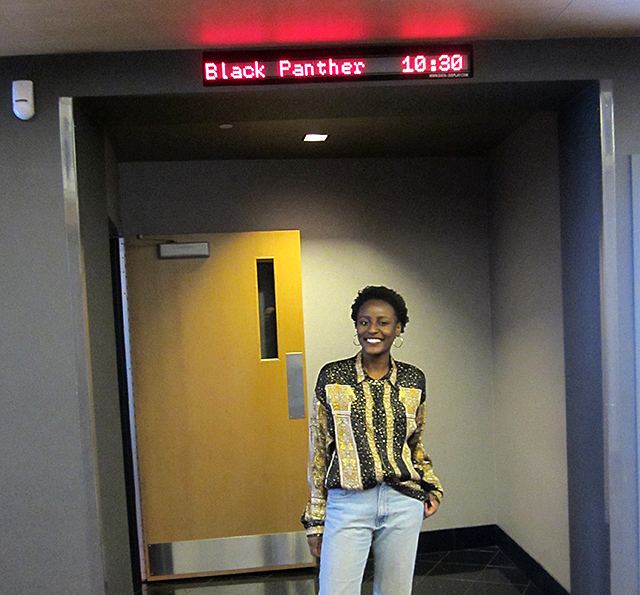 Ysa Johnson: “I work in the graphics lab and intern in communications at Juxtaposition Arts. I’m so excited. I’ve been such a big fan of Black Panther since I was a kid. I love comics, and comics are what got me into doing art so this is everything to me. What’s most inspiring to me about Black Panther is the self-determination; the idea of a country—whether or not it actually exists—that has its own history and its own future that’s determined by the people in it, and African, especially, because my mom is from Uganda, so that area of the world is really important to me. I was really happy to read books like that and to see myself in the stories, so seeing the movie is going to be great.” 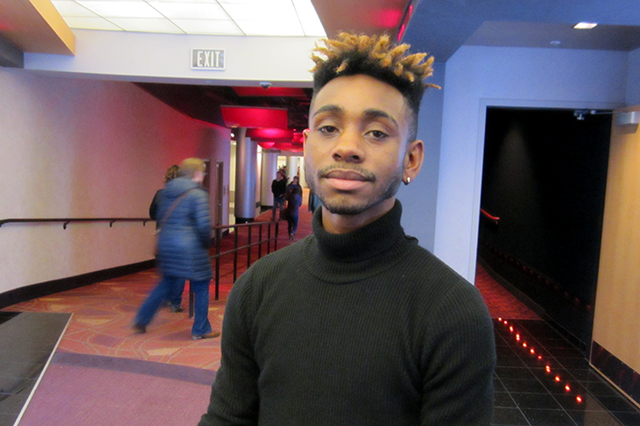 Demond “DJ” Bryant, junior art director of the Juxtaposition Arts graphics lab: “I was introduced to Black Panther the first time I went to a comic book store. I was actually looking around on purpose, like, ‘Hey, where are the people of color at?’ So I was looking around the comic book shop and I thought, ‘Hey, this guy looks kind of cool,’ and through Black Panther I found Static Shock, Black Lightning, Blue Marvel—which people don’t even know about. It was the first time I was in a comic shop. I was six, I’m 17 now.” 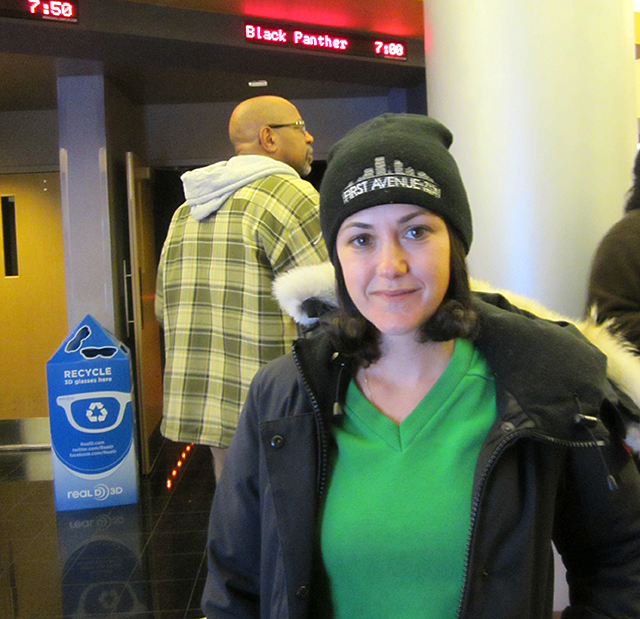 Dayna Frank, executive vice president of First Avenue:  “I really wanted to support the movie. I know that movies on opening weekend, it’s super important to boost their box office gross, and we’ve been working with Juxtaposition with them printing our t-shirts, and they’ve been our partner in community engagement forever, and I just thought, ‘How cool and how fun and meaningful it would be to make sure that their youth apprentices got to see the movie opening weekend on the big screen and maybe it will impact their future endeavors.’

“Representation matters, and art matters, and music matters, and film matters, and any time you get a chance to expose young people to great art and music and film, I just think it can a lasting impact. It can really affect people’s lives, and you can’t put a price on that.” 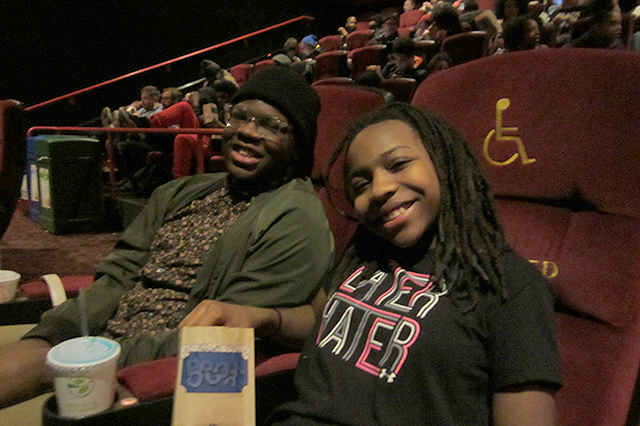 Elijah and Jersuy Buchanan: “I grew up loving Black Panther,” said Elijah. “He was one of my favorite heroes because he was actually African, and I really hope that they keep to the African roots during the movie.”

“I’m looking forward to the killin’ and the fighting,” said Jersuy. 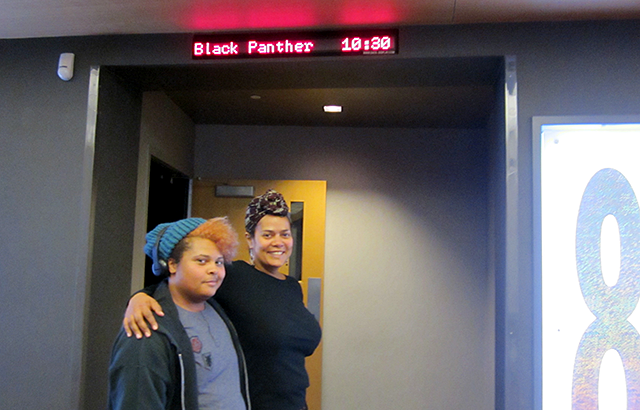 Oliver and Lola Osunkoya: “I work at Juxta and First Avenue,” said Oliver. “I’m just a real comic nerd. I really like Iron Man, I’m really into the Flash, and I also really like Thor, so I’m really stoked to see this.”

“I’m really excited for a nearly all-black cast, and a significantly black crew, and just seeing positive representation,” said Lola. “I saw a Twitter post this morning that talked about how this was the first black comic book character who wasn’t somebody’s friend or somebody’s sidekick, but a free-standing character, the main person. It’s supposed to be depicting black characters in a positive light, and that’s really exciting.”

Why First Avenue, Rhymesayers and Juxtaposition Arts put together a free screening of ‘Black Panther’