In 800 cities across America and the globe Saturday, fed-up Americans took to their streets and state Capitols to demand stronger gun laws in the first-ever March for Our Lives, the Minnesota edition of which descended on blustery St. Paul (Willmar, Brainerd, Duluth, Winona and Sartell also hosted Minnesota marches). Inspired by the surviving students of the Feb. 14 shooting at Marjory Stoneman Douglas High School in Parkland, Fla., protests filled the streets from Washington, D.C., to Seattle and all points between in an effort to get the attention of lawmakers who have thus far resisted  stronger gun control legislation.

“But that’s about to change,” state Sen. Matt Little promised the bundled-up crowd in St. Paul, which the State Patrol estimated to be 20,000 strong. One man stood alone in the crowd, silently holding a sign with a photo of slain St. Paul school worker Philando Castile and the words “Where Were You For This Gun Violence?”

The outrage and fearlessness of young and old protesters alike was palpable, as marchers brandished signs touting such fast-trending slogans as “Never Again,” “We Call B.S.,” “Gun Reform Now,” and “Enough Is Enough.” Attending the rally was Taylor Benson, Stephanie Horowitz and other survivors of the Parkland massacre, including the Marjory Stoneman Douglas High School hockey team that was in Minnesota to play in a tournament. Survivors and politicians talked about the influence of the NRA on politicians, the pervasive gun culture in America, the mental health of shooters and survivors, the need for more security in schools and universal background checks for gun sales and transfers, and raising the legal age to 21 to buy firearms.

At times Saturday, hope and optimism could be found amidst the serious proceedings, mostly during calls for moments of silence to honor all victims of gun violence and chant-a-longs of “What do we want? Gun control NOW!” and “MSD!” (for Marjory Stoneman Douglas). Spontaneous cries of “Vote them out!” peeled down the Capitol steps, and many protesters made the point that high school seniors who have led the charge will be voting for the first time in November.

“We’re the mass shooting generation. I was born months after Columbine. I’m 17 years old and we’ve had 17 years of mass shootings,” Marjory Stoneman Douglas High School’s Cameron Kasky told “60 Minutes” earlier this month. With that in mind, and a feeling of solidarity that comes with being part of a bigger movement, the overall mood at Saturday’s march (hosted by Moms Demand Action-MN, Students Demand Action-MN and Protect Minnesota) from Harriet Island to the Capitol was somber, steadfast, and looking to the future. MinnPost took in the protest, in photos and interviews: 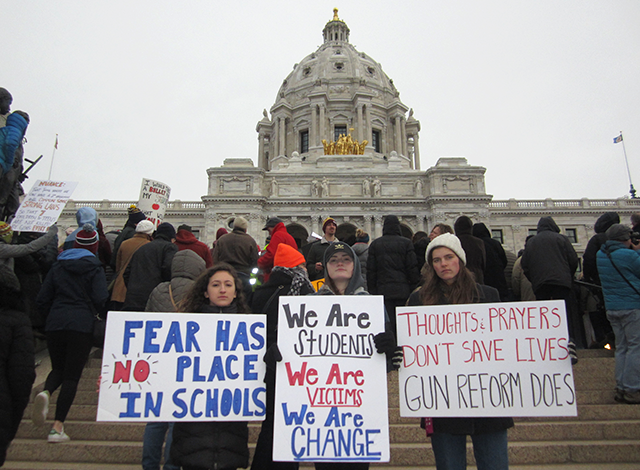 Addie Rodriguez, Aubrey Rosenlund, Beth Kutina, Eden Prairie. “We go to Eden Prairie High School. We’re all seniors. It’s so striking how the Parkland students are making a voice for themselves and standing up and getting in the government’s face. I want to be part of that movement; I want to be a change. It’s our time. We’re all going to be 18, we all can vote soon. It’s time for us to actually do something about it,” said Kutina. 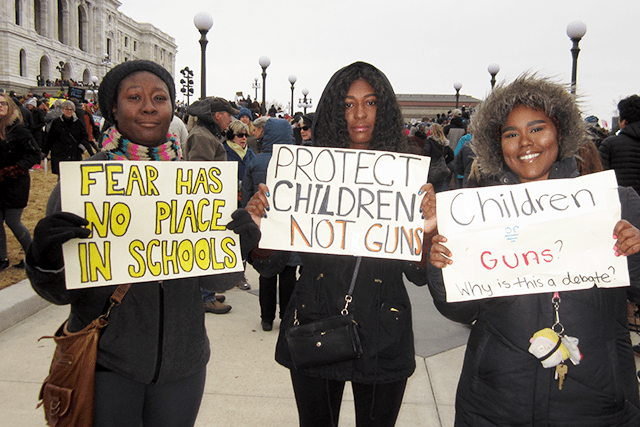 Erica Pullen, Leia Pullen, Farhiya Mohamed, St. Paul. “We’re seniors. We go to Como Park Senior High School in St. Paul. Guns shouldn’t be in school and teachers shouldn’t be armed simply because, especially dealing with inner city schools, you don’t know who’s going to get shot and nine times out of 10 it’s going to be a person of color,” said Mohamed. “Recently they just had an incident in the school with a gun being in the school so I was really scared,” said Erica Pullen. “They were at school that day. It could happen to anyone, any child, so it’s scary and I don’t think kids should have to go to school being scared, and nothing’s happening with the laws. It happens all the time and it shouldn’t. It’s like, normal now.” 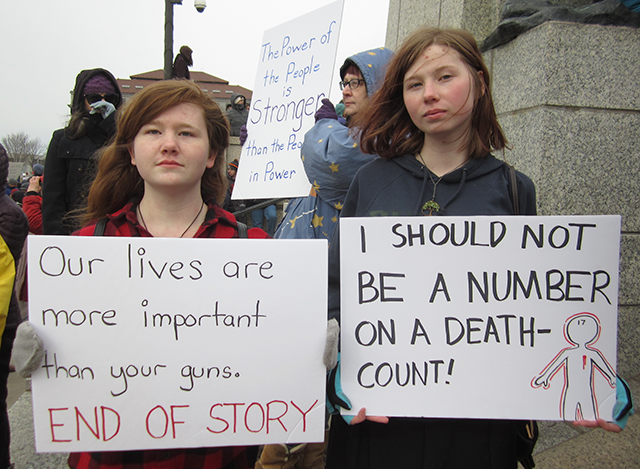 Christine and Catherine Calger, St. Paul. “I go to Colorado College. There have been way too many shootings, children are dying, and our government is doing nothing about it. It’s obvious we have a problem, and people are pretending to be blind,” said Christine. “I go to [St. Paul] Central High School. People seem to think that the rights of giving guns to people who shouldn’t have them are more important than the lives of the people who have died and people who will die, and our government refuses to do anything about it. I also think that people who say these shootings are hoaxes are disgusting.” 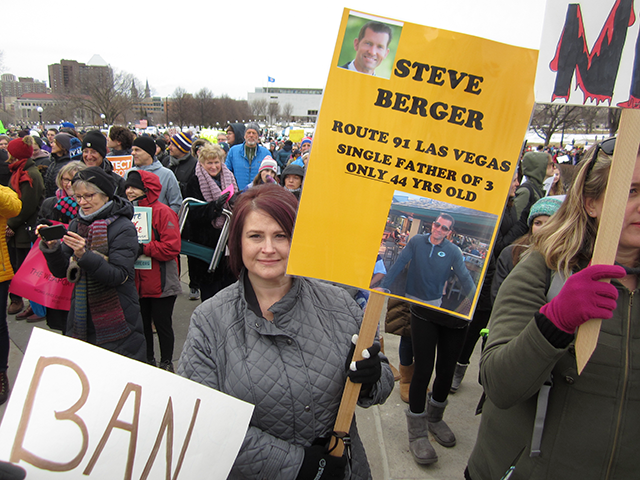 Tonia Coubal, Savage. “I’m marching for a friend who couldn’t be here today, whose best friend was Steve Berger. I told her I would honor him by caring this sign today. Steve is from Minneapolis, and he was one of the many people killed in Las Vegas.

He was celebrating his birthday at the country music festival. He left three children without a father. I’ve also got a 3-year-old child, and I’ve got to make this world a better place for him. I can’t let this happen anymore.” 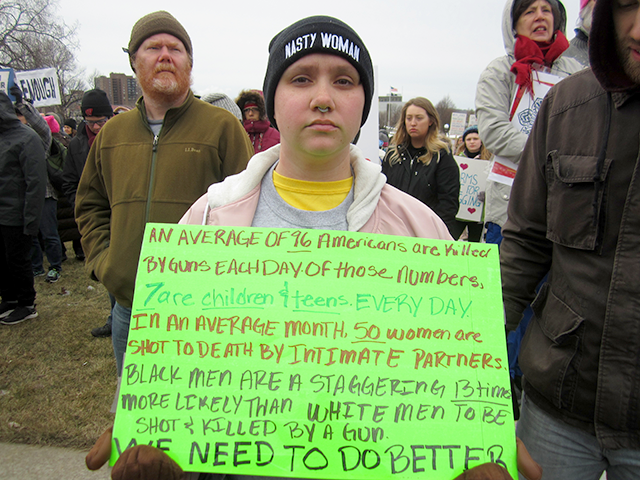 Rachael Schierman, Minneapolis. “I have two little kids who are in school, and having to worry about them coming home every day … it’s bullshit. It’s the most terrifying thing I’ve ever experienced in my entire life.” 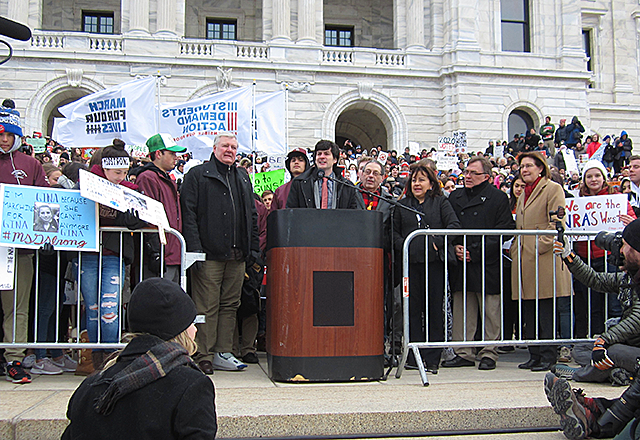 MinnPost photo by Jim Walsh
State Sen. Matt Little speaking to the crowd assembled at the Minnesota Capitol on Saturday.

“They’ve done nothing. They are doing nothing, and they plan to do nothing,” said state Sen. Matt Little (DFL-Lakeville), to boos from the crowd. “But that’s about to change.” 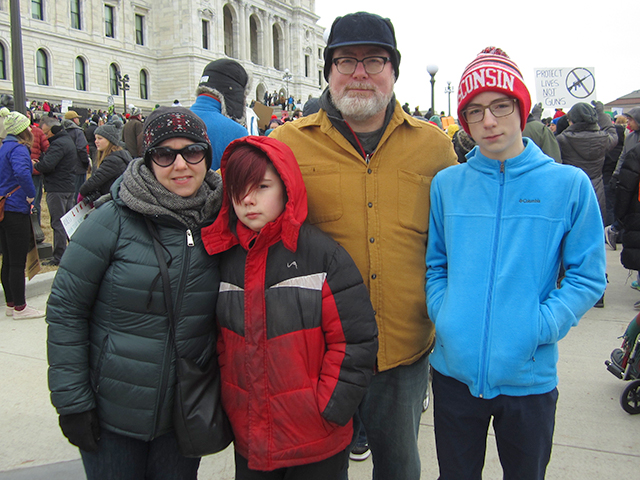 Jill, Devin, Scott, and Reid Wooldridge. “I’m a freshman at [Minneapolis] Washburn [High School]. Some people at school can ignore it, but some people live in fear of it happening every day, and guns aren’t worth that fear,” said Reid. “All my adult life I’ve been watching people get killed, story after story of tragedy in this country because we can’t think rationally about guns. It costs us in so many ways,” said Scott. “It’s hard to think that it could happen here,” said Jill. “You push it away and think, ‘It couldn’t happen here,’ but the more it happens it’s obvious it could happen here, it could happen anywhere. So we thought it was important that we show up and raise our voices to what is a real problem in our country.” 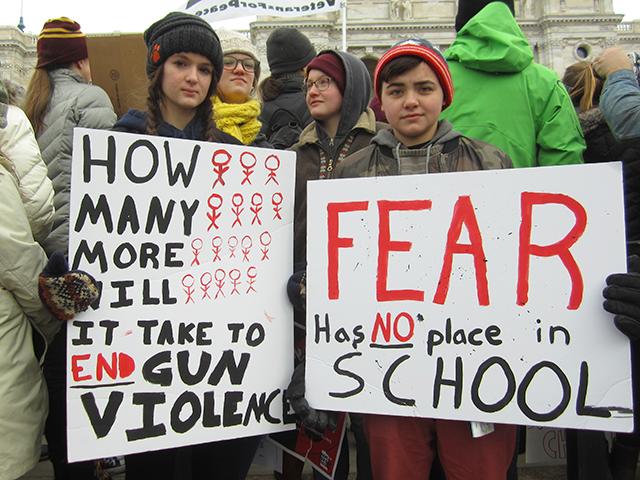 Amy Baranowski and Anthony Schaub, New Richmond, Wisconsin. “Enough is enough. We’re tired of being scared in our schools. We recently had a shooting drill in our school, and we shouldn’t have to train in school to be prepared for something like this. I’m 15,” said Baranowksi. “I’m 16. I’m terrified of seeing my friends die. That fear is very real. It’s terrifying,” said Schaub. 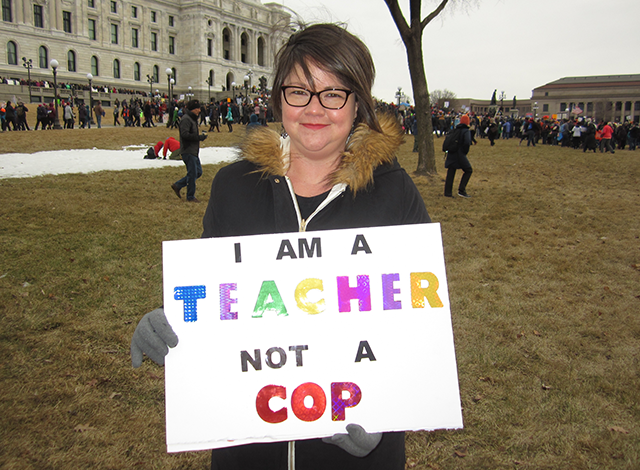 Jackie Schaaf. “I live in Burnsville and teach in the Shakopee public schools. Arming teachers is not a solution to this problem. I would never be comfortable being armed, and people who are proposing that are actually [advocating for] more guns in schools and what we need is to have no guns anywhere near a school building. The other side of my sign is ‘Fear Has No Place In Schools’ and that’s it. It’s unacceptable.” 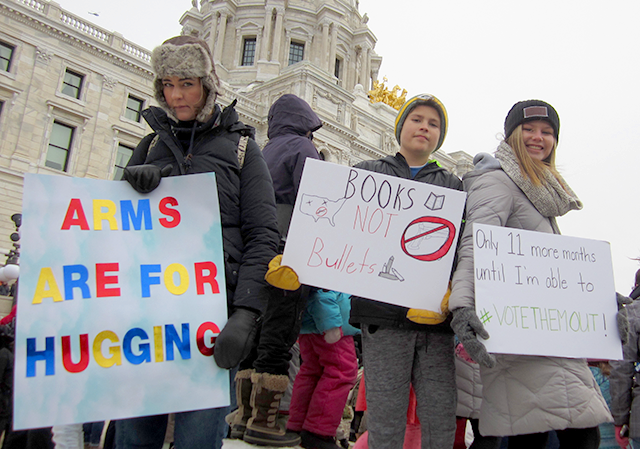 Alina Hornfeldt, St. Paul, Hans and Ella Stromberg, Mahtomedi. “I have an 8-year-old here with me today, and I want him to be going to school to learn positive social skills, not defensive social skills,” said Hornfeldt. “I’m here today to say enough guns. It’s gotta stop,” said Hans. “My mom is a teacher, and I think we should ban guns,” said Ella. 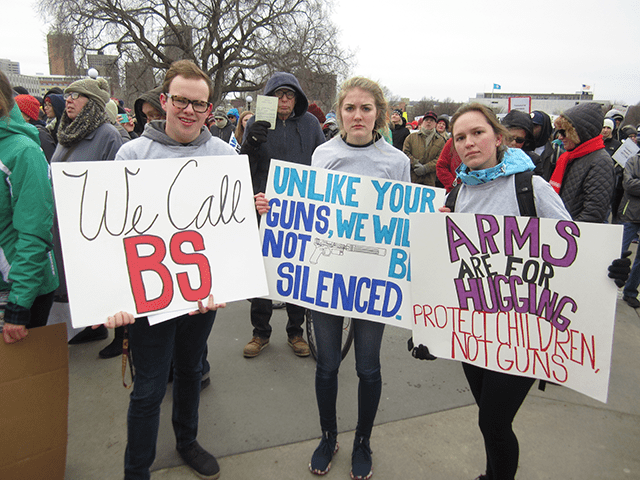 Brook Weber, Rapid City, South Dakota, Maddie Hillman, Virginia, Minnesota; Keely Zimmerman, White Bear Lake. “We’re freshman at the [University Of Minnesota]. We shouldn’t have to be scared in our schools. We have something we can do, and it’s our job to be out here to march,” said Weber. “I really admire the Parkland students, because they didn’t just take those ‘thoughts and prayers,’ and they’re taking a stand and letting their voices be heard. I think this is the start of something big, and it’s really going to change our nation,” said Hillman. “This affects us all. It could happen to any of us anytime. It’s common sense. It’s basic humanity. This shouldn’t be happening anymore,” said Zimmerman. 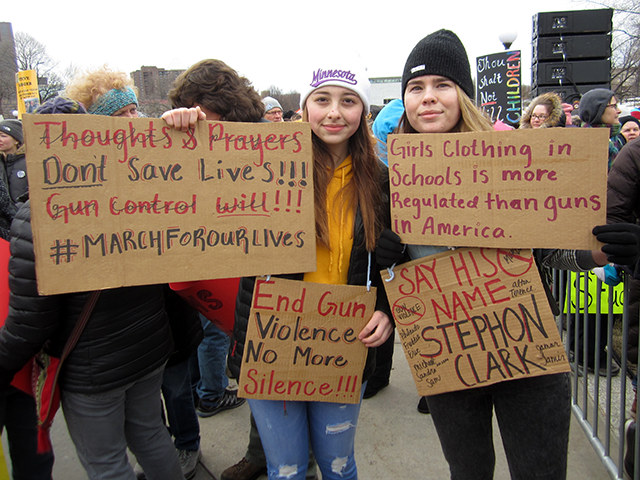 Kylee Mireault and Paige Severson, St. Paul. “I go to Linwood Monroe Arts Plus. I don’t want to be scared to go to school,” said Mireault. “I’m there to learn. I’m there to meet new people. I’m not there to be afraid for my life. When I was in sixth grade — I’m currently in eighth grade — we had a student who brought a firearm to school and it was a very scary experience. We’ve had multiple incidents like that, with weapons being brought to school. I was in a lock-down at school for 45 minutes and didn’t know what was going on and that’s why I’m here. And every day at school, I could be wearing jeans with holes in them and get called out for distracting male teachers, but like my sign says … girls clothing in schools is more regulated than guns in America.” 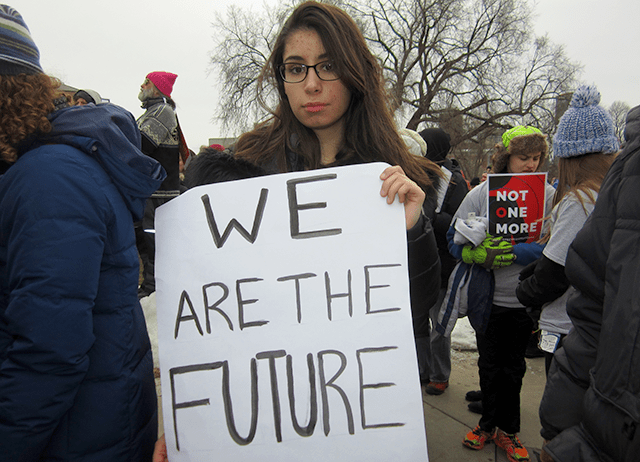 Beatrice Grant, Waconia. “I go to Waconia High School. My best friend is in Florida, 40 minutes away from Parkland, and [on Feb. 14] I got a notification that a high school in South Florida had a shooter, and I didn’t know if it was her school or not. I felt fear and pain and I didn’t know if my best friend was alive or dead. After today, I will keep using my voice, I will keep showing up to marches, I will keep protesting. We’re not going to stay silent.”