In January, at a White House meeting on immigration protections for people from Haiti, El Salvador, and some nations in African, Donald Trump infamously demanded to know why he should accept immigrants from “shithole countries” rather than places like Norway.

The same week, Rachel Ries was at the three-year-old South Minneapolis listening room and community hub the Warming House, rehearsing with her fellow choir members in the newly-formed Kith + Kin Chorus, which includes some of the local music scene’s most generous and gifted singers and musicians, including Molly Maher, Brianna Lane, Aaron Seymour, and Kate Lynch.

The topic of performing at a benefit came up, and all concerned asserted the months-old choir’s stated mission as not only a musical force, but as a homegrown change agent for good.

“From the beginning of conceiving of even having a choir, making sure it was structured in just a way that it could financially as well as other ways give back to the community — that was always very important to me,” said Ries, a recent East Coast transplant to Minneapolis. “Because as a musician, I often feel like I have nothing to give as far as money goes. But I have creativity and time and passion, so the idea of being able to convert my gifts and my cares into something that actually creates monetary change was important to me.”

All choir members agreed, and a poll was taken to determine the group’s first fundraiser’s nonprofit partner. One top vote-getter was the perpetually imperiled Planned Parenthood, but the ultimate winner (in a tiebreaker) was CAPI USA, a Minneapolis-based nonprofit that serves “more than 4,000 low-income immigrants, refugees and people of color living primarily in Hennepin County.”

“It just felt right. I mean, these are our neighbors and they need to know that they have a home here and that people have their back,” said Ries, who will perform with both Kith + Kin and Her Crooked Heart Sunday (7 p.m.) at the CAPI USA benefit at Icehouse.

“We had a list of seven, ranging from organizations that provided food and sustenance to Planned Parenthood to literacy,” she said. “I mean, there’s so much need in the world, right? So even though I’m the boss of the choir, it is all of us and the community we’ve formed, so we made a poll and it tied between Planned Parenthood and CAPI USA, and we’ll do another fundraiser for Planned Parenthood down the road.

“But it just felt like, with all the darkness with this administration and the choices being made… I just have a really big soft heart for this smaller organization that is literally providing child care for a Somali mom so she can learn English, and that is literally running culturally specific food shelves so that people who are plopped in Minnesota without access to the food and ingredients that they have always used can [make meals]. I mean, they run a community garden with like, real food.”

Representatives from CAPI USA will be in attendance Sunday, and Ries hopes the benefit further highlights the work being done by the 36-year-old non-profit.

“We started in 1982 primarily as a food shelf to serve Southeast Asian immigrants and refugees,” said CAPI USA’s Rachel Murphy. “This is the first benefit that’s been done for CAPI, as far as I know. We’re in the middle of our March capital campaign, so some of the money will go to the food shelf, but we’re also moving next month to a new building in Brooklyn Center, so this is perfectly timed to get our new space ready for clients’ basic needs, from the food shelf to health insurance and helping them find employment.”

“For CAPI staff, there’s definitely a mission,” Murphy continued. “We want to be supportive and welcoming, and obviously there’s increased challenges in this time. New policies can make that kind of challenging, but we’ve tried to continue our work like we always have: Being welcoming, and supportive, and creating safe spaces for people. We all try to stay the course and keep doing good work, regardless of what’s going on outside of the organization.” 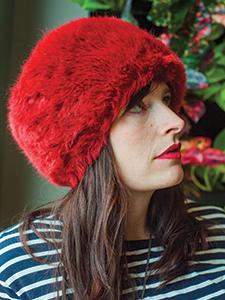 In a press release for the CAPI USA benefit, Ries describes Sunday’s sounds as “part indie choir, part poet rock” and writes: “This past fall, unable to quiet her longing for choir and her belief in the power of voices in harmony to create connection and affect change, Rachel formed Kith + Kin Chorus.” Two seasons in, the group rehearses weekly and sings selections by the likes of Feist, Neko Case, Jeremy Messersmith, Toto, and Crosby, Stills & Nash.

Anything special cooked up for Sunday?

“The final song we’re going to play is ‘Engine To Turn’ by Tift Merritt, because it really speaks to how we grapple with the uncertainty, the confusion, the mess of the world — how we as individuals handle that and keep on going. The bridge of that song, ‘Sometimes there’s a choir in my head singing at the top of their voice, ‘Don’t look back, don’t be scared, don’t be scared.’ That’s so needed. It’s very much the message of, ‘You can do it! It’s hard, but we can do it!’”

‘They need to know that people have their back’: Concert will benefit nonprofit serving low-income immigrants and refugees