It was jubilant moment celebrating the success of the night — a sale of nearly 600 tickets with all proceeds going toward the nonprofit. Then Aaron Corbin came in to ruin it all.

Corbin, the “White Kryptonite” who wore a green kilt, grabbed and repeatedly bashed Arrow’s head against an unfolded metal chair. Then, grandstanding for the crowd, he ignited  a chorus of boos as the Dropkick Murphys began blaring over the loudspeakers. A “police officer,” Robbie Thunder, rushed in to help Arrow, last seen clutching his face in pain, off the stage.

No, Grandslam 2018 wasn’t your run-of-the-mill charity ball. It’s a pro wrestling event put on by Midwest All-Star Wrestling and its subdivision, Pro Wrestling 4 Causes. More than 40 wrestlers took part in the event, which featured a 20-person battle royal, a ladder match, a cage match and a women’s match — with healthy dashes of soap opera drama along the way.

Brian Sager, himself a regional pro wrestler who for 13 years fought under the name “Hollywood Brian Sager,” co-founded Midwest All-Star Wrestling last summer with an eye toward making charitable events a part of its practice.

Part of the point is to improve the public image of pro wrestling. “Wrestling has a red sign over it, so to speak — it’s not very well received,” Sager said. “We wanted to change the perception of that. We wanted to be the group that has a lot of heart and gives back to those who need it.”

McClausland said his daughter’s diagnosis of Rett syndrome, which keeps her confined to a wheelchair, helped inspire the charity focus of the wrestling league.

Grandslam 2018 was also the first event of its kind for Women of Nations. The shelter has 44 beds in its West Seventh Street location and is always at capacity, according to David Amitrano, the organization’s finance and human resources director.  “We usually do a 5K [run] every year, but nothing of this magnitude,” he said.

The shelter, which also receives money from the state, opened in 1992. It’s mission is to serve Native American women, though Amitrano said it welcomes victims of all backgrounds. Last year, it served around 950 women and children, who stay from anywhere between 30 days to six months while staffers help them find permanent housing. The shelter employs case managers, a nurse, and a drug and alcohol abuse counselor. It’s currently in the process of bringing a mental health therapist on board.

More than 14 sponsors signed onto Grandslam 2018, donating to pay for the ticket prices of underserved kids from the community. The kids also got free a slice of pizza and meet-and-greets with the wrestlers.

Among those performers was Jacob Savage, a 24-year-old wrestler who by day works as a nurse. Savage, who is clean-cut, attempted to channel a good-guy wrestler persona in his fight against Orin Veidt, a “dark prophet” who wears the tattoo of a bull’s head across his chest and a pentagram etched on the side of his black pants.

Both fought each other in a ladder match, where the winning wrestler must be the first to grab a promotion contract hanging from the ceiling in the middle of the ring that can only be reached from a ladder. Inevitably, the match featured Savage body slamming his opponent onto a ladder placed horizontally outside the ring.

Before the fight, Savage insisted that the outcome of the match was not already predetermined. “It’s basically like an [Ultimate Fighting Championship] match, except we get paid to hit each other and not block,” said Savage, who wouldn’t reveal his birth name. “So eventually one guy is going to say, ‘That’s enough,’ and back down.”

That’s the fun of pro-wrestling, McCausland insists —“that suspension of disbelief and letting yourself get wrapped up in the stories that are being told.” 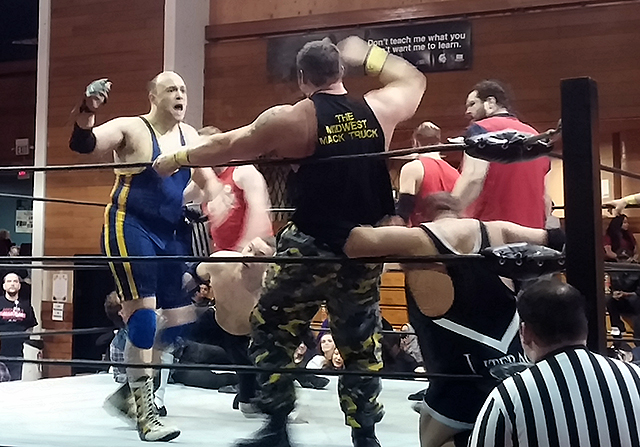 MinnPost photo by Joey Peters
Grandslam 2018 was the first event of its kind for Women of Nations.

Craven Knight, a veteran 31-year-old wrestler who won a hard-fought match Saturday night, called his craft “a big performance art unlike any other type of entertainment out there.”

During a brief intermission before the final two matches, members of Natives Against Heroin sang a blessing song about a warrior, and dedicated it to the wrestlers performing that night. The group aims to help people recover from drug addiction and works primarily in the Little Earth of United Tribes housing project located just blocks away from the American Indian Center.

“We basically came out here to represent our community,” said Teresa Nord, a member of the group.

The crowd drew heavily from the East Phillips community, which includes the largest concentration of urban Native Americans in the country. Nord added that she recognized a lot of neighbors attending the event.

Eddie Cope and his son Evan were among those who showed up. Both are pro-wrestling fans but hadn’t heard of Midwest All-Star Wrestling before attending the Saturday event.

Joey Peters is a reporter for Sahan Journal.

A cage match for a cause