Even today, the vacant lots on St. Paul’s West Side are incongruous. Acres of empty land sit a block from the Mississippi River. An abandoned strip mall falls apart over a decade. Overgrown fields of buckthorn lie in downtown’s shadow, not half a mile from City Hall, waiting for something to happen.

The West Side Flats have been this way for more than 50 years. Underneath the surface, the empty lots and overgrown trees form a symbolic grave for the old neighborhood that once thrived here. Like many victims of destructive 1960s planning, the working-class homes and shops were infamously bulldozed by city leaders, leading to displacement and dislocation in the name of progress. Much of the old flood-prone neighborhood became an industrial park, parking lots, a smattering of office buildings. (After the demolition, a floodwall was constructed to protect the neighborhood from the river, a fact that continues to irk people who remember what happened there.)

But after a half-century of neglect, things might finally be changing. Signs of development are starting to stir. A mixed-use apartment building sits at the base of the Wabasha Street Bridge, and plans for another one have been approved.

They’re the first significant construction on the West Side in over 10 years, and the potential changes have neighbors on edge.

“There has been conversation about development at the corner of Plato and Robert,” said Carol Swenson, a long-time West Side resident. “There are awful vacant buildings there and there’s a developer interested in that property. We also have started having conversations with a longstanding West Side family that owns a lot of the property around Wabasha on north side of Plato. They are looking to future and potential redevelopment opportunities.”

The potential changes have prompted a robust discussion in the community about what kind of development they would like to see, and how to handle the predictions of construction cranes. Over the last year, the local neighborhood group, the West Side Community Organization, has been working on what they call the “equitable development scorecard” that it could use to evaluate future development in the neighborhood.

Engaging a broad range of residents

The scorecard, now in its draft form, is intended to counteract the possible side effects of neighborhood change — in other words, gentrification.

“With gentrification, I’m talking specifically about my own opinion,” Katrina Mendoza included as a caveat, “a community can’t gentrify unless it becomes profitable. Gentrification on the West Side is the displacement of cultures of communities and families that already live here. It’s communities that are already here being erased, and other folks moving in and taking over.”

Mendoza is doing a lot of the community organizing around the scorecard, and has been intentional about trying to get a broad section of West Side residents — especially traditionally disenfranchised, as she describes, “youth, immigrant populations, folks with different abilities, low income people and families, indigenous people and our elders” — to weigh in on development decisions at the neighborhood scale. She hopes the scorecard will be a useful tool to engage with these different groups.

As Mendoza and WSCO Executive Director Monica Bravo are quick to point out, the scorecard is not an original idea. Rather, it comes from community efforts around the country and region. The template that WSCO used to in their community conversations came directly from Minneapolis’ Harrison Neighborhood, and emerged from a grant-funded collaboration with University of Minnesota’s CURA, the Alliance for Metropolitan Stability and other groups.

But as is the goal for flexible tools, communities on the West Side have put their own stamp on it. “It’s taken a while for folks to pick it up and run with it, but folks are adapting [the scorecard] to the West Side,” Bravo explained. “We were the first St. Paul community to pick up the scorecard and attempt to adapt it for the purposes of economic development.”

While I like to picture it as something akin to figure skating judging, where a skeptical panel grades development attempts according to complicated metrics, in actuality the scorecard is chock full of specific categories. As a tool to make community desires more transparent, the hope is that, with the scorecard, both developers and residents can better understand at a glance what people community members want.

Take, for example, the goals around transportation. The scorecard has seven categories, graded on a 1-5 scale, for things like connecting walking biking and transit into a regional system, or traffic calming.

“We are trying to give the impression to developers that, whatever kind of development comes into the community — retail, industrial, housing — that it is close to public transit lines, or areas where they can put public transit,” said Martin Hernandez, who moved to St. Paul from Los Angeles earlier this year.

After experiencing the increasingly unaffordable housing market in his old California neighborhood, Hernandez has become interested in helping with the scorecard project in his new neighborhood in the hopes of avoiding some of the housing tensions in his old city. He was one of the leaders of the transportation conversation guiding that section of the scorecard. “We want to see the developers try to maintain the stops and help pay for the transportation hubs that would be developed there,” Hernandez explained.

Categories can be complicated

Just as with transportation, some of the other categories become complicated very quickly. It is easy to imagine wildly different scores coming out of the scorecard process around topics like “community engagement”; a sample question: “Project was initiated by the community, or developers and planners partner with the community to develop their community engagement plan BEFORE the project starts.” People are asked to score that on a 1-5 scale.

Most urban neighborhoods have a story to tell of being at the wrong end of civic power structures, but the story on the West Side Flats is particularly damning of civic leadership. The displacement and forced removal of hundreds of homes, entire streets, and rows of businesses in favor of the current landscape of parking lots, low-slung cinderblock buildings, and vacant lots of overgrown weeds has been a festering wound for a half century.

For people concerned about change in the neighborhood, that history should not be brushed aside.

“For growth, and all of the art, and their organizations and their businesses … we want all of that,”  Mendoza told me. “But keep in mind that there’s already a community that lives here. We want folks in our neighborhood to be able to not just sit at the table, and not just sit, but have a voice and a vote.”

Still, though, the existing landscape is not doing the community any favors. Acres of sparsely used buildings, vacant lots, and parking lay between a resurgent downtown St. Paul and the homes and businesses of the West Side, and they offer little to the surrounding neighborhood other than a hardware store, a post office, and a 24-hour gas station. Most people seem to want change, while remaining wary of some of the consequences that might come with those increases in density.

“We are not anti-development, we are pro-development,” explained Bravo. “However, we believe the question of who benefits is really at the heart of the scorecard. With the disproportionate high industrial uses that the West Side has shouldered in the City of St. Paul over decades, it is necessary to create a tool that centers our community in decision processes. Can we invest in such a way where we are intentional and plan-ful of the long term effects on the existing community?” 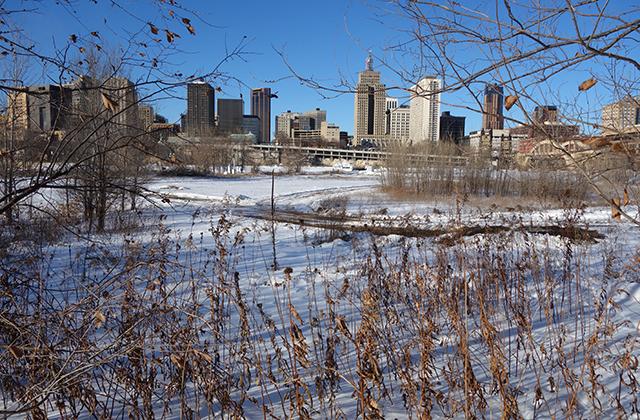 MinnPost photo by Peter Callaghan
Acres of sparsely used buildings, vacant lots, and parking lay between a resurgent downtown St. Paul and the homes and businesses of the West Side.

After a half-century of stagnation, the vacant parcels might be finally seeing some positive, more site-sensitive development. And yet there seem to be a few different paths that the West Side flats could take. Will these acres become high-end apartment housing, catering to some of people currently moving into downtowns? Will they become affordable housing for people who need it in St. Paul’s lower income neighborhoods? Will it remain vacant property for another generation?

The answer remains up in the air, but if the WSCO scorecard works out, people on living on the West Side may have more ability to shape the conversation.

How one St. Paul community is using an equity scorecard to direct neighborhood change