On the 3rd floor of the Minnesota History Center in St. Paul, a 9 year-old boy stands in front of an aqal, a nomadic Somali home. He taps a camel bell and smiles at his father, who leans in to explain. “They’ve never been to Somalia,” says their father, Rople Hussein, who is originally from the country. “I wanted them to see this.”

He wasn’t alone. Over 2,000 people came to the opening of the Somalis + Minnesota exhibit last weekend. The new exhibit spans three rooms that focus on “Traditional Life,” “History,” and “Life in Minnesota.” The rooms are well-stocked with photos and artifacts, some of which were recently brought from Somalia specifically for this exhibit. “This scale, in terms of Somali history exhibits, is new for the Minnesota History Center and for the state,” says exhibit developer Kate Roberts.

Visitors are encouraged to walk through to the “Traditional Life” room and work their way forward to “Life in Minnesota.” Most eye-catching in the “Traditional Life” section are two houses: one is a model of a Modul, or wood-and-mud hut in a style often seen on farms and in small towns; the other is an aqal, which is favored by nomads. The woven mats that make up the aqal were shipped in pieces from Somalia, where 25 percent of people are nomads today. And the massive mural by Twin Cities visual artist Abdiaziz Osman depicting a brilliant blue sky and land dotted with trees and livestock makes the space feel open and warm.

There’s plenty to learn as visitors move through the short history section, all presented in easily digestible segments. Headings in both English and Somali guide visitors succinctly from ancient times through colonization and civil war, to today. Those who have only seen images of Somalia in the news, if at all, might appreciate the plentiful photographs. Indeed, a highlight in this section is a display of contemporary photographer Abdulkadir Mohamed’s work, which aims to show “the positive side of the country and the resiliency of the people.”

Each room has something interesting to offer, but the jewel of the exhibit might well be the Minnesota room, which highlights individuals who have made contributions to their community and the state. They are entrepreneurs and politicians, artists and athletes, educators and social workers and more. Each panel has photos, quotes, and people’s stories, some printed front-and-back. 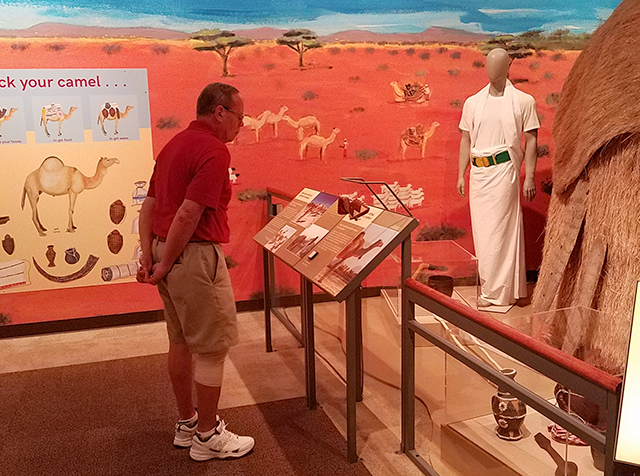 “It’s beautiful” says Imam Hassan Jama about the colorful display of faces in the exhibit. “I believe Minnesota has acknowledged the existence of Somalis. I feel inclusiveness.” Jama advised on the religion section of the exhibit, and he says he knows most of the faces on display.

What Jama finds most moving, he says, is the timing of the exhibit. Four days after it opened, the U.S. Supreme Court upheld the so-called travel ban, which — among other things — suspends entry to the U.S. for immigrants from Somalia, a decision that Jama calls “offensive to the Somali Community.”

Coming to this exhibit, he says, “it’s good timing. I feel relieved seeing this. It a little bit minimizes the load of Islamophobia that I live with. I’m grateful and thankful.”

The Somalis + Minnesota Exhibit began as a conversation four years ago, and the exhibit itself has been a year in the making, said Osman Ali, Founder and Executive Director of the Somali Museum of Minnesota, which contributed many of the artifacts on display.

Ali, who says the response to the exhibit has been “amazing” so far, hopes that by highlighting the positive contributions Somalis have made to Minnesota, the exhibit will inspire the next generation of Somali-Americans to do the same. 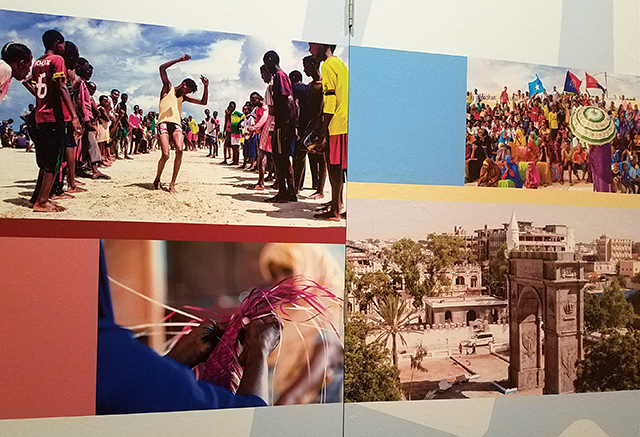 For non-Somalis, it’s an opportunity to learn more about the community. The exhibit is staffed with Somali speakers most of the time in order in order to answer the questions of both English and Somali speakers.

“What are your hopes and dreams for the Minnesota Somali community?” asks the final panel before visitors leave the exhibit. A drop box awaits their answers, and some early responses are tacked to a bulletin board. Says one: “That they find peace and prosperity here in Minnesota and feel as much at home here as all the other immigrant groups who’ve become part of the fabric of our state.”