The founders of the Minnesota African American Heritage Museum and Gallery had no idea how many people would show up to the museum’s grand opening festivities Saturday morning, but by 9 a.m. there was a line outside Plymouth Avenue, and a steady stream of museum-goers filled the museum all day. Located on the fourth floor of the Thor Companies building on the corner of Penn and Plymouth, the museum is a long-time coming first of its kind in Minnesota. MinnPost took in opening day, in words and photos. 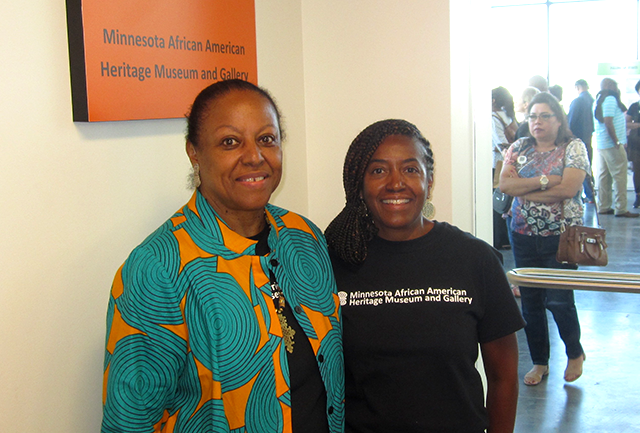 Coventry Cowens and Tina Burnside, museum founders. “We started working on the museum in November of last year,” said Burnside, a civil rights attorney, writer, and historian. “I was born and raised in Minneapolis. I grew up on the south side. Minnesota is one of the few states that does not have an African-American history museum. African-Americans have been in the state since the 1800s, but a lot of people don’t know that. They think we came here in the 1960s, but we’ve been here a long time and have contributed to the growth and the vibrancy of the state. One of my favorite pieces here is The Minnesota Voices of the Great Migration, which really shows the history of African-Americans who moved from the South, where they were facing lynching and oppression and discrimination, and they moved north to places like Chicago and Kansas City and Detroit, but also to Minneapolis.”

“The museum allows the community to have a focus of pride,” said Cowens, a philanthropist and women’s rights advocate from Minneapolis. “There have been many ideas and many stops and starts for [proposed African-American] museums in Minneapolis. We basically started last summer, with some high-level conversations, some community conversations, and we just basically beat the bushes for anyone who would listen to our story.”

Pamela Richmond: “I was born and raised in north Minneapolis. This is all of our history. It’s great having this museum, so we can be seen and have our history be known. Why hasn’t there been an African-American museum until now? Do you really want me to keep talking about this? It’s because it’s such a racist state. I was born here, and I did not realize until after I was older, how racist this state is, and also I learned that it’s the second-worst state in the country for people of color. Isn’t that sad? That is why this is important, and I thank the Thor Companies for supporting this.”

Sandra Freeman: “I’m a huge museum person. I’m a retired flight attendant, so in every city and country I go to, there’s one thing I always do, and that’s museums. Particularly African-American museums. I’m from Chicago, so the DuSable museum is my heart, and of course that’s where President Obama’s museum will be.

I’m visiting the new lynching museum [in Montgomery, Alabama] later this year, and that will be powerful. Museums are the best connectors for history — for everybody, not just African-Americans, so I’m glad to see non-African-Americans here, because the more you learn about our history, the closer we come together. ”

Josie Johnson: “It’s important to actually have a visual of who we are as a people in Minnesota, and to have some reference of how long black people have been in Minnesota and the contributions they’ve made in the state of Minnesota,” said historian, activist, professor, and former director of the Minneapolis Urban League Josie Johnson.  “It’s important for us as a people to understand the depth of our engagement. We can tell our children the story. Our children need to know who they are, and that they belong, and that their ancestors’ way of life — sharing, caring, loving — still exists. I’m very happy to be here.”

Denetrick Powers: “I’m the managing director of the Copeland Arts and Training Center. This museum is important, because you have to know where you come from to know where you’re going. I believe that the Thor Companies moving to this intersection is acting as a catalyst for the north side — social catalyst, economic catalyst, cultural catalyst.

Mahmoud El-Kati: “This is the kind of thing we need to do more of in the light of black people’s history in this country, and I think this is a revelation that helps to destroy the social death that black people live in America,” said professor, writer, and historian Mahmoud El-Kati.  “By social death, I mean we’re not visible, we’re not people, we’re not a part of America’s story. Well, that’s not true. I think that’s a lie, not just a myth, but a lie. And this is an example of revealing that we were here, we’ve always been here, since before the Mayflower, and we’re equally a part of the story of Minnesota. Black people were here before Minnesota became a state.”

August, Kara, Taylor, and Avery Cisco: “I live in Minneapolis, not on the north side, but on the south side, but because there’s such a small group of us, ‘us’ being people of color, it’s like the whole city is our neighborhood,” said Taylor. “I do work in the north side and I’m connected to the community, so I’m glad the museum is here. It’s also an opportunity to teach our girls this history. There are not a lot of places that focus specifically and solely on the African-American experience, so when there is something like this, it makes you want to come out and show our support and make sure it thrives.”

Landis Hill: “I’ve been surprised at how much history I didn’t know, and how much I’m learning about my culture. You think you’ve known it all, and you come here and you realize there’s so much more to learn. It’s just new and fresh history for me.”

Shirlee Callender: “I’m portraying Amanda Lyle, who was an African-American woman who celebrated John Brown, who did a lot of things for African-Americans. She wanted to recognize the Caucasian race, especially John Brown, because he was one of the greatest white abolitionists in the country. This [museum] is something that should have been here many, many years ago, and finally they got the opportunity to do it. I think it’s a wonderful, wonderful thing to say it is ours. I just feel blessed that I’m here to see this.”

‘A Revelation’: Scenes from opening day at the Minnesota African American Heritage Museum and Gallery