“Collective Joy” is the theme of this year’s FLOW Northside Arts Crawl, a three-day celebration of the arts in North Minneapolis that opened Thursday at various venues and continues Friday through Saturday. Joyful, that it is, and more: Described as “a self-guided tour of studios, galleries, commercial and vacant spaces over a mile and a half of the West Broadway corridor,” the 13-year-old Minneapolis staple was edifying, inspiring, and yes, joyful throughout. In words and photos:

Farrington Llewellyn and Kya White. “I’m with the West Broadway Business and Area Coalition. I’m a hip-hop artist, I’m a photographer, I’m a videographer, and I’ll be taking pictures of FLOW this year, trying to capture the ‘Collective Joy,’” said Llewellyn. “Because that’s what FLOW is all about. FLOW is about a community coming together through the common cause of art, which expresses the vibrancy in our neighborhood.”

“I’m a juggler,” said White. “I participated last year, and if I do participate in FLOW this year, it will be with my juggling.”

Hawona Sullivan Janzen, curator of the UROC gallery. “This year for FLOW, we are partnering with three different artists who have work in the space: Amoke Kubat, of the artist collective Yo Mama’s House;  an installation about the societal cost of the lack of affordable housing (“The Moving Walls of Minneapolis”) that was done by artist Nikki McComb, who’s also a Northsider, and then we have a really lovely collage installation/exhibit from another Northside artist, Keegan Xazi.

“I really love this one, by Keegan. It’s called ‘She’ll Swallow Us All Whole.’ And it’s about the environment and Mother Earth and how Mother Earth is giving and kind, but when you cross the line with them… there’s going to be some work to be done.”

Amoke Kubat: “My organization is called Yo Mama, and I do the art of mothering. I believe mothers are the central core of everything; nobody’s born without a mother. So we need to be in the conversations about water, about climate change, about emergencies, about everything. Today we are going to get a survey around water for the Northside community; also we have [volunteers] here to take healthy heart scans for the public.

“I’m a mother and I just see the relationship to nurturing and keeping things alive is our central core business, so we learn to take care of our families and our communities, and we’re artists at it. We create things out of nothing.”

Keegan Xazi: “This is a piece I did in 2013 called ‘For Trayvon.’ I did it during the [George] Zimmerman trials. It’s almost like cross sections of a garden, and you pull out a time line, so there’s the roots of time and then all these images talk about the slave trade, African origins, how religion was a part of that, the money, coming to America, we have nooses there; obviously that’s about what’s going on right now, and then my biggest theme in this new work is how technology affects all of us.” 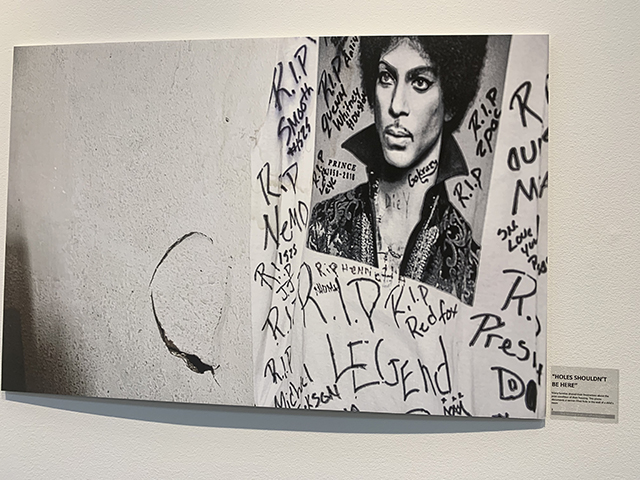 “Holes Shouldn’t Be Here,” part of Nikki McComb’s exhibit “The Moving Walls Of Minneapolis” at UROC, part of the FLOW Northside Arts Crawl.

Coventry Cowens, co-founder of the Minnesota African-American Heritage Museum and Gallery: “Our museum is a participating FLOW venue, and we’re also hosting a FLOW fashion show Saturday that will be taking place from 2 until 8. ‘Keep On Rolling’ is the name of the new exhibit. Major Taylor was a speed cyclist around 1900 and many clubs around the country have taken up his name to celebrate his achievements. He was the fastest cyclist at that time, and they touted him like they would a football player or celebrity that they do nowadays. So this club here is celebrating 20 years, and they wanted to have this [exhibit].”   Major Taylor piece in the “Keep On Rolling” exhibit at the Minnesota African-American Heritage Museum and Gallery, part of the FLOW Northside Arts Crawl.

Charles Caldwell of the C. Caldwell Fine Arts Gallery and Studio: “We’re currently at the Minneapolis Urban League on the corner of Plymouth and Penn in North Minneapolis. I have a portrait collection here in the Urban League of 25 portraits illustrating black history and first accomplishments of African-Americans in Minnesota. That includes the former St. Paul police chief Corky Finney; Sharon Sayles-Belton, the first black mayor of Minneapolis; Nellie Stone Johnson, former labor leader, activist — I’m really excited about how that turned out. In fact, I’m really excited about this whole collection and how they turned out. This collection has been in here since the Urban League opened in 2000. It opened with the building.”

The FLOW Northside Arts Crawl continues on West Broadway Friday through Saturday at various venues. For schedules and more information go to www.flownorthside.org.