Hmong kids in North Minneapolis are putting pressure on the police department to assign a Hmong cop to their neighborhoods during the day.

Set aside the funeral garb. The tax-return check off to benefit the homeless and hungry has been resuscitated and restored to the Senate’s omnibus tax bill, which is headed to the Senate floor.

For 17 years students like Ryann Kelly have left warm beds to sleep outside to experience a very little of what homelessness means.

While some are brainstorming ways to get taxpayer money for a new Vikings stadium, this group is thinking just as creatively — to get money to the poor and homeless.

Nancy Maeker, a Lutheran pastor, has a vision: End poverty in Minnesota by 2020. I talked with her about the goal and what’s being done.

Jae Jae Brooks was a disadvantaged kid living a life of adversity who achieved her dream of graduating from Carleton College. Here’s how she did it.

“The tough economic landscape of the past few years, coupled with the recent shrinking of the safety net, has made life a lot tougher, especially for those already living on the margin,’’ says the director of the Wilder Research survey released toda

You might suppose this family from St. Louis Park would want to bury their memories of nightmare hospital days.

The Great Recession has brought on a surge in volunteerism: more than half of 280 Minnesota non-profit and government organizations report an increase in volunteer service hours and 44 percent more people asking about volunteering.

A conversation with Magaly Miralles, a teacher in Eagan who had just been recognized for her work with children from a rainbow of backgrounds, got me wondering: How many teachers of color are there in Minnesota schools?

Teen birth rates in communities of color in this state are among the country’s highest, which helps explain why a Minnesota organization has started offering what it calls “culturally specific” trainings to encourage open conversations about sex and

Minnesota Compass is a new, centralized source of data presented in a user-friendly, easy-to navigate website that will tell you almost anything you would want to know about a community — and about what’s working and what’s not.

Prompted by startling research about the sex trade in North Minneapolis and efforts of a University of Minnesota researcher, a local church is trying to provide a safe haven for victims of prostitution.

For those kids not making the grade in math, Edina is trying an experimental approach: E-math classes, a hybrid of human and computer-generated math tutelage.

For years the East African Women’s Center in Minneapolis has been teaching women from East Africa English and the skills to deal with the challenges of life in America. Now the center faces a major challenge of its own.

Fresh figures reporting HIV cases among black women in Minnesota are prompting efforts to increase awareness and teach prevention to the black community.

An after-school program for kids in North and Northeast Minneapolis is aiming to prevent and decrease childhood obesity. The program targets African American and Hispanic youth, and it’s becoming popular with kids. 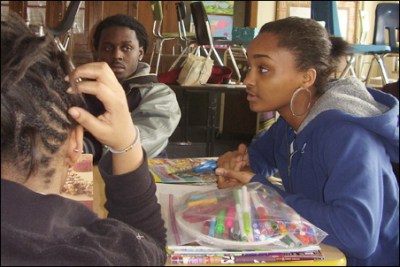 There’s a new report out today showing that 13.8 percent of Minnesota households last year didn’t have enough money to buy food. And in the Minneapolis-St.Paul-Bloomington area, the “food hardship rate” for households with children is 18.6 percent.

After hearing a speaker talk about homeless youth, Monica Williams wanted to do something to help. So she and six other women started researching the needs of kids, and soon helped establish a pilot program to help children in Bloomington.

A growing number of Minnesotans — many from middle-class backgrounds — fear going to bed hungry and are turning to emergency food shelves. Here’s one example of a family living in St. Paul Park.