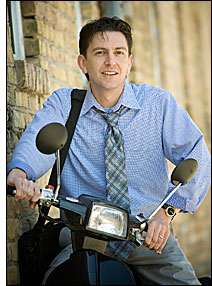 We never planned on this happening. But it did. Sometime between college and our first mortgage, a strange phenomenon began replacing our youthful mojos with a newfound maturity. And we didn’t see it coming.

Our two-door coupes morphed into sliding-door minivans. Bar-hopping turned into movie nights on the couch. We used to send “Viewer Mail” to David Letterman. Now we write letters to the editor. And golf? It’s not funny to suck anymore.

Despite our best intentions to remain forever carefree and juvenile, we’ve instead grown reluctantly responsible and surprisingly stable. For those of us pushing into our 30s and beyond, we’re starting to face our life’s biggest shocker.

The inevitability of adulthood?
What makes someone an accidental adult? It’s largely a matter of resistance. Many accept the inevitability of adulthood and embrace it. They resign themselves to lives of responsibility, serious endeavors and a sensible wardrobe. They check their smoke detector batteries twice a year. They know what kind of gas mileage their cars get. Some can even name their city councilperson.

But some of us join the world of adults kicking and screaming. Yes, technically we are adults. But more importantly, we are reluctant grown-ups who refuse to accept we’re just like every other chump with credit card debt and an aching lower back. When we look in the mirror, the person we see staring back is decades younger and way cooler.

For me, life as an accidental adult has many advantages. Instead of friends calling me to help them hang Sheetrock, I’m the one they call to answer late-night music trivia questions. No heavy lifting there. If a colleague needs a ride to work, I usually can’t offer him a lift. My excuse? I often commute on my 1986 Honda scooter.

And when the backyard parties start, no one expects me to build the best bonfire in the cul-de-sac. That’s for the real adults. Guys like me hand a few sticks to the fire-starters and then stand back at a safe distance chatting with the cute young wives while their inattentive husbands debate the ideal tinder assembly. Have at it guys. Some more wine, ladies?

Acting my age but not losing my cool
Some could say this approach to life seems irresponsible. So to avoid this criticism, I’ve found that it’s sometimes necessary for us accidental adults to fit into the real world of indoctrinated adults as best we can. I call it, “Acting my age without losing my cool.” How does it work?

Whenever necessary, I try to project an outwardly adult appearance. In other words, I act like I care. At the same time, I channel my inner Eddie Haskell and maintain an unspoken dialogue with myself that reminds me, I’m really not one of them — and that’s just fine.

Does this sound familiar?

When someone tells you, “It’s not the heat, it’s the humidity,” do you act as though it’s the most brilliant revelation you’ve ever heard, but inside, you’re calling the guy a moron? Or when a neighbor tells you she was outraged by a noisy all-night party down the block, do you agree it’s a shame that people are so rude these days — except quietly you’re praying she didn’t see you stumbling home from that house last night?

Accidental adult trapped in all of us

See, despite claims to the contrary, I’m convinced there’s an accidental adult in all of us. It’s just that some of us tap those social survival skills more often than others.

Now I’m willing to bet a psychiatrist would tell me my perspective on adulthood is really just a coping mechanism to avoid the often-times crushing reality that I’m a married man responsible for a mortgage, three kids and replacing the furnace filter regularly. Or that I seem to be treading water in a sea of rising expectations for accomplishments that are no longer considered spectacular, but rather expected of me.

Could be. And I suppose I’ll get a therapist someday soon like real adults do and find out for certain.

But in the meantime, I’m comfortable knowing that I’m in good company. Every day I see evidence of other accidental adults like me — people my age who don’t know how to use jumper cables to restart a dead car battery, or people who can’t taste the difference between a Cabernet or a Chianti. And the best part is, they really don’t care. Why? Because they know life is too short to worry about succumbing to adult convention at every opportunity — especially when ignoring standards and embracing your inner smart-aleck can be tons more fun.

OK. So as we get older, we might get panicky about parking downtown for an after-work happy hour. And we may not drive hundreds of miles to reunite with college buddies for last-minute keggers as often as we used to — unless we can sneak in a little power nap first.

But accidental adults like us really are on an important journey nonetheless. A journey from the carefree playgrounds of the sophomoric life to the more solemn soils of adulthood. It may not be the road trip we had bargained for, but why not have a little fun along the way?

Colin Sokolowski lives in Vadnais Heights, where he writes essays about his journey as a reluctant grown-up. His writing is available at www.accidentaladult.com.