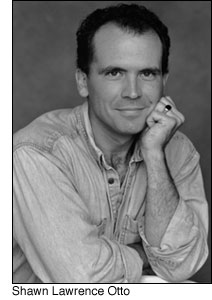 It’s mid-morning, mid-April. Sunny but not hot yet. I’m pretending to write. My desk is piled with partly read papers, screenplays, books, bills and a big hairy project that’s starting to take over everything. Somehow I’ve gotten myself into chairing the Loft’s search committee “for the next Linda Myers,” as it was put to me. Looking over the first of the applications, I am beginning to realize how impossible that task will be.

That’s when the phone rings.

“Jocey,” as she’s called by the hundreds of people who apparently consider her a close friend, is Jocelyn Hale, the chair-elect of the Loft’s board and co-developer of its new strategic plan. With her boundless energy, her 2-foot smile, and her love of books and writers, she’s been encouraged by many people I know to apply for the open executive director position. “Sure, what’s up?”

That’s when she tells me she’s quitting.

What do you mean?

Jocey’s been such a force of energy and good will on the Loft board over the last few years that I’m stunned at the thought of losing her.

But when she walks me through her thinking, it’s magnificent. She tells me she’s applying for the executive director job, but that she’s worried that if she’s not chosen, the person who is will have to work with her as board chair, which wouldn’t be right. And besides, it’s not fair to be an insider candidate. The process should be open and pick the best person. So she’s going to resign, and give up the chance to become board chair.

I can hear in her voice that this is hard for her. Jocey joined the Loft board after some 10 years as a member, during which time she grew into a published writer with commentaries on National Public Radio. It’s been a very personal journey for her.

And I know the idea of becoming chair is personal in another way as well. A few days ago, I ran into her father, Roger Hale, at a fundraiser. He’s an imposing guy — a retired CEO, articulate, and married to the woman who taught the very first class at the Loft — the writer Nor Hall. He told me how proud he was that he and his daughter would both be board chairs of organizations at the same time.

Cut to: Four months later
The search is over. I’ve survived and am at a board party, what will be Linda Myers’ last. It’s at a beautiful home on the shores of Lake Minnetonka. The early evening sun’s ricocheting off the water. And though she’s no longer on the board, Jocey’s there, having triumphed in the competition to replace Linda. In fact, she garnered the top scores from board members, staff, Loft members and the search committee despite a national field of brilliant candidates. Her eyes are moist, hearing Linda speak of the last 13 years. “Sometimes I still can’t believe it,” she tells me afterward. “I’ve found the perfect job.”

Over by the water, the world explorer and writer Dan Buettner is chatting up my wife, Rebecca. He was one of Jocey’s strongest references. “She’s a social maven,” he wrote, “but with none of the inflated ego or superficial inclination that comes with the territory.” He’s looming in and out of the blinding light. I ask him how he sees her qualities benefiting the Loft, now that she’s got the job. He laughs. “That’s like asking how Ernest Hemingway’s writing qualities can benefit 20th century literature.”

Someone brings more wine. Dan tells me how he first met Jocey at a similar party nearly 20 years earlier. “I told her about our bicycling expeditions. She said, ‘I want to work for you.’ I said: ‘That’s lovely, but I can’t pay you.’ She came to work for me anyway but with no pay at first. Within a few weeks, we were generating enough to pay her salary, and that began nearly a decade of co-working.” That decade included putting Buettner’s adventure learning and interactive expeditions into more than 50,000 classrooms nationwide.

The sun’s setting, and it’s getting easier to see. Nancy Gaschott, the Loft’s long-serving administrative director, is standing by the canapés, which I can’t seem to get enough of. “I admire how down to earth and hard working she is,” says Nancy. I like Nancy and trust her opinions. She served as interim executive director before the Loft found the old Linda Myers — as in the prior model, not age. At 60, Linda seems at least a decade younger, and tells people it’s because of the Loft.

Nancy considers her words carefully. “Working on the strategic plan, Jocey was committed to listening to the broadest possible range of views. It was really impressive.” She smiles broadly. “And she’s experienced in so many of the areas the Loft needs: fundraising, community organizing and outreach, technology. Her energy is contagious.” 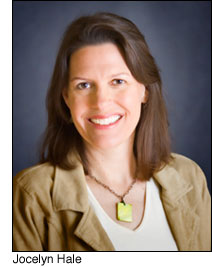 The contagion
Contagious energy, networking and thinking outside the box are themes that emerge in any conversation about Jocelyn Hale. “Every single day she challenged us to think differently and creatively, always in ways that fostered individual and collective growth,” says Stacey Hanley, who worked with Jocey for several years at Best Buy Children’s Foundation. “Her love of the Twin Cities was inspiring and contagious — under her leadership dozens of very busy Best Buy executives have shared their talents on local nonprofit boards.”

I ask Stacey how she first met Jocey. “It’s a classic Jocey story,” she says. “Before I ever met her, she completely changed my life in a casual bus-stop conversation with my sister, who told Jocey I was considering moving to Minneapolis. Within a week or so, plans were set for me to house-sit for her sister over winter. By spring, I was working at Best Buy and had bought a house of my own. Without Jocey immediately connecting the dots — and acting on it — it would have been a very different story.”

Similar themes surface when I call outgoing board chair Shirley Nelson Garner. Shirley joined the Loft board while she was still chair of the English Department at the University of Minnesota. She fell in love with the organization and stayed for seven years. “I think the most impressive thing is Jocey’s ability to think outside of the box,” she tells me. “The whole strategic planning process was guided by her wisdom, imagination, planning and good will.”

Buettner says that contagious good will comes from her approach. “She is incapable of deceit, or pettiness, or posturing and hence inspires great trust with all stakeholders. She’s a master communicator in both the written and spoken word.”

Love over money
But it wasn’t always so. Jocelyn Hale grew up dyslexic, and struggled with the written word through much of her childhood. It’s 7 a.m. We’re grabbing coffee at Java Jack’s in South Minneapolis. Jocey arrives on her bike, getting a ride in before her boys wake up. She tells me that her parents, who are both avid readers, were concerned about her “inability to stick with a book.” During the summer after fifth grade, they resorted to bribery, offering to pay her a dollar for every book she read.

We’re sitting outside, our coffee steaming in the morning air. “Back then I was making 25 cents an hour babysitting, so a dollar was a lot of money. I started with ‘The Adventures of Robin Hood’ and after a few chapters I fell madly in love with the merry men. I could not put the book down and refused my parents’ dollar for fear that money would cheapen my relationship with Robin.”

She spent the rest of the summer on the porch, reading the complete “Adventures of Sherlock Holmes.” The experience paired a love of books with a work ethic, the marriage of which has become a major theme in her life, charting her journey from dyslexic non-reader to published writer and national radio commentator, and now to the helm of America’s largest literary center.

“She has the ability to think big, and the pluckiness to pull it off — and to get other people to pay the bills,” I remember Dan Buettner saying some months back.

I wonder if Robin Hood was technically the first executive director.

The sun’s getting hot, and our coffee’s almost gone. It’s time for Jocey to head home to get Roger and Teddy out of bed. At 12 and 11, they are starting to sleep later. Her husband, Glenn Miller, who chairs the Friends of the Minneapolis Public Library board, will be heading off to work as soon as she returns, and then will cover for her in the evening when she heads to the U. She’s finishing her master’s in nonprofit administration at the Humphrey Institute, doubling up on classes to get most of her degree out of the way before taking the reins of the Loft later in the fall.

I tell her I’m happy how well all of the constituency groups responded to her, and that someday people will be talking about looking for “the next Jocelyn Hale.” She gives me one of her 2-foot smiles and tells me about how she just took a mandatory online personality test for a class she’s taking, followed by a meeting with a career counselor, who had no idea about her new job.

“She told me that I should be a writer, a journalist, a public relations manager, a fundraiser or a director of a nonprofit. I had to laugh. I guess I landed in the right spot.”

This article is reprinted from the November issue of A View From the Loft publication. Loft board treasurer Shawn Lawrence Otto of Marine on St. Croix is a screenwriter and director. His credits include the film “House of Sand and Fog,” starring Ben Kingsley and Jennifer Connelly. He is married to Minnesota’s state auditor, Rebecca Otto.