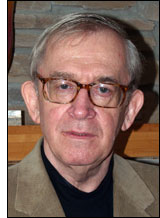 For my 10th birthday, celebrated in Buffalo, N.Y., my neighbor John Kearney gave me his old BB gun as a present. It was all oiled up and ready for action.

I would have shot at the first robin I saw had my father not intervened and lectured me on the dangers of firearms, before tossing the gun away. He had never fired as much as a cap pistol, so the caution stemmed from something other than experience. I quickly got over my disappointment.

Many years later, I moved to Minnesota, the land of numerous species of game birds.

I am friendly with two veteran hunters from Minneapolis and another from Hudson, Wis. For camaraderie and exercise, we adopted a Saturday morning ritual of walking the grounds of Minnetonka High School, which looks like the campus of Northwestern or Penn State. The taxpayers are generous in the western suburbs.

Hunters vs. nonhunters
The friendship got strained at times. During hunting season, as a nonparticipant, I was occasionally left alone to stroll the streets of downtown, where I live.

My friends insinuated that hunting was what real Minnesotans did. Therefore, I ought to accompany them on a duck hunt in Fergus Falls, a place I knew only from TV weathercasts. I wouldn’t need a gun.

I was regarded as a bystander who would soon witness hunting prowess. The tone was gentle amusement and tolerance of my inexperience. Jokes flew harmlessly, and there were laughs about friendly fire. Still, there was mild disdain that over time I had not felt the attraction of hunting.

We planned a three-day trip, from Friday, Sept. 28, to Sunday. The opener itself began on Saturday.

A tense night
Friday morning I drove with Roy, a commodities broker whom I’ve known since second grade in Buffalo, toward open country. We took Blarney, his young black Lab, whose restiveness soared when we hit the highway. We met Bill, the tool rep, and Bob, an office furniture salesman, at Motel 7, a nondescript gray building in Fergus, as we were calling it, which had a Coke machine that only took dimes.

That tense night before the hunt, we huddled in Bill’s room, talking about our prospects. Bob said he remembered when the skies were black with ducks on past openers. Roy said the state’s wetland base was going away, so we should keep our enthusiasm in check.

Bill claimed the lakes were filled with carp, which struck everyone as worrisome. He said polls showed Minnesota hunters were satisfied with a bounty of four ducks a day. That meant the likelihood of 12 ducks the next day. Blarney would be in Lab heaven.

The impassive decoys set, we eased ourselves into grassy plots Saturday morning at sunrise, waiting for ducks. I sat in a spindly tripod chair behind the firing line, mindful of the mishap that involved Vice President Cheney and his hunting companion. The elderly man took the veep’s blast nearly head-on but lived to tell about it. Curiously, he later thanked Cheney for not killing him.

We would be at water’s edge for at least five hours, so I brought along a biography of Albert Einstein. Distancing myself from the main action this way irritated Bill, who wanted me to scan the skies for birds.

Einstein and cold winds
Blarney ran in tight circles 3 feet in front of me, the equivalent of nervous pacing, and awaited a shotgun blast and a splash that would send him hurtling into the cold waters of the lake.

The hours slid by, the air turned colder, and the wind created small whitecaps that threatened to swamp the decoys. I got far enough into my book to learn that Einstein was a mediocre mathematician who liked sailing and attractive women.

Blarney stared bug-eyed at his master as if he sensed a trick but could not grasp the worth of it. Someone passed out miniature Snickers bars, but Bob said they were no substitute for lunch.

We rose as one and drove directly to the nearby Perkins, where we ordered hamburgers with fries. We then called off hunting. Surely tomorrow would bring the cries and flutter of waterfowl.

We ended up passing on that second day because of a hard rain. The toughness of hunters, the picture my friends tried to paint, shriveled at the edges. They were disappointed that the adventure had fizzled before my eyes, the gunless neophyte so willing to be impressed.

Talk of a future hunt was halted, and I thought this might be my last experience of its kind. The joke had worn thin. Amateurs need not apply.

Everyone agreed early on Sunday that it was time to quit. My friends, dauntless Minnesotans, believed there would be better times ahead. My half-contented pal, Blarney, looked at me in a puzzled way, and the five of us walked slowly toward the main desk of Motel 7 for early checkout.

Terry Thompson is a teacher and writer living in Minneapolis.