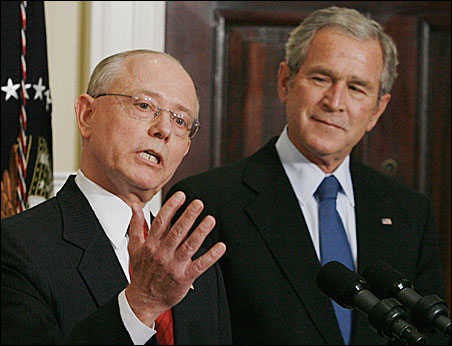 When he announced initiatives for military members, their families and veterans for the state’s 2008 legislative session, Gov. Tim Pawlenty said, “We need to say ‘thank you’ to our veterans not just with our words, but by our actions.” By nominating retired Army Lt. Gen. James Peake to be secretary of Veterans Affairs (VA), President Bush told America’s 24 million living military veterans that a mediocre leader is good enough to oversee the second-largest department of the federal government.

The Senate formally agreed Friday, confirming Peake in a parliamentary procedure known as unanimous consent, which allows approval if no Senate member objects.

What is perhaps most notable about Peake’s nomination is that it drew so little attention. President Bush announced Peake’s nomination at the end of October, when the media were focused on the confirmation hearings of Michael Mukasey to be attorney general. CSPAN chose not to telecast live Peake’s December appearance before the Senate Veterans’ Affairs Committee. The session was broadcast at 12:50 a.m. the following day.

Instead in prime time, CSPAN aired Supreme Court arguments of the detainee Boumediene v. Bush case involving the writ of habeas corpus. Other media focused on murders in Nebraska and Colorado, the Supreme Court hearing and the destruction of CIA videotapes of detainee interrogations. Senators vigorously debated amendments to the farm bill, while rushing to end the first session of the 110th Congress with more than vetoed bills.

After seven years of executive incompetence, we as a nation have grown so complacent about “crony incompetence” that not a single senator among the 15 on the Senate Veterans’ Affairs Committee felt compelled to vote against Peake’s nomination. They apparently judged Peake on future promises and not on past performance. These are the same people who show up for Veterans Day and Memorial Day ceremonies and use campaign photos with veterans in their literature.

Peake inherits an agency with lowered expectations. Recent McClatchy reporting, for example, reveals that the VA adjusted its goals to make them more “realistic,” since its backlog of veterans awaiting disability-claims review grew still larger this year. The Army remains reluctant to award disability compensation to soldiers with injuries that make them unable to maintain employment. These soldiers are often sent home with a 30 percent disability pension, which amounts to about $700 per month, and some soldiers are even discharged with no compensation.

Leadership issues
As Army surgeon general from 2000 to 2004, Peake moved combat surgical teams closer to the point of injury, resulting in survival rates of more than 90 percent, much higher than in previous military conflicts. This is probably his greatest achievement. Under his leadership, Walter Reed Army Medical Center remained unprepared for a tidal wave of casualties from military operations in Iraq and Afghanistan. His leadership shortcomings resulted in many of our wounded, injured and ill National Guard and reserve members failing to get prompt outpatient medical care and disability benefits. Some of our citizen soldiers waited months for care and assistance.

The scope of problems in Army outpatient care was revealed on the watch of Peake’s successor, Major Gen. Kevin Kiley, when the Washington Post in February published Dana Priest and Anne V. Hull’s revealing report that led to investigations by several congressional committees. The Dole-Shalala Commission on Wounded Warriors produced a report with many recommendations to be swiftly implemented by the new secretary.

“I am confident that he will build upon our record of improving care, reducing bureaucracy and ensuring that our veterans receive the benefits they deserve,” said President Bush, praising the hasty Senate confirmation.

Leadership record
Peake was part of the Army leadership that began improperly discharging record numbers of soldiers for “personality disorders” and drug abuse, following their return from combat tours in Iraq and Afghanistan, rather than providing mental health exams and treatment. These “Other Than Honorable” personality discharges prevent veterans from getting VA health care and benefits. That means mental health problems among those veterans can remain undiagnosed and untreated. Military veterans committed suicide at the rate of 120 a week in 2005, more than double the rate of adult Americans, according to data provided by 45 states. Peake also gave misleading information to Congress about Army suicides in Iraq, and on his watch, military doctors were involved in interrogation of detainees in Iraq and at Guantanamo.

“The burden is on Dr. Peake to prove to veterans around the country that he can be the honest, independent advocate we need to turn the VA around,” said Sen. Patty Murray (D-Wash), a member of the Senate Veterans’ Affairs Committee and a champion for veterans.

Conflict of interest?
Independence could be hard for Peake to achieve. He served as chief medical director and chief operating officer with QTC Management, which provides government-outsourced occupational health, injury and disability examination services through VA contracts worth millions. Following his nomination, Peake went on unpaid leave from QTC, whose board chairman is former VA Secretary Anthony Principi. In a disclosure to the Senate Veterans’ Affairs Committee, Peake indicated he would divest stock holdings in Medtronic and 56 other companies. Many of the other companies are major pharmaceutical companies that either do business with the VA or may in the future. In his written disclosures, Peake said, “If confirmed, I will terminate any connection with QTC, will have no ongoing or residual financial interest in QTC and will recuse myself in any matters related to QTC.”

Opposition and lawsuit
Veterans for Common Sense (VCS), a nonprofit organization, was a lone voice speaking against the nomination. When the Senate confirmed Peake, VCS was in a San Francisco courtroom on a class action lawsuit to require the VA to change its procedures to handle disability claims in a fair and timely manner. The government’s motion to dismiss the lawsuit claims that only Congress, not the federal courts, has jurisdiction in this case. VCS is represented by the San Francisco law firm Morrison & Foerster and Disability Rights Advocates of Berkeley, Calif., as a pro bono service to our nation’s veterans. The legal battle affects about 600,000 veterans whose disability claims are backlogged. Many have post-traumatic stress disorder and are at risk for suicide, factors that can be intensified by the long wait for treatment.

Dr. Peake is a combat-wounded veteran and Purple Heart recipient with a degree in medicine and many years of experience in the Army Medical Service Corps. It is now his responsibility to provide services for veterans with service-connected disabilities and those eligible to receive health care through the VA. The VA’s outreach mission includes increased efforts to identify veterans at risk and to lower the incidence of veteran suicide.

Through expedient Senate action, Peake is now the primary advocate for 24.5 million veterans. The reports to be issued at the end of the Bush presidency will reveal what Peake’s leadership is able to accomplish for the people we call America’s Heroes.

Nancy Gertner, of St. Louis Park, is a Navy veteran and associate chair of the DFL Veterans Caucus.