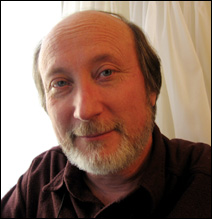 At DFL Senate forums, the crowd favorite isn’t hard to pick out. Longtime peace activist Jack Nelson-Pallmeyer routinely wows the party faithful, bringing passion, conviction and coherent values and objectives (as opposed to Al Franken, who brings passion but no internal consistency) to bear on a range of issues, from health care to the occupation of Iraq.

Of the three top candidates for the DFL endorsement to run against Norm Coleman next November, he goes the farthest in his calls for universal health care, the demobilization of American society, a forthright break with the military-congressional-industrial complex, and a long-overdue end of corporate domination of American life. Of the three top candidates, he is the one who brings activists — the people most likely to attend party caucuses early next year — to their feet, clapping and cheering. Of the three major candidates, he is the one who speaks most clearly to the hopes and frustrations of party rank-and-file.

Naturally, he is considered a distant long-shot for the Senate endorsement.

DFL’s gun-shy nature understandable but off-base this time
The DFL is understandably gun-shy about backing statewide candidates solely on the basis of their popularity within the party itself. It is also understandably leery of endorsing candidates whose weakness among the general electorate enhances the likelihood of a bruising primary challenge in which the officially endorsed candidate is dumped in favor of a better-known and funded figure. But in the case of Nelson-Pallmeyer, I think the party finds itself with a new kind of dilemma on its hands, one that it cannot solve by looking to the past for answers.

If the DFL runs Nelson-Pallmeyer against Coleman, he’ll win in a rout. If they run Mike Ciresi, it’s at best a toss-up. If the party chooses Franken — the candidate who, to date, has the best shot at winning the endorsement — Coleman wins and we get to spend another six years being represented by the political equivalent of the Scarecrow, the Tin Man and the Cowardly Lion, with a dash of Guiliani-esque family values all wrapped up in one unsavory package.

Why? Because 2008 is going to be about change. Not “experience.” Not “staying the course.” Not “full-steam ahead slow” as polling from Iowa, where Barack Obama pulling ahead of Hillary Clinton makes clear. When the country is experiencing strangulation, triangulation is not what’s called for.

In Minnesota, meanwhile, Al Franken is a Hillary Democrat: a “centrist” whose positions on Iraq and Iran reflect a political center-of-gravity that appears to exist nowhere but in the think-tank ether inside the D.C. Beltway and on Sunday-morning talking-head shows. The electorate already has buyers’ remorse over Amy Klobuchar. It’s not in the mood to send her clone to the Senate next year.

No. When it comes to the general election, the Democrat with the best shot of knocking off Norm Coleman is Nelson-Pallmeyer a.) because he offers the clearest contrast to Coleman and b.) he is able to articulate clearly, passionately and with no hesitation positions Minnesotans are desperate to hear.

Progressive DFL officeholders face paradox
As a result of this paradox, leading progressive DFL officeholders are torn. Though actively courted by the Franken and Ciresi campaigns, their hearts belong with Jack Nelson-Pallmeyer who, for whatever reason — lack of resources, a principled refusal to indulge in politics-as-usual — has not been as active in garnering their support. Now it’s not unusual for party activists to feel that their hearts belong to one candidate but their heads belong to another, with “electability” usually trumping “idealism.”

In the case of Jack Nelson-Pallmeyer, however, no such split between heart and head is necessary. If DFLers can shake off conventional wisdom and take a really clear-eyed look at today’s political realities, they will see that, this time around, Nelson-Pallmeyer is that rare electoral commodity, an underdog who is, in reality, the top dog — an outsider with the best chance of landing a Democrat in Coleman’s Senate seat.

This piece is reprinted from Twin Cities Daily Planet. Rich Broderick is a co-founder of the site, where his blog, “Ground Zero,” appears on a regular basis.