On Labor Day I was at home cooking supper with a graduate student from China when we heard on the radio about riots in downtown St. Paul. We looked at each other in shock. We had just returned from downtown, where I had proudly shown my visiting student America’s best example of democracy: Americans of different races and beliefs peacefully protesting government policies. It was a message I had tried to communicate to my students when I’d taught in China, and I had utterly failed. They had flatly disbelieved me.

I now was hosting a student from China who was eager to see the events surrounding the Republican National Convention. I had worried when we arrived in Rice Park at 1 p.m. about getting caught up in violence, but there was no hint of it. My student excitedly took photos of the MSNBC broadcast stage outside Landmark Center.

“All these people out here,” she observed. “In China, when leaders meet; no one can come.” She then wondered if she could take photos of the many police and security people.

I’ve lived in China and I understand taking photos can get you into trouble. I also saw that our own police and security people looked tense. I stepped forward, hands open in the universal show of no weapon, and asked an officer if my student from China could take his photo. He was pleased, but he wanted to know if he should smile or look tough.

“Smile,” I said. “You’re representing America.” He seemed perplexed for a moment, and then he beamed.

A gasp at signs for Falun Gong
We strolled around Rice Park until my student gasped at the sight of a couple of women with signs supporting Falun Gong. When I stopped to take their literature, one woman explained about the persecution of the followers of Falun Gong in China. When she realized my student was Chinese, she made it very clear she was not against the Chinese people, but against the Chinese regime. My student listened with a furrowed brow and took the literature.

Around the corner, we were offered free hats and a disc with a photo of Michael Moore looking happy on the cover. “What’s it about?” I asked. The two young men explained it was a very funny movie that gave an alternative to the liberal bias of the media. I told them I didn’t agree there was a liberal bias and explained why. They listened closely and looked a bit shaken. I assured them I would watch the movie and said we must always keep talking to each other – always. They happily agreed. When we were out of earshot, my student examined the disc, frowned and asked if it was legal. I assured her it was.

I knew a peace march was scheduled but saw no sign of it, so I consulted a park ranger. “Be careful if you go in that direction,” he admonished.  In fact, I was quite worried about getting caught in a crowd. When panic sets in, people get foolish. However, I can’t imagine a better way to learn about democracy than watching American protesters. It didn’t take long to find the mass of peace marchers.

My student was thrilled.  No wonder, because it was real America, a beautiful nation of disagreement. 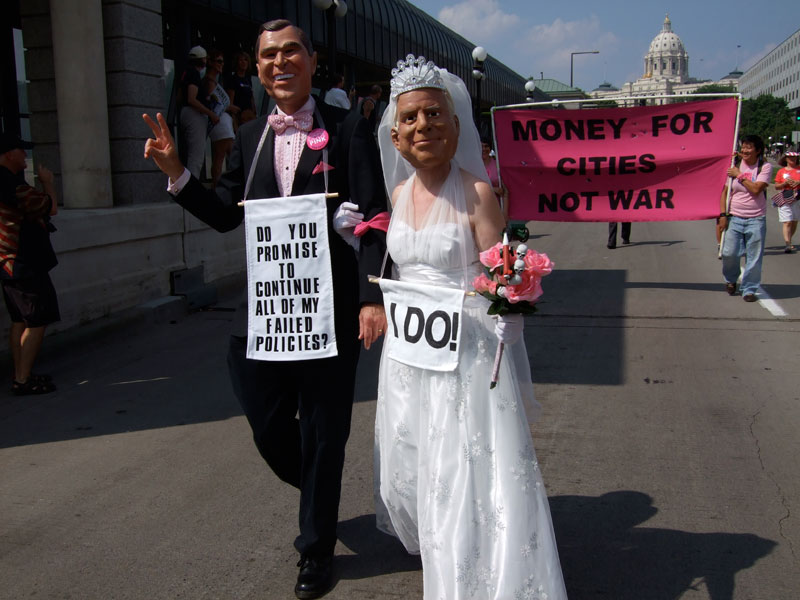 Amazing array of issues
Some of the marchers were marching against the Iraqi war; others carried a huge inflated world to represent environmental issues. There were Oromos demanding Ethiopia get out of their country, Code Pink demanding America get out of Iraq. Somalis carried a sign I couldn’t read; a group of Hmong people marched for immigrant rights. Along came George W. Bush dressed as a groom holding the hand of John McCain dressed as his bride. My student was amazed.

Out came her camera and we stepped into the march to get a good photo. We returned to the curb. Above us was one helicopter. “Security?” she asked. “Yup,” I replied. She was impressed. “If this was China, there would be 20 helicopters above.”

Then we watched Israelis with a cause written in Hebrew; a few Jews for Jesus; people representing President Bush, Vice President Cheney, former Defense Secretary Donald Rumsfeld and Secretary of State Condoleezza Rice wearing prisoner stripes and chained together; and angry-looking people carrying black banners written in another language. I had to jump into the march again to ask them what they were saying; it was a list of names of allied Iraqis who had died in Iraq.

Police looked tense
No one was getting unruly, but I saw the police were tense and had lined up shoulder to shoulder blocking cross roads. I thought it was an extraordinary number of police, but my student disagreed. “There would be many more in China.”

We walked miles in downtown St. Paul on Labor Day. We saw some 10,000 people in the march and walls of police – and all were peaceful.  I only saw one man and woman, dressed in very good clothes, arguing with the police. The man and woman had badges on lanyards around their necks. They were trying to cross the police line, but the police would not allow them, despite their angry admonishments to allow them to get back to the convention. That was the first time that day that I thanked the police for their work.

“It’s hard work,” I said, “Thanks for doing it.” Their faces softened; they nodded, appreciative. I quickly took my student to the other side of the street; I was worried there would be trouble.

A long walk home
We had to take a long, circuitous route back to my car, as the police would not allow us to walk back to the Rice Park area. We didn’t mind. My student was thrilled with her photos; she plans to send them to her friends in China. Along the way, I often thanked the police. I saw men and women doing a hard job, standing tensely with heavy gear fastened to their uniforms on a hot day. They had to be ready to take action but do nothing for hours. It’s a strain on a human being.

During the three years I taught in China I longed for dissent; I hungered for the cacophony of American voices in disagreement. Free speech is the crux of democracy, and to live in a democracy, to practice free speech, you have to be strong. It takes strength to calmly listen to people saying absolutely revolting stuff. I tried to explain that we do this in America to my students in China, but they never understood. How could they? What they had seen on China Central TV was footage of American police in riot gear tear-gassing and clubbing American citizens.

Reva Rasmussen is a nurse and writer in the Twin Cities. She blogs about China at blog.revarasmussen.com.