On Dec. 3, a young Afghan by the name of Soraj Ghulam Habib played a central role in persuading President Karzai of Afghanistan to switch his position and sign the Convention on Cluster Munitions, a treaty that bans the production, use, export and stockpiling of cluster bombs. According to Titus Peachey, a close colleague of mine who was in Oslo for the signing, Soraj tipped the balance:

“The scoop here is that Soraj was really sad about Afghanistan not signing … so went to the Afghan ambassador, who apparently used to be on Karzai’s staff. He took him by the hand with his own injured hand and said Afghanistan has to sign this treaty. The ambassador was so moved he called Karzai, who gave the go ahead. Soraj was elated.”

What the media reports fail to mention is the Minnesota connection to Soraj’s life and near death. In 2001, then 10-year-old Soraj was at a picnic in a park near his home in Afghanistan. He thought the bomblet he found contained food and tried to open it. The resulting explosion killed his cousin, injured three others, and took both of Soraj’s legs. Soraj’s father stopped doctors from euthanizing Soraj at the hospital.

Soraj claims the munition that killed his cousin and nearly killed him was a BLU-97 bomblet (BLU stands for “Bomb Live Unit”). According to Jane’s Air Launched Weapons, the combined effects munition (of which the BLU-97 bomblet is the key component) “was originally developed by Honeywell Defense and Marine Systems (later part of Alliant Techsystems) to provide the USAF with a multipurpose cluster bomb for the ground-support role.” The weapon system was produced by two primary contractors –Alliant Techsystems, based in Minnesota; and Aerojet and its successors, based in California.

Another victim, a de-miner in Serbia
I’ve had the honor over the past few years of getting to know Soraj and others victimized by U.S.-made cluster munitions — like Branislav Kapetanovic, now a quadriplegic, who did his military service in Serbia as a de-miner. By the late 2000, he had cleared thousands of cluster bomblets.  His luck ran out in November of 2000, when another BLU-97 exploded as he approached it. On Wednesday of last week, Branislav said, “It is a mere coincidence that tomorrow is my birthday and I think that I’m the happiest person in the world. I will get the best present ever — the official signing of the treaty!” 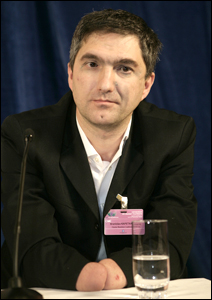 Another friend is Lyn Bradach, whose son, U.S. Marine Cpl. Travis Bradach, was killed in 2003 in Iraq. A colleague with whom he was clearing unexploded cluster munitions violated clearance protocols by stacking them in piles to detonate them rather than destroying them where they lay.  According to accounts related to Lyn by her son’s buddies, the man heard a click as he moved a bomblet, uttered an expletive, and then the bomb went off. That man lost his eye, hand and leg, not to mention his comrade, Travis.

A month ago I watched Lyn in Geneva, where she urged U.S. negotiators to make meaningful progress on stopping the use of cluster munitions.  Later she showed me pictures of Travis that were in his belongings and shared with me the pain of losing a son, on whom so much hope had been placed.

Picking up on a campaign theme
As I watched portions of the signing ceremony online and read reports from Oslo, I am struck that several government officials picked up on a theme from the U.S. election: “yes we can.”  The Norwegian deputy foreign minister started the wave of “yes we can” references.

French Foreign Minister Bernard Kouchner picked up the theme, saying, “Yes, we can! We can, and the U.S. can sign this treaty, Russia can, and China can.” He stated that he will urge U.S. President-elect Obama to sign.  France, the UK, and the majority of NATO states signed the treaty, demonstrating that users and stockpilers can and do support the banning of these weapons.

The United States should join the treaty. The Bush administration exerted considerable diplomatic efforts to throw roadblocks in its way. The Department of Defense under Secretary Robert Gates felt compelled to modify its policies last summer as the majority of the world’s countries moved toward a ban, but the department has not gone far enough. The United States finds itself in the odd position of acknowledging that the vast majority of its huge stockpile of cluster munitions has unacceptably high dud rates, while at the same time defending the right to use and transfer these weapons for the next decade.

U.S. should reverse course in early 2009
The United States can and should do better. In February of next year, the new administration should immediately reverse U.S. opposition to the cluster-bomb-ban treaty and move toward signature and ratification.

On Dec. 4, Soraj closed the Oslo conference with the following words:

“Today I am 17 years old. I do not want to wait years until I am an old man to receive assistance in my community or to be able to get a job. People who are injured by cluster bombs should be able to receive emergency assistance and not be left to die in a hospital like I was until my father saved me. …  Thank you for signing the convention to prevent the loss of more innocent lives and to give us our rights.”

Virgil Wiebe is an associate professor of law at the University of St. Thomas.