With property tax payments due this week, Minnesotans are painfully aware that property taxes — including city property taxes — have increased tremendously during the era of “no new taxes,” which officially began with the ascension of Gov. Tim Pawlenty and his conservative allies in 2003. What may come as a surprise is the fact that despite property tax increases, real per capita city, county, and school district revenue has fallen.

This analysis is based on data from the most recent “Price of Government” report prepared by Minnesota Management & Budget and will extend from the last year under a budget set during the Ventura administration (CY 2002/FY 2003) through the last year of the current biennium (CY 2010/FY 2011).  (“Price of Government” data after FY 2007 are not final.)  All amounts in this analysis will be expressed in constant current-year dollars.

This article will address cities. [Three other articles in a four-part series will deal with counties, school districts and local governments collectively. Those articles are being published on Minnesota 2020’s website this week and Monday, Oct. 19]. 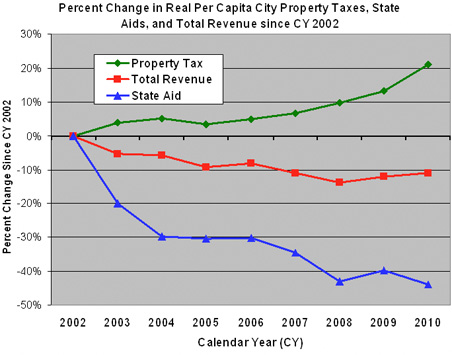 Of course, cities receive funds from sources other than state money and property taxes.  Among the other sources of city revenue included in the “Price of Government” report are charges for licenses, fees, special assessments, enterprise revenues, and federal dollars. However, collectively these revenue sources have also declined since 2002.  Consequently, none of the $70 per capita decline in revenue from property taxes and state money was recouped through a net increase in other revenues.

The situation with cities illustrates the practical impact of the so-called “no new tax” policies pursued at the state level. The State of Minnesota has experienced a decline in real per capita revenue since 2002.  The state has been unable to balance its budget through cuts in state spending or through fee increases alone and, with few exceptions, state tax increases have been off the table.  Consequently, the state has balanced its budget by shifting a disproportionate share of the problem on to cities and other local governments.

In the face of a massive loss of state aid, cities have had two options: increase property taxes and cut budgets. They have done both. In fact, cities have cut their budgets far more than the state government has done since 2002.

This is the legacy of the “no new tax” agenda in Minnesota. The state’s budget problems are shifted to cities, thereby compelling city officials to do what state leaders do not have the fortitude to do: increase taxes. At the same time, the state’s chief executive complains about growth in city spending — even though Minnesota cities have been more frugal than state government.

Jeff Van Wychen is a fellow at Minnesota 2020, a progressive, nonpartisan think tank based in St. Paul. This and other articles in his series can be seen on its website.

City property taxes rise in the ‘no new taxes’ era