Wednesday’s announcement of TIGER grants from the U.S. Department of Transportation, including funding for the St. Paul Union Depot, confirms that it’s a new day for transportation, at least at the federal level. The implications for Minnesota are profound.

Funding for Union Depot marks a significant step forward in developing an integrated system that connects people from all parts of our metropolitan area, east and west. Union Depot will be a vital transportation hub — for the Central Corridor Light Rail line, the Red Rock commuter rail from Hastings, the Rush Line rail/bus rapid transit line from Forest Lake, an extension of the Northstar commuter rail to St. Paul, local and intercity bus service, and high speed rail connections to Chicago.

Along with the Minneapolis Transportation Interchange Facility and the lines that it will serve near the new Target Field, these investments position the metro region and the state to move people and freight in a way that makes places stronger, cleaner and safer.

Ultimately, these investments are about creating livable communities and allowing people to have a choice in getting to and from their destinations. As families adapt to these economic times, an integrated transit system with strong connections to walking and bicycling networks will enable families to consider downsizing their household’s number of cars. In doing so, families can save up to $10,000 annually per vehicle to invest in their children’s education, health care and home ownership.

A welcome shift
On a larger scale, the TIGER investments show a welcome shift in federal policies. For the first time in federal transportation funding decisions, all TIGER proposals — whether road or rail, bus or bike — competed on the same criteria. The criteria include livability, safety, environmental protection, and economic development in addition to cost-effectiveness, whatever the community — urban, suburban, or rural. I applaud this change and look forward to all federal and state projects competing on a level playing field. 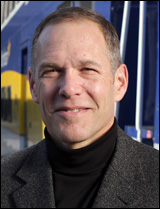 Of the funds awarded, 77 percent went to investments in transit, bike/walking networks, and freight-related investments for ports and rail. This funding pattern is good for jobs. A recent analysis of stimulus spending from the Center for Neighborhood Technology, Smart Growth America and U.S. PIRG showed that investments in public transportation created twice as many jobs per dollar as investments in highways. With the 2009 stimulus, highways received three times more money than transit. It’s good to see the TIGER funding reverse that ratio to create more jobs.

TLC, which administers Bike Walk Twin Cities, one of four federal Non-Motorized Transportation Pilot Programs, also was pleased to see funding for similar efforts in Indianapolis and Philadelphia as well as for a Complete Streets project in Dubuque, Iowa.

Poised to be strong partner
It’s clear that our federal government is poised to be a strong partner in advancing livability, transportation choices, and sustainable communities. Now it is incumbent on the Minnesota Department of Transportation, the Metropolitan Council and the Counties Transit Improvement Board, with their local and non-profit partners including TLC, to move forward with plans for an integrated multi-modal transportation network.

We can make significant progress this legislative session by approving the $55 million in the House bonding bill for transit capital projects and by passing the Complete Streets legislation. At the same time, we must move boldly forward with planning our transit corridors, implementing an extensive bike and walk network, and creating more livable communities through thoughtful, transit-supportive developments that expand both housing and transportation choices.

By successfully implementing transit, biking and walking networks, we will ensure that our metropolitan area is a healthy, vibrant and highly desirable place to live, raise a family, pursue a career and enjoy Minnesota’s wonderful artistic and natural treasures.

Dan Hoxworth is the executive director of Transit for Livable Communities.