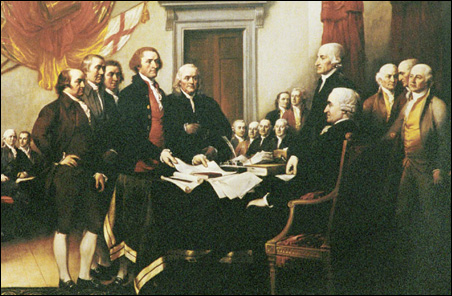 Source: Library of Congress, Prints and Photographs Division, Theodor Horydczak Collection
A detail from John Trumbull’s painting of the Founding Fathers signing the Declaration of Independence.

Every Fourth of July, thousands of Americans stand in long lines to see the Declaration of Independence. They’re curious to read for themselves the powerful words that have been repeated again and again in books, newspapers, magazines and on the Internet. They strain to make out the phrase “all men are created equal, that they are endowed by their Creator with certain unalienable Rights, that among these are Life, Liberty and the pursuit of Happiness.”

In spite of the heat of a Washington summer — and the faded lettering on the document — these visitors to the National Archives Building squint to check the accuracy of that quote. For them, the Declaration is a charter of American freedom and it’s too important to be misquoted. Would that the rest of us were as determined about checking other quotations as these tourists are in reading the Declaration of Independence.

Why is this important? Well, frankly, we’ve gotten lazy about our interpretation of the past. We too often rely on questionable Internet sites or biased cable-TV talk shows for news and information; we too often digest what we read and hear as factual when it’s more accurately opinion or, perhaps, pure fabrication. Compounding our gullibility is the tendency for Internet pundits and political leaders to misquote or take quotes out of context to bolster a particular point of view. In short, “documentary information” is too often twisted to justify partisan perspectives.

Let me give you an example of one of those spurious patriotic quotes. Most of us are familiar with John Hancock’s bold signature on the Declaration of Independence. In fact, that signature is the logo of the insurance company that bears his name.

Legend has it …
But why did he sign his name so large? Legend says that Hancock approached the table, signed the great document in the presence of all the assembled delegates, and said: “There, I guess King George will be able to read that!”

That quote gets used repeatedly — particularly on the Fourth of July.

It’s a patriotic sentiment, but a false story and quote. It’s true that Hancock was the first to sign the document because he was president of the Continental Congress. There wasn’t any ceremony, however, just Hancock and the congressional secretary in a room by themselves, and neither man left a record of anything being said at that time.

Here’s another example, one closer to home. Just about every week the Hoover Library receives an inquiry about the famous campaign promise of “a chicken in every pot and a car in every garage.” The callers are absolutely sure that Herbert Hoover made that promise and they ask for the date and the exact words.

We have to tell them that they’re mistaken. Hoover never said it. The phrase did appear in a 1928 newspaper advertisement, but it wasn’t tied to Hoover or his presidential campaign. By the way, Hoover never said that “prosperity is just around the corner” either, but that’s another story.

There are good ways of checking stories and quotations. Just as the Internet is the source of a lot of misinformation, it also offers the tools to find the truth. Most well-known stories and quotes can be checked using the search box on Google.com or any number of other sites such as Snopes or WikiQuote. What’s most important is to check:

• What did they say?

“The Written Word Endures” is the motto of the National Archives and Records Administration, the Federal agency responsible for preserving the Declaration of Independence. It’s a motto with a powerful message: that recorded information — on paper, disks, photographs, tape, and film among other formats, ensures the accurate understanding of our past. On this Fourth of July, the day we cherish our freedoms, it’s important for all of us to use our thinking skills to check the accuracy of what we read and hear.

You can quote me on that.

Timothy Walch has been the director of the Herbert Hoover Presidential Library in West Branch, Iowa, since 1993. He can be reached at timothy.walch[at]nara.gov. This article originally appeared in the Iowa City Press-Citizen and is reprinted with permission.

The Declaration of Independence (and other historic words): too important to be misquoted