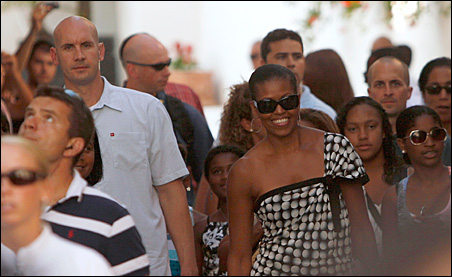 REUTERS/Jon Nazca
Michelle Obama walks to the historic center of the southern Spanish town of Marbella on Wednesday.

So, a lot of people are upset about Michelle Obama’s summer vacation to some of the more posh parts of Spain, complete with dozens of taxpayer-paid Secret Service agents in tow.

It’s way too easy for folks to outright condemn Mrs. Obama’s trip.  Although, having met a few Secret Service agents during the time I lived in Washington, I can say they should not be expected to stay lean and mean and ready to take a bullet by eating off of the dollar menu.  Even one that might include some tasty tapas.

As is the case with so much in life, there is a lot of gray going on with regard to this vacation and the lifestyles of presidential spouses.

Part of the problem involves the still quite undefined role of a first lady. We all think we know what a president should do, but we still don’t have anywhere near agreement (much less a formal job description, or even a less awkward title) as to what we really want a modern-day president’s spouse to do.

Hillary Clinton was a Yale-educated lawyer, wore business suits, tried to engineer health care reform and was basically told to go back to organizing state dinners and focusing on “soft” issues, like the health and welfare of children.

Jacqueline Kennedy, no stranger to luxury, refurbished the White House and took a great many glamorous vacations. Although the U.S. economy of the early 1960s was generally robust, Mrs. Kennedy was criticized by some for her jet-set ways that were far too haute European. Many wonder if she ever would have married Aristotle Onassis had she not gone on a Mediterranean cruise with him just months before President Kennedy’s assassination and her own near-beatification by the American people.

Then there was Eleanor Roosevelt. Buck-toothed, seemingly unknowing and uncaring of fashionable clothing or hairstyles, and possessing one of the archest voices known to the post-Revolutionary War United States, Mrs. Roosevelt also was in the White House during a time of tremendous economic distress.

Unlike Mrs. Obama, Mrs. Roosevelt lived in an era when very few women were allowed to have a career (save teaching and nursing). There were a great many who could not abide the fact that she would act as her husband’s legs while traveling about the country, wearing a sort of khaki adult Girl Guide outfit, eating lunch with forestry workers and miners, and serving hot dogs to the British king and queen.

Nevertheless, she gradually gained the respect of most Americans for her unconventional ways and her genuine concern for people suffering through the Great Depression. Still, many of her successors said they never wanted to become another Eleanor Roosevelt.

I don’t think anyone who knows much about Washington and the gilded but intense pressures of life in the White House begrudges any president and his spouse some time away. And I don’t think most expect them to drive in a minivan to a Super 8 or pitch a tent at a campground (though I can imagine the publicity value of photos of a president and first lady making s’mores with everyday American campers). For one thing, the Secret Service might go nuts over the security nightmares such spaces and roaring bonfires could present.

The Obamas, like most of their White House predecessors, can easily afford to pay for luxurious travel. The president and the first lady only reached millionaire status within the past few years, and I guess I cannot blame them for wanting to spend some of their newly earned money, escape the lunatic asylum-nature of so much of official Washington and sample some of life’s richer delights. As worthy as the cause of fighting childhood obesity is, I imagine Mrs. Obama just wanted to get away from work for a bit and have a nice vacation with her daughter.

The trouble is that Mrs. Obama is no longer an ordinary affluent American. She’s the first lady, and many millions of her fellow citizens are miserable from the effects of the worst economic downturn since Mrs. Roosevelt was in the White House. She’s also a highly intelligent attorney who was part of a campaign that mastered the meaning of optics and symbolism in electing Barack Obama president against what some would have considered insurmountable odds only a few years ago. Yes, she ought to know better. A lot better.

When I think of the optics of Mrs. Obama’s Spanish trip, I’m reminded of a saying I used to like, something to the effect of it not being illegal to wear a purple checked skirt with an orange striped shirt, but it surely does not look good on almost anyone.

And what about the president and Mrs. Obama making s’mores at a campground?