The following is a slightly condensed text of Sen. Al Franken’s remarks at the Mental Health Education Project’s 10th anniversary dinner, held Saturday in Bloomington. The project is a collaboration of Jewish Family and Children’s Service of Minneapolis and Jewish Family Service of St. Paul.

Franni and I want to thank all of you for all you do to improve the lives of Minnesotans with substance abuse and mental health issues and the lives of their families.

The Mental Health Education Project has been building bridges in our communities for ten years, strengthening mental health and substance abuse services in our state. And the Barbara Schneider Foundation, under Mark [Anderson]’s leadership, has been a pioneer in educating law enforcement about mental health so they can respond appropriately and avoid tragedies like Barbara’s death. The work you do saves lives. You are the real champions here, and I’m proud to be a strong voice for you in Washington.

So, I cannot tell you how much this honor means to me and Franni. I’m not sure I deserve it. I know Franni does.

There’s a story I’ve told before about the last time I saw Paul [Wellstone]. It was October of 2002 in St. Paul.

Franni and I were living in New York at the time. I had come to town as I often did to visit my mom, who was in a nursing home in St. Louis Park — and to campaign for Paul.

My mom had dementia. And some days were worse than others. And that day had been a particularly bad day.

Now in the evening, I drove to St. Paul to do an event with Paul and Sheila at the University Club. And when I got to there, the first thing Paul said to me was, “How’s your mom?”  Now, he was in the fight of his political life. Paul had just voted against going to war in Iraq and the entire campaign had been pretty nasty and was getting nastier. But the first thing Paul said to me is “How’s your mom?” 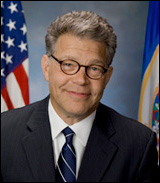 And I told him, “Well, not so good today. In fact, I couldn’t even have a conversation with her.”

And Paul said to me, “Well, you know touch means so much.”

And the next day when I went back to the nursing home, it was a beautiful fall day, not unlike so many of the beautiful days we’ve had this fall, and I took my mom in her wheelchair out to the garden. And she was having another bad day. So, I just sat next to her in the garden and put my arm around her and hugged her in the sunlight. And I really don’t know if it meant much to her. But it meant a whole lot to me.

And that was Paul. “Touch means so much.”

Paul had in spades what we Jews call Rachmones. It means compassion, empathy. It’s a concept central to Judaism. Not every Jew has it. Plenty of gentiles do. But it is central to our faith in no small part because of our history as a people.

Pete Domenici came to the issue because his daughter has mental illness. He, too, knows the suffering it can cause.

So Paul and Senator Domenici teamed up and tackled inequities in the way mental health is treated in the health insurance business. In 1992, Paul and Senator Domenici introduced the Mental Health Parity Act, which became law in 1996. But it wasn’t the real victory they wanted because the final version of the bill allowed employers to shift the cost to employees by raising copayments and deductible in insurance policies.

So, they kept at it and teamed together again to broaden the scope of the bill. And as you know, the broader legislation was passed in 2008 in Paul’s honor and renamed the Paul Wellstone and Pete Domenici Mental Health Parity and Addiction Equity Act of 2008.

While the Wellstone-Domenici Mental Health Parity and Addiction Act requires equal coverage of mental health and substance abuse benefits if your insurance includes these services, the health-care reform law provides full parity by requiring that all health plans include these services.

Now, this past year and a half as we were writing and eventually passing the health-care reform bill, I felt that part of my job as a member of the Health, Education, Labor and Pension Committee was to make sure that the HHS Secretary was paying proper attention in the crafting of the rules and regulation in regard to mental health and addiction.

And in the coming years, I look forward to working with you in making sure that the implementation of these provisions and rules continues on the right path.

Also, on the HELP committee I’m preparing for the reauthorization of the Substance Abuse and Mental Health Services Administration, also known as SAMHSA. That reauthorization will go through our committee next year.

SAMHSA programs demonstrate that behavioral health services improve health status and reduce health care and other costs to our society. If my new colleagues in Congress want to look at bringing down long-term deficits, I suggest they look at mental health and addiction treatment.

I also sit on the Judiciary Committee, and we held an important hearing on the high percentage of prisoners who are incarcerated in our society who have mental-health issues.

And, of course, we imprison millions of people essentially for being addicted to drugs. We have more people in our prisons than any other country in the world. And I believe that it is not only the right thing to do morally to substitute treatment for prison in so many cases, it’s the right thing fiscally for society. If my new colleagues want to bring down our long term deficits, I suggest they look at mental health and addiction treatment.

In many ways, I am a fiscal conservative. But to me that doesn’t mean taking a meat axe to the budget. It means investing in those things that will increase prosperity and bring down costs to our society. That’s why I’m a big believer in early childhood education. Because it has a great return on investment.

I’m proud of that bill. And it is my belief that the results of that study will show that service dogs will improve a lot of lives and save our society a lot of money.

I am working on a number of other things as well. The issue of preventing bullying in our schools. As we have seen in the recent tragic suicides, bullying is directly linked to mental health, and research shows that LGBT students are three times as likely as non-LGBT students to feel unsafe at school. The bullying and harassment they face contribute to their high rates of absenteeism and academic underachievement and even higher rates of suicide, as we’ve seen recently in Anoka.

To help address this problem, I introduced the Student Non-Discrimination Act, which would provide LGBT youth with the same rights that are extended to students based on race, religion, country of national origin, and language.

And finally, let me say something about Franni. Franni has picked up in many ways on the work of Sheila Wellstone. She has become very involved in domestic violence, an issue on which Sheila was a pioneer and a champion.

Many of you know, too, that Franni is a recovering alcoholic. I think if you asked Franni a few years ago if she would want pretty much everyone in Minnesota to know that she was in recovery, she would have said no. But during the campaign things got a little vicious and Franni felt that Minnesotans weren’t getting an accurate picture of who her husband was.

So, she insisted on telling her story in an ad. And it was a beautiful ad. I cried when I saw it. She taped the ad just talking to the producer off camera. And at one point, in talking about her alcoholism, Franni said something that I think spoke volumes and really hit home. She asked, “How can a mother of two beautiful, healthy children be an alcoholic?”

Esme Murphy the WCCO reporter, wrote on her blog that that line was so honest, so spoke to the shame that alcoholics feel, that it could very well reach people who were in that situation. Esme wrote that this was probably the first political ad that would actually help people. And it did. Franni tells me all the time that women come up and thank her for that.

What Franni did for me was an act of love. It was an act of courage. She never wanted people to know about this. And now there’s a new book out about the 2008 recount, written by Jay Weiner of MinnPost, called “This Is Not Florida.” In the index under Franken, Franni, the first entry is “alcoholic.”  We laughed when we saw it. Or at least I did. Did you laugh, honey?  Sort of?

So, thanks. Thanks most to Franni. But to all of you. Keep doing what you do.