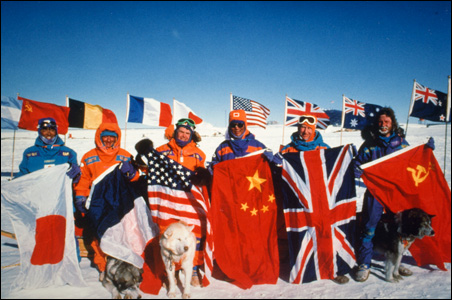 Photo by Per Breiehagen
The 1990 International Trans-Antarctica Expedition team will celebrate the 20th anniversary of their trek Friday-Saturday in the Twin Cities.

On July 26,1989, I saw Antarctica for the first time. Out of the foggy window of a Twin Otter charter that carried my six expedition team members and 40 dogs, I caught my first sight. To the distant south I could see the ice-capped mountains of the Antarctic Peninsula rise up out of the ocean, but the massive continent seemed out of place. I expected to see the Antarctic continent surrounded by sea ice. The ocean, rather than being a sea of ice, was wide open. Below was blue wavy water void of even the smallest iceberg.

We approached the peninsula from the west, from the Bellingshausen Sea, and then made crossing over the sheer-faced mountains that make up the narrow backbone of the peninsula. At 9,000 feet we topped the final mountain range and in the distance I saw a blue metallic color between the high mountain peaks. To my surprise, the Weddell Sea was also open!  Just 75 years earlier, the dense pack ice of this sea was strong enough to crush Ernest Shackleton’s ship, the Endurance. The area I could see was a mixture of tabular icebergs and open water.

When I researched our route across the Larsen Ice shelf the scientists had told me about the unusually warm summers on the peninsula and that they thought this might be the first signs of climate change. I had studied climate all of my life and I was well read on the topic. Climate change, an issue with severe implications for our planet and dangerous impacts for our way of life, was something scientists thought was going to happen generations away, but was an instant reality when I got my first glimpse of the continent and the Weddell Sea.

Looking across the Weddell Sea from the plane, I was struck by the Larsen ice shelf’s massive size. I had never seen anything of such large proportion. Icebergs that broke off looked like the size of actual glaciers and the ice walls stood a hundred feet above the water. Looking down onto the seemingly infinite ice of the Larsen, I recorded the following in a small cassette player.

“July 26th 1989: It’s Antarctica that we are looking at that is going to be the main player in the destiny of the human race. It’s this snow and ice here. If the atmosphere warms up, this ice right in this area is going to break off into the ocean.”

Seeming permanence
At the time however, it didn’t seem possible that an ice mass this large could actually break up. It seemed that the Larsen was as permanent as the Antarctic continent itself. But in March 2002, I was thumbing through the Star Tribune and on page nine in bold print were the words “Larsen B Ice Shelf Disintegrates.”  It seemed at first this was science fiction, and it took days before I could grasp the extent of this global environmental catastrophe.

There is no way to comprehend the massiveness of the disintegration of the Larsen ice shelf unless you ski and walk every step of the way. It took us 31 days, from July 27 to Aug. 26, to cross the full length of this ice shelf. While crossing the Larsen, the ice shelf felt very stable to us. Scientists at Queen’s University estimate the shelf could have been stable for as long as 12,000 years. Over the course of three days in 2002, however, a chunk of ice the size of Rhode Island broke free from the Larsen B ice shelf. Larsen A had already disintegrated in 1998. The speed of the collapse surprised even the scientists who were monitoring the shelf. Scientists link the collapse with climate change.

After we crossed the Larsen, we gained altitude and for the next six months and 3,400 miles we experienced the coldest conditions imaginable on the planet. It was only through teamwork and the combined efforts of strength and spirit that we survived. On March 3, 1990, we finished our expedition at the Mirny Russian base on the eastern side of the continent. While the expedition was complete, our hard work was not over. I spent the next year working with world leaders and in Washington, D.C,. on the preservation of Antarctica from mineral exploration. Finally, on Oct. 4, 1991, the minerals clause of the Antarctic Treaty was officially signed into law, which prohibited any activity relating to mineral resources.

My efforts to protect the Polar Regions had only just begun as the 1990s saw global temperatures drastically rise. While I have been focusing my energy on climate change, policy and education through the Will Steger Foundation, my team members have continued their personal commitments to scientific research, education and exploration. As the team gathers for the first time in the Twin Cities this week, 20 years later, we will take stock of all that we accomplished and what has changed in each of us and on the continent we became intimately familiar with. We modeled true international cooperation, endured minus 120 degree wind chills and deep crevasses to demonstrate to the world that Antarctica was worth protecting. The statement we shared with the global community when we reached the end of the expedition is still relevant today:

“The 1990s will be a decade of global change, demanding a new way of thinking and renewed commitment to action. This generation must reverse the tide of destruction and strive to preserve the future. As we learned anew in crossing Antarctica, the only limit to achievement is the limit you place on your dreams. As you seek your own way in the world, look beyond personal gain to your responsibility as stewards of the Earth. Let your vision be guided by hope, your path be adventurous, and the power of your thought be directed toward the betterment of tomorrow.”

Will Steger is best known for his polar explorations. He has traveled tens of thousands of miles by kayak and dogsled for more than 45 years, leading teams on some of the most significant polar expeditions in history, earning him the Lifetime Achievement award from National Geographic Adventure Magazine in 2007. Steger has been working with people around the world to take action on climate-change solutions through the Will Steger Foundation.

On Friday and Saturday (Dec. 10 and 11) in the Twin Cities, the public can join the six team members of the 1990 International Trans-Antarctica Expedition to celebrate the anniversary of their landmark seven-month dogsled expedition. For more information about the public events, go here.