Efforts to bust collective bargaining rights in Madison are not about the money. Money and budget deficits are the pretext for a larger battle to attack government and break public-sector unions for political reasons.

In many ways, this is the logical continuation of the union-busting battle that began under the Reagan era. What is really going on here is an effort by corporations and the GOP to dismantle one of the few remaining institutions in America that defy their power. It is the battle to restructure labor markets to serve a broader corporate neo-liberal agenda.

Through the early part of the 20th-century unions lacked the legal authority to engage in collective bargaining and strike. Strikes to improve wages and labor conditions were considered restraint of trade or illegal combinations that were fought both by the law and by brute force. The Pinkertons were originally a police force used to break up strikes, and the origins of municipal police departments can be traced to efforts to control unions. Debates surrounding the Sherman Anti-Trust Act often included discussion over whether unions were trusts that should be prevented.

But through the early 20th century workers continued to strike and organize. They organized to earn better wages for their families. They organized to improve deadly labor conditions in mines, mills, and factories. Finally, the Wagner Act — aka the National Labor Relations Act (NLRA) — in 1935 recognized the right to collectively bargain and organize in the private sector. Subsequently, similar rights were extended to workers in the public sector.

‘A countervailing power’
Yet the 1950s was the high point of unions. Corporations hated them. Unions represented what John Kenneth Galbraith called a “countervailing power” on corporations. Yes, in many cases unions sided with management on protectionist practices (think of the car industry) and had corruption problems (Hoffa and the Teamsters), but they also did a lot of good, by raising the American standard of living. The real problem for corporations, and for Republicans, was that unions supported Democrats. They provided dollars, organizing, and votes for Democrats.

But the Vietnam War and the dual oil embargos in the 1970s precipitated a major fiscal crisis that produced decreased corporate profits. It was at this point that corporate and Republican interests converged to attack labor unions. Restructuring domestic and global labor markets by busting unions and dismantling government regulations would free corporations to cut wages, restore profits, and shift capital across the world. The beginning and most visible effort to break unions and limit their power was the decision by President Reagan to dismantle PATCO in 1981. He busted the air traffic controllers’ union and that sent a clear signal that it was OK to go after unions. 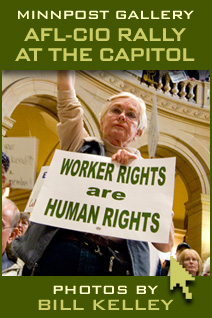 Together the GOP and corporations waged a terrific battle against unions, claiming that America’s economic decline was rooted in high union wages, inflexible rules, health care and benefits, along with excessive government regulation and taxation. Big government and unions were the cause of American decline. Of course, not all of this is true.

Comparatively, there are higher rates of unionization in Europe — along with higher wages, and these countries, especially Germany, remain very competitive. Yet blame the unions because they form a great scapegoat for American industrial decline. They hide the fact that many corporations failed to invest in new facilities in America and instead bled old ones. They failed to respond to new technological advances by Japan and instead sought restrictive trade policies to prevent foreign competition. One could go on and on, but the short answer is that unions and workers were not the cause for badly designed American products and they were not the reasons for economic outsourcing to China. Increased corporate power, globalization, and the drive to maximize profits, as Bennett Harrison and Barry Bluestone wrote in “The Great U-Turn,” were the cause.

Private-sector unions weakened
The war on private-sector unions and government has been a success. Private-sector unions are now relatively weak. They constitute about 8 percent of the private-sector workforce. Their decline correlates with significant increases in economic inequality, declining wealth for the poor and middle class, and the weakening of the Democratic Party. The one stronghold for unions is the public sector. They constitute a larger percentage of the public sector workforce than do unions in the private sector. They generally support Democrats, and in return for lower wages compared to the private sector they have received greater job security and often better benefits. The job security in part was a consequence to prevent the politicization of the government, to protect from political reprisals, and limit patronage and the spoils system.

Public-sector unions are now under attack as governments now face their own version of a fiscal crisis. The battle in Wisconsin is part of a broader agenda to demonize public employees and government. It is easy to fault teachers and tenure for why Johnny can’t read. Instead of adequate funding for schools or better social-welfare programs to prepare poor students to go to schools, blame teachers. Say it is their fault and take away tenure, put them on pay for performance, or close schools down.

None of this solves the problem.

Similarly, blame years of regressive tax policies on public-sector unions and fault workers as the cause of structural deficits. It is just so easy. It is a great wedge issue — play the resentment and divide and conquer cards with taxpayers and private-sector workers. Somehow if only corporations, and now government, could be free to hire and fire at will, slash wages, and gut benefits, then we would not need to raise taxes and our deficits would disappear. It is such a simple solution — instead of raising the standard of living for all workers, cut public-sector unions down. Level the playing field by bringing everyone down. This is what the battle in Wisconsin is about.

David Schultz is a professor at Hamline University School of Business, where he teaches classes on privatization and public, private, and non-profit partnerships. He is the editor of the Journal of Public Affairs Education (JPAE). Schultz blogs at Schultz’s Take.