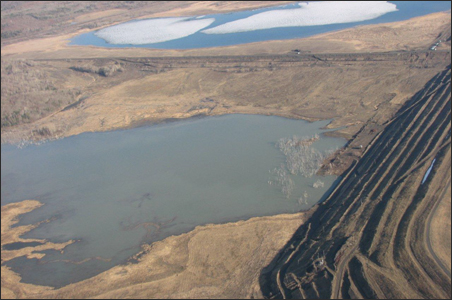 Iron Range legislators and mining-company officials have repeatedly stated that copper-nickel mining is best done here in Minnesota, with our strict environmental laws. PolyMet Mining Corp. has spent five years trying to make its way to permitting. After four years of environmental studies, the project’s Draft Environmental Impact Statement (DEIS) was released in November of 2009. Citizens who combed through 1,800-plus pages of the DEIS found few details for treatment or mitigation of likely violations of water quality standards. In February of 2010, the Environmental Protection Agency (EPA) rated the DEIS as EU-3, Environmentally Unsatisfactory-Inadequate. In short, metallic sulfide mining cannot be done in northeast Minnesota without polluting the watershed for centuries to come.

One year later, we have a Democratic governor dependent on the votes of the Iron Range and a Republican-dominated Legislature bent on facilitating industry. The result is a race to see who can do the most to facilitate the permitting of copper-nickel mining. Without the weakening of current regulations, the mining of sulfide ores cannot meet state standards. Lowering our standards puts northeast Minnesota on par with Third World countries.

Citizen legal appeal and the IRRB
In January of 2011, the Iron Range Resources Board (IRRB) was served notice of intent to sue by five environmental groups. The groups gave notice that a $4 million loan to PolyMet for land purchase was illegal under the Minnesota Environmental Policy Act (MEPA) as being done ahead of, and with the possibility of influencing, the permitting process.

The background: PolyMet’s open pits would be located on land that is currently part of the Superior National Forest. According to federal law, open-pit strip mining operations are prohibited on USFS land originally purchased under the Weeks Act for watershed protection. The USFS has been ducking this issue for the past 5 years. The USFS could have denied PolyMet the surface use of its lands. Instead it has initiated a draft EIS process in preparation for a land exchange with PolyMet. The 6,700 acres needed by PolyMet include over 1,000 acres of high functioning wetlands that are ARNI (Aquatic Resources of National Importance). To find land parcels of equal value for PolyMet to purchase for exchange may be difficult and costly. Hence the IRRB loan.

The IRRB is a state agency that is funded by taconite production taxes paid in lieu of property tax, managing approximately $40 million a year to assist with Iron Range economic development and diversification.  In order to evade the lawsuit and allow the PolyMet loan to go forward, the streamlining law specifically exempts the IRRB from prohibition to perform actions to promote a project before environmental review is complete.

The streamlining law also removes citizen rights to use Minnesota district courts for environmental lawsuits. All suits must now go through a more expensive Minnesota appeals-court process. The constitutionality of altering jurisdiction and bypassing district courts appears questionable. Litigation is the only avenue granted citizens as a means of seeking recourse for harm.

Proposers can draft own environmental review
The new law allows project proposers to prepare their own environmental review.   When companies hire their own consultants, much of the information presented to the agencies for evaluation can be considered proprietary. The agencies must then rely on figures given by the company or perform duplicate studies. Under these circumstances, it is difficult to evaluate potential impacts.

When companies control the environmental review process, citizens lose access to reliable technical information. In addition, citizen response time to the review, no matter how complicated, is now limited to 30 days.

Lowering Minnesota standards
Another regulation under reconsideration is the Minnesota standard of 10 mg/l of sulfate in the state’s watersheds.  Studies show that wild rice was abundant in the upper St. Louis River watershed prior to the 1950s, before taconite mining. Remaining wild-rice stands have stunted growth. The tailings basin formerly owned by the LTV taconite company and purchased for use by PolyMet is currently leaching sulfates and other contaminants into the St. Louis River watershed.

Both taconite plants and their coal-fired power suppliers release mercury into the air. When sulfates are present in the watershed, they become part of a biochemical process that converts mercury into methyl mercury, the form that bioaccumulates. There are now fish advisories on most northern Minnesota lakes to limit the amount of fish eaten per week. Advisories are based upon studies that show the human body can excrete limited amounts of mercury. But that amount can still be toxic to infants, young children and the elderly. Mercury has been implicated in lowered IQ, autism symptoms, neurological symptoms, and Alzheimer’s disease.

It is known that Minntac’s taconite tailings basin is leaching 3 million gallons per day of sulfates and other pollutants into two watersheds. Minntac is also seeking to release recycled water that has been used in plant operations since start-up and is becoming corrosive to plant equipment. The DNR has not been able to figure out where best to divert this contaminated water. Unfortunately, governmental agencies have been lax in forcing taconite operations to meet state water-quality standards. The result is the loss of wild-rice crops and the fact that the St. Louis River Watershed is so contaminated with mercury that the MPCA cannot conceive of a plan to clean it up.

Meanwhile, state Rep. Tom Rukavina is proposing to increase the sulfate limit. Rather than insist that our waterways be cleaned up, Rukavina plans to pave the way for both the expansion of Minntac and the opening of an entirely new sulfide mining district, which would greatly increase the amount of sulfates, mercury and toxic heavy metals in the watershed. His basis for doing this is to promote 360 projected PolyMet jobs. If our area legislators took as much interest in Cirrus Aircraft in Duluth, which is in the process of being sold to a Chinese company, they could ensure the safety of 500 already-existing local jobs.

Cravaack is either neglecting to notice, or has not been informed, that PolyMet is a Canadian company, that all of PolyMet’s metals would be semi-processed and need further smelting, and that PolyMet has a market agreement with mining conglomerate Glencore to sell its metals on the global market. Inquiries for purchase of these semi-processed metals are coming from China. Both China and India are stockpiling metals as they seek to become the world’s next industrial giants. The United States would need to buy these metals back from our major competitors.

However, it is to mining-company advantage to have Cravaack claim that these metals are strategic. According to the Boundary Waters Canoe Area Wilderness Act of 1978, the BWCAW can only be mined in the case of national emergency. Twin Metals and others have deposits that border the BWCAW and dip down under the wilderness. By claiming these metals as strategically important, Cravaack could be facilitating the opening of the BWCAW to mining operations. Cravaack would do better by the citizens of this country if he would research the recycling of metals from military equipment for strategic use.

Financial assurance
Other legislation to promote mining is also wending its way through the corridors of the state Capitol. Observers have noted that Brad Moore, formerly of the MPCA and now working for PolyMet, and LaTisha Geitzen, PolyMet’s vice president of public, environmental affairs, have been wandering the halls with their input.

Streamlining a toxic environment for future generations
While legislators have jumped on a bandwagon to facilitate sulfide mining, they have lost sight of the long-term consequences. The mining of less-than-1-percent ores results in 99 percent waste rock. The cost of fuels, equipment, machinery, electricity, chemicals and transportation are all projected to rise. The potential for these mines to remain operational for more than 20 years is highly doubtful.

Both Japan and Canada are already developing industries that will recycle all electronic waste. They are realizing that electronic equipment is being updated so quickly that we cannot manage the resulting waste stream. Also, as oil prices continue to rise, demand for many products will decline, while citizens start looking for energy-efficient solutions.

Our legislators seem to be unaware of these future trends. We, as citizens, must stand up and defend the rights of our children and our grandchildren to a future that is based on clean water, clean air, and a healthy environment. The jobs most needed right now are those that will clean up our toxic messes and take us to a sustainable future. To facilitate the opening of a copper-nickel sulfide mining district in the Arrowhead Region of Minnesota when the state cannot manage the pollution created by taconite mining is irresponsible policy. Our legislators and governmental leadership must be held accountable.