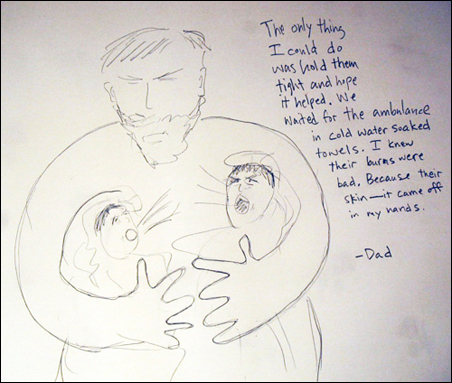 Today is the one-year anniversary of The Accident. My wife and I were not sure what to do about that, because it is also our oldest son’s birthday and we didn’t want to take anything away from that.

A year ago on April 13 we were getting ready to celebrate his birthday (immediate family only, with cupcakes and a special supper) when the accident happened. My youngest and middle son were severely burned when the boiling water on the stove fell on them.

This year we wanted to focus on a birthday, and not the accident, but how do we do that?

Sam, our middle son, who had to have his feet surgically repaired with skin grafts because of the accident, made a suggestion:

“Let’s draw pictures from the accident.”

All agreed to the plan
So, a couple of days ago, we all drew pictures about the accident and hung them up in the kitchen. The plan we all agreed to was to take them down on April 12, and move on, and celebrate a birthday like you’re supposed to!

Sam came over and gave me a hug and asked, “Why are you crying? Because we are all better now.”

I had to chuckle as I hugged him back. Kids are so dang resilient.

Recovery, resiliency
He’s right, their burns are healed. Our youngest didn’t need surgery and recovered. And Sam’s feet have healed really well, even though he still has to wear a compression sock and receive treatment for his right foot. He just started karate. His surgeon agreed Sam should practice karate barefoot, if that’s what the other kids do.

We’ll take down the pictures we drew and archive them — and reclaim April 13 as the day that is our oldest son’s birthday. I love that plan.

And I’m glad one of my kids recognized I needed this to happen so I could draw that picture. So I could move on.

Karl Pearson-Cater is MinnPost’s director of operations. Later this month he will begin a new position at Ciceron. Karl originally published this post to his Bigboxcar Tumblr blog.

One year later: How do we put The Accident behind us?