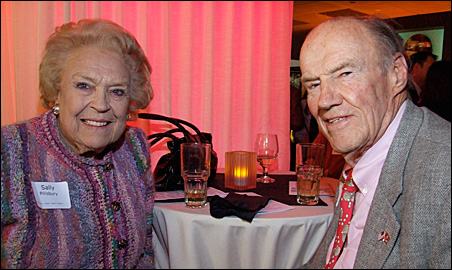 Just out of college, I was invited to attend a meeting at Southways, the Pillsbury Brackett Point home on Lake Minnetonka. The outspoken, vivacious Sally Whitney Pillsbury was convening people of all stripes to talk about how average citizens throughout the state could encourage ending the unpopular Vietnam War sooner rather than later. My experience was as a novice Republican campaign and field operative. I remember thinking about how my host with the famous name was approachable, informed and all about getting things done in a hurry.

Sally’s brother, Wheelock, a Dain CEO and investment banker, had run for U.S. Senate in 1964 and would run again as the Republican candidate for governor in 1982.

Sally’s husband, George, then a recently retired Pillsbury Co. executive, was a freshly minted member of the Minnesota State Senate. I knew George a bit through my work on the Senate caucus staff and would come to know him far better through our shared interests in politics and policy.

For the last four years, George, soon to be age 90, has been working with Star Tribune journalist and author Lori Sturdevant on a family history. The book, “The Pillsburys of Minnesota,” explains how the Pillsbury legacy came to be, with Minnesota as a prime economic and civic beneficiary; contributions over 155 years (1855-2010) are meticulously explained.

Paths to leadership
The book is a worthy contribution to the state, explaining how the individuals in the Pillsbury family were grounded, raised and called to leadership in diverse and impactful ways. More interesting than a history textbook, it shares in one place the story of a family that has for generations made a difference in our state and nation. (At a LearningLife Forum at the University of Minnesota on Thursday, Sturdevant will interview George and Sally Pillsbury about their family’s contributions to Minnesota.)

The book is most timely, as George and Sally and their generation appear to be the last in a long line of the Minnesota family business tree, the Pillsbury Co. having been merged into General Mills a decade ago.

The early generations of the extended family in New England in the 1800s came from hard-working, middle-class backgrounds with some adventuresome entrepreneurs ultimately finding their way into retail, food, land management, mining and insurance businesses in Minnesota.

In 1855, John S. Pillsbury arrived, followed by nephews Charles and Fred and, later, his brother George (1878). They settled in the tiny community of St. Anthony Falls, located on flowing waters of the power-generating Mississippi River. The family founded flour mills that became the world’s largest in 12 short years. The Pillsburys pioneered corporate profit sharing with employees and understood the value of a large and prosperous middle class as early as the 1880s, many years before Henry Ford did.

Many family members involved in public service
Just as the expansive Pillsbury family looked out for one another, often involved in each other’s business ventures through both ups and downs, many members of the family also have been called into significant public service — including as a University of Minnesota regent, governor of Minnesota, member of Congress, mayor of Minneapolis and several state legislative roles. Often in unpretentious ways, members of the Pillsbury family have come to call friends homemakers from “Bake Offs” to European royalty to White House occupants and all of those in between. We learn the story behind key Minnesota nonprofit institutions from those serving the poor, hospitals and the arts and see how they have been significantly shaped by Pillsbury family time and money.

Stories of business risks and rewards, fights for ownership and hostile takeovers are recounted. Of special interest is the World War II convening of the extended clan of John and Eleanor (“Juty”) Pillsbury, George’s parents, in Minnesota. They lived together and life continued in purposeful and patriotic ways for the mothers and grandchildren as four brothers and two sons-in-law were called into military service. One son, Charles, died in 1943 when his plane was shot down in Bougainville in the Pacific.

An ‘impressive call to citizenship’
Author Sturdevant said that she “fell in love with the Pillsbury family and its impressive call to citizenship” while painstakingly researching family linkages and activities with the special cooperation of General Mills Corp. and additional assistance from the Minnesota Historical Society and archivists in New Hampshire, Dartmouth College, Plymouth Congressional Church, and the U’s Elmer L. Andersen Library, along with many family members and individuals close to them.

As former Minnesota Gov. Al Quie states in the book’s foreword, Pillsbury family principles span the generations. They include the importance of fostering the kind of integrity that will assure wise life choices; treating employees right through encouragement and collaboration; understanding that real joy comes when one doesn’t get the credit; the importance of not holding grudges; and a conviction that the arts are valuable for everybody.

‘The Pillsburys of Minnesota” is the factual story, finely researched, about how one family became an integral part of the fabric of Minnesota and, author Sturdevant believes, how the values continue to contribute to a strong state. As a reflective work of history and as a template for responsible civic engagement, this unique family story is worth a read.

Chuck Slocum is the president of The Williston Group, a management consulting firm. A version of this review appeared in Politics in Minnesota. Slocum can be reached at Chuck [at] WillistonGroup.com.