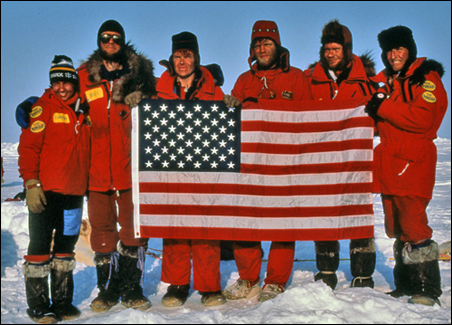 ELY, Minn. — Twenty five years ago this month, an expedition team reached the North Pole after enduring 56 days and 1,000 miles across fractured, shifting sea ice in temperatures that dipped below -70 degrees Fahrenheit. The epic ski and dogsled trek with its eight-member, 49-dog crew was a deliberate throwback to the days of the early explorers. This accomplishment, the first confirmed trek to reach the Pole without resupply, was deemed by National Geographic “a landmark in polar exploration.”

To commemorate the achievement during this anniversary year, the Will Steger Foundation, together with the Canadian Consulate and Minnesota Historical Society, will host two public events at the Minnesota History Center. These include an Expedition Family Day from 12 to 4 p.m., Sunday, May 15, with team members, a sled dog and arctic clothing and equipment (open to the public with museum admission), and, at 7 p.m. Tuesday, May 17, a Team Member Reunion presentation (reservations required at 651-259-3015 or tickets.mnhs.org). In addition to Minnesotans Will Steger, Ann Bancroft and me, team members attending the reunion will be Richard Weber and Brent Boddy from Canada, Geoff Carroll from Alaska and Bob McKerrow from New Zealand. In the meantime, I’d like to share a few memories.

In the early 1980s during the team’s training and preparation, public interest mounted rapidly for this home-spun project, which was based from a sod-roofed log “homestead” near Ely and supported initially by sales of buttons and T-shirts. Then, during the two-month traverse of the Arctic Ocean in spring 1986, TV and newspaper updates from sketchy radio communiqués kept Minnesotans apprised of the expedition’s progress — as well as its many setbacks — which included Ann’s plunge through thin ice, a tent fire triggered by a faulty stove, the devastating loss of a lead dog, a team breakdown over diminishing supplies and a malfunction of their sole navigation device just days from their goal.

The expedition’s ultimate success triggered a collective cheer across the state and resulted in a National Geographic cover story, a best-selling book and film, both titled “North to the Pole,” and commendations from President Ronald Reagan and the World Center for Exploration. Hailed as a “triumph of the human spirit,” the group’s success reflected the conviction of Will’s diary entry the day the journey began: “The faith that moves mountains would take us to the Pole.”

Stories to be shared, and a time capsule unveiled
The accolades were deeply gratifying for the team members. Now 25 years later, stories from this trip continue to be remembered and will be shared by team members at the upcoming anniversary events. The team will also be unveiling the Polar Time Capsule, a sealed container we left at the North Pole with mementos of the trip. We never expected to see it again, but against all odds it was found years later washed up on a beach in County Donegal by an Irish carpenter and is now on its way to Minnesota to be displayed at the events.

Many of our stories involve the sled dogs, on whose herculean efforts the expedition depended. The team mascot, Zap, distinctive with one blue eye and one black, was remarkably personable and worked the crowds at pre-trip fundraising events. Folks would chant ‘Zap to the Pole!’ as he made his way up and down the aisles greeting everyone and as I attempted to give my speech. But I could just as well have been reading from the dictionary. No one would have noticed since Zap kept them completely engaged. On the way to the Pole, Zap sported a red velvet cape emblazoned with a big gold “Z” that team members draped over him on cold nights to supplement his thin coat.

Another favorite was a dog named “Sam.” A wild dog who had taken up residence at a radar station in the Canadian Arctic, he followed along with the team when they sledded past there on a 1985 training trip. Team member Richard made it his mission to befriend the timid animal and when, just for fun, he slipped him in harness, he found to the team’s amazement that Sam was a voice-command lead dog, probably a long-lost member of a Yukon trapper’s team. A year later Sam was on his way to the North Pole with the team and, in 1989, he was part of Will’s South Pole expedition as well, thus making canine history as the one and only dog on expeditions to both ends of the earth.

Sadly, another one of the team’s lead dogs, Critter, did not make it the Pole. He was the loyal companion of team member Bob Mantell and led Bob’s team with power and precision. But Bob was one of two team member who sustained serious injury — frostbitten feet– and was evacuated by airlift. (The other was Bob McKerrow, whose ribs were broken when he got caught under a runaway sled.) Upon departing, Mantell opted to leave behind his dog team in hopes they would help the team, and a part of him, reach the Pole. But in Bob’s absence, Critter immediately went into a slump and soon was so despondent that team members cradled him in a dogsled as his rigor faded. His death, the team surmised, resulted from a broken heart.

The darkest moment — and more difficulties
Burying Critter behind an ice block seemed the darkest moment of the journey, but more difficulties followed. After a month on the trail, an inventory revealed we had used up well over half of our supplies but had covered only a third of the distance. “Desperation Camp,” as the scene was referred to in expedition member’s diaries, brought some tears, some prayers and some heated arguments about our options. In the end, we opted to lighten our loads by jettisoning every ounce of gear not necessary for survival. Out went extra jackets, camera tripods, covers off diaries, handles off tooth brushes and several of our sleeping bags, which now weighed over 50 pounds with accumulated ice and frost. For the remainder of the trip some slept snuggled two or three together in the remaining drier bags.

The lightened loads helped. Our pace quickened. We soon topped 20 miles a day and one day, traveling ’round the clock to make the most of clear weather, topped 40 miles. Momentum built so rapidly that we almost felt unstoppable. But just a few days from our destination our sextant, our only navigational device, malfunctioned and we were essentially lost at sea among millions of miles of drifting ice. With nerves frayed to near breaking point, team members disassembled the delicate scientific instrument with our only tool, a Swiss Army knife, and with incredible good fortune were able to get the sextant and the trip back on track.

Having departed Canada’s northernmost shore on March 7 with 3 tons of supplies and equipment, we arrived at the Pole on May 1 with just a few pounds of food left. There we were rewarded with clear, calm weather and our one and only day above zero — a balmy eight degrees. A happy crew of six and happy, howling dogs posed for a team photo with the American flag, an iconic picture that later became a popular poster.

Our celebrations while awaiting the arrival of ski planes to airlift us home included the ceremonial tossing of a special plastic tube off into the sea ice. Dubbed the Polar Time Capsule, it was a piece of plumbing pipe capped on both ends in which team members whimsically placed keepsakes including a Boy Scout scarf, a beaded Indian belt, a letter to Santa Claus from a school child and a small lace prayer circle. After the trip executives with DuPont Corp., the expedition’s main sponsor, hatched a plan to enhance international media coverage of the expedition. They announced a $5,000 reward for recovery of the time capsule. It was all meant ‘tongue in cheek”; the story ran worldwide, although no one expected anything to come of it.

A 2,100-mile journey for the capsule
But three years later a carpenter named Peader Gallagher was walking a beach near Dublin when he spotted an odd bit of flotsam. He took it home, cracked it open and found one identifiable item inside: a Polaroid picture the team had taken of themselves at the Pole that referenced “National Geographic.” Perplexed but assuming his discovery might have some significance, he sent the photo to National Geographic in Washington, D.C. Editors there were astonished to realize that, a year and a half after being deposited at the North Pole, the time capsule had been found. They alerted DuPont executives, who in turn made plans to alert the man of the reward and surprise him with an all-expense-paid vacation to New York. The surprise was theirs because he declined the invitation to New York (though they did send him his check). The capsule survived a 2,100-mile ocean journey to reach Ireland.

The team members who are reuniting from around the world for the events, and whom the public will have a chance to meet at the Minnesota History Center are:

•    Will Steger, Ely & St. Paul, Minn. In 1989-90, he led the first dogsled traverse of Antarctica with a team of 7 from 7 countries, another milestone in his 45-year polar-expedition career. He has become a formidable voice on the issue of climate change and a global environmental leader through his Will Steger Foundation.

•  Ann Bancroft, Scandia, Minn. In 2001 she (with colleague Liv Arnesen) skied to the South Pole, securing Ann’s place in history as the first woman to trek to both ends of the earth. Her Ann Bancroft Foundation promotes the potential and achievements of women and girls. Ann is planning another expedition to Antarctica in 2012.

• Geoff Carroll, Pt. Barrow, Alaska. A wildlife biologist, Geoff is an expert on arctic ecosystems and sea ice and maintains a dog team to enjoy life on the land.

• Richard Weber, Alcove, Quebec. Canada’s top polar explorer, he has led more than 50 arctic expeditions. In 1995, he completed the first and only trek from Canada to the North Pole and back with no outside assistance, and with his wife, Josee, operates an eco-lodge on Lancaster Sound in the Canadian High Arctic.

• Brent Boddy, Cambridge Bay, Nunavut. Granted the Order of Canada award for his polar endeavors, Brent continues his love of arctic adventuring in his retirement from overseeing public works for a native village in Canada’s western arctic.

• Bob McKerrow, New Zealand. A mountain climber and polar explorer who was a member of one of his country’s first teams to winter in Antarctica, he works with the International Red Cross. Since the 2004 Indian Ocean Tsunami, Bob has been coordinating relief efforts and public health projects in India, Sri Lanka, Maldives and Indonesia.

Bob Mantell, “Ironman Bob,” as he was called for his dogged perseverance and legendary stamina on the 1986 expedition, is the one crew member among the eight whom the team has not been able to locate to invite to reunion events.

Paul Schurke, of Ely, Minn., has guided and participated in a number of polar and high-Arctic expeditions, including the 1986 North Pole Expedition. In 1989 he co-led the Bering Bridge Expedition from Siberia to Alaska. He and his wife, Sue, operate Wintergreen Dogsled Lodge.