A cuts-only budget approach follows the mantra that we’re broke, but we’re not – wealth has just been concentrated among the few

MARSHALL, Minn. – On March 14, the Minnesota House of Representatives set budget targets for resolving the state’s projected deficit. Following closely on these targets, the House and the Senate attempted to resolve the budget deficit with a cuts-only approach. The chart below is copied verbatim from the House webpage and does not reflect the thinking of a left-wing conspiracy. This is the vision for state government proposed, and with some modification, passed by the Republican majorities.

This cuts-only approach was vetoed by Gov. Mark Dayton. As passed, the proposed budget would have practically zeroed out the public funds for Metro Transit buses and light rail and cut funding for higher education back to a state appropriation lower than in 1999. The targets would have resulted in fewer Minnesotans with health care, less money spent per pupil in K-12 education, higher property taxes for most Minnesotans, and many hundreds of lost jobs in the public sector, including police officers, fire fighters, teachers, and medical professionals. Ironically, the House targeted “jobs and economic development” for a 51 percent cut!

There is a mantra in today’s political discourse that the nation is broke and we can no longer afford to educate our young or care for our elderly. Instead of tending to the commons we need to transfer money into the hands of the “job creators” and shrink the “job killing” state. This mantra is repeated over and over, but it almost never includes discussions of the costs of war and empire, now by some estimates nearly half the federal budget [PDF].

In fact, the nation is not broke, rather wealth has concentrated in the hands of the super wealthy and a small but powerful segment of the super wealthy do not think they need government services like public schools and universities or police and fire protection. They are true believers in the market. They are fundamentalists for capitalism.

For them, the market is the only solution to every problem. If the problem is a market meltdown, the solution is deregulation and a tax cut. Is high unemployment the problem? Try privatizing something and a tax cut. Suffering from an achievement gap? Well, the obvious solution is to gut spending on public schools, replace them with privately run charter schools, and cut taxes.

Below are some charts representing the actual distribution of income and wealth in the United States. 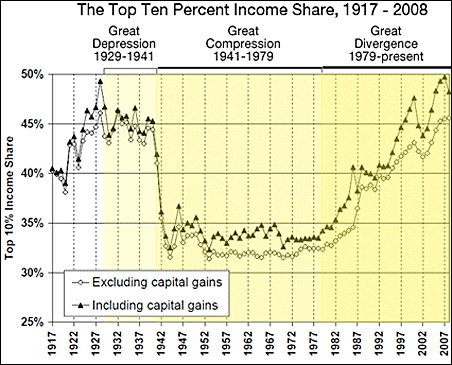 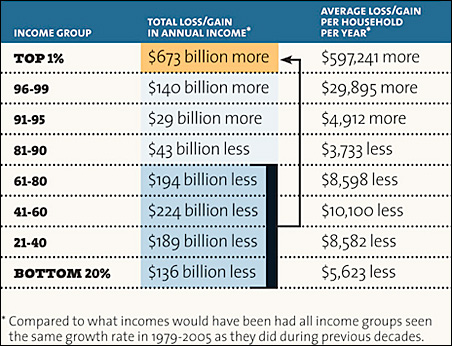 America is not broke; the problem is that since 1980, we have become dramatically unequal in terms of wealth and income. Nobel Prize-winning economist Paul Krugman, among others, calls this the Great Divergence. As Gov. Dayton has pointed out, the reason he can raise $1.8 billion with a modest tax increase on the top 2 percent of income earners is because that is where the money is.

Income tax rates are at historic lows in the United Sates and in Minnesota. We have been taxing income in the United States for 98 years and in only 16 of those years have the rates been lower than they are today (1913-1916, 1925-1931, 1988-1992). If low taxes, privatization and deregulation were the answer we would not be suffering from lingering unemployment right now.

Let’s face it; the market is not the answer to every problem, and neither is government. America and Minnesota have prospered when we tend to the individual and the commons, when the market and the public sector both flourish.

A cuts-only budget approach follows the mantra that we’re broke, but we’re not – wealth has just been concentrated among the few