ELY, Minn. — Minnesota legislators were eager to enact legislation to prevent the spread of aquatic invasive species (AIS) this past legislative session. On May 27, Gov. Mark Dayton signed into law SF 1115/HF 1097, which included AIS provisions.

Both the Senate and the House, while crafting respective AIS legislation, failed to recognize the irony of what they were asking the governor to sign.

The needs of zebra mussels, a target AIS, are illustrative.

“Senator vows to deal with mussels,” proclaimed the Alexandria Echo Press after Minnesota State Sen. Bill Ingebrigtsen – R-District 11, and chairman of the Senate Environment and Natural Resources Committee – spoke in Alexandria and advocated for AIS legislation.

Zebra mussels need calcium (calcium carbonate) to build their shells and for gamete production. “Dissolved calcium in water is an essential constituent of shells for zebra mussels to grow from larvae to veligers and adults. It was shown that there is a significant relationship between calcium content and zebra mussel density.” (G.L. Mackie et al., 1989)

Limestone is composed of forms of calcium carbonate — and the extensive use of limestone is a major part of how sulfide-mining companies claim they will control the leaching of heavy metals to Northern Minnesota waters. So Minnesota is spending millions to eradicate zebra mussels, while at the same time it is spending millions to promote an industry that will feed them.

Zebra mussels were first discovered in Minnesota in 1989 in the Duluth-Superior Harbor. According to unpublished data from the Minnesota Department of Natural Resources, “Subsequent sampling during the 2000 field season suggested that the population increased dramatically.”

Water on the WEB noted: “Lake Superior appears to be relatively immune to infestation by this invader because of low calcium concentration. Its bays, however, such as the lower St. Louis River … may not be immune to zebra mussel infestation.”

“Calcium concentrations range from around 13 to 23 mg/l in Duluth-Superior Harbor at the western tip of the lake … with the higher levels apparently due to an influx of calcium from the St. Louis River …” (Andrew N. Cohen and Anna Weinstein report, 2001). And a 2008 DNR Land and Minerals report stated: “When the St. Louis River watershed is separated into its major tributaries, approximately 24% of its land area or 10 major tributaries have mining activities located within their boundaries.”

Anyone driving through Duluth can see the huge piles of limestone waiting on the docks to be hauled by rail to the taconite mines and added to taconite pellets during processing.

At Minntac, one of the “potential major impacts” identified by the Minnesota Pollution Control Agency (PCA) was “aquatic resources — impacts due to water chemistry.” The PCA was specifically concerned “about the increasing concentrations of sulfate, chlorides, hardness, and specific conductance of the waters” in Minntac’s tailings basin — and the impacts of their release to adjacent watersheds.

According to the Draft Minntac Water Inventory Reduction Environmental Impact Statement, a 5,000 gallons-per-minute (gpm) release from the tailings basin could be directed to either the Dark River Watershed, or to Lake Vermilion via the Sandy and Pike Rivers — or with mercury exceedances, to West Two River Reservoir and the St. Louis River Watershed. Seepage discharges of approximately 3,000 gpm are already “negatively impacting the Dark River and Sandy River watersheds.” If Minntac’s tailings basin release were directed toward Lake Vermilion there would be an increase “in the numbers of exceedances of chloride, TDS, specific conductance and hardness water quality standards.” Hardness refers to calcium and magnesium levels.

The LTV Steel Mining Co. plant and tailings basin at Hoyt Lakes has long drained its toxic waste to the St. Louis River watershed, and will continue to do so — mega multiplied — if PolyMet’s NorthMet sulfide mine is permitted and reuses the LTV site for its massive toxic sulfide mining waste, with correspondingly massive calcium issues.

Any increase in mining-related calcium releases to the system would increase the calcium available to zebra mussels.

Dunka is the canary in a sulfide mine
Near Ely, the Dunka taconite mine is within the sulfide-bearing Duluth Complex and is proposed to be reused by Twin Metals for its sulfide mining waste — Dunka already drains its own toxic brew by way of Unnamed Creek to Bob Bay of Birch Lake. Birch Lake is part of the Kawishiwi watershed and its waters flow to the Boundary Waters Canoe Area Wilderness via the Kawishiwi River.

For decades after the MEQB Regional Copper Nickel Study, limestone was used at Dunka in an attempt to treat LTV’s still toxic runoff from sulfide waste rock.

In 2007 two samples were taken from the main part of Birch Lake. The calcium levels were at 7.1 mg/l and 15 mg/l (PCA). Apparently there has not been any recent water quality monitoring of Bob Bay.

If Dunka, a small taconite mine by industry standards, can reflect such water-quality changes with its comparatively miniscule sulfide waste rock, what would we see for calcium and pH changes from the immensity of 99 percent waste left by major sulfide-mining operations proposed for the Duluth Complex?

In “Zebra Mussel’s Calcium Threshold and Implications for its Potential Distribution in North America,” it stated that … zebra mussel populations have been reported from several sites with calcium concentrations between 13 and 25 mg/l … and studies have estimated calcium thresholds as low as 8.5 mg/l” (Cohen and Weinstein, 2001).

The Minnesota Department of Natural Resources (DNR) Invasive Species Program states that its purpose is to “curb the spread and minimize harmful effects of nonnative species that can: cause displacement of, or otherwise threaten, native species in their natural communities; or threaten natural resources or their use in the state.”

Yet the DNR Land and Minerals Division is promoting sulfide mining with its elevated sulfate levels, resultant methylmercury contamination, and release of toxic heavy metals, including nickel and arsenic, that all undoubtedly cause displacement of, or otherwise threaten, native species in their natural communities; or threaten natural resources or their use in the state.

The rusty crayfish
By the way, rusty crayfish also love dissolved calcium. In 1999, the Freshwater Foundation newsletter headline read: “Another Invader Attacks the Duluth Superior Harbor.” The lead article went on to say, “On June 25, while inspecting the harbor at Duluth, MN and Superior, WI for zebra mussels, Minnesota Sea Grant’s Exotic Species Information Center Coordinator, Doug Jensen, discovered four rusty crayfish (Orconectes rusticus). The discovery was made on the Minnesota side of the St. Louis River estuary…” 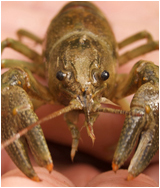 Faults, joints and permeability define the Duluth Complex
Politics in Minnesota reported that Rep. Denny McNamara, R-District 57B, chair of the House Environment, Energy, and Natural Resources Policy and Finance committee and ardent supporter of AIS legislation, earlier this year went after the Legislative-Citizen Commission on Minnesota Resources (LCCMR), saying the previously crafted LCCMR recommendations focus too much on studies and research.

An excellent example of study and research is the MEQB Regional Copper Nickel Study. In Volume 3, Geology and Mineralogy, it reported that the entire area underlain by the Duluth Complex is extensively faulted and that this faulting may have played an important role in the localization of the copper nickel sulfide mineralization. Faults and joints contribute to the permeability of the bedrock for water movement.

In other words, contamination travels through our waters — vastly and unpredictably.

McNamara would benefit from some study and research of his own, as would Ingebrigtsen (and many of our legislators).

Perhaps then Minnesota waters would have protection from sulfide mining — as well as from aquatic invasive species.