Former Gov. Tim Pawlenty has based his presidential campaign on truth-telling and toughness, and likes to talk about his pro-life credentials. But there are some problems with that version of the story. 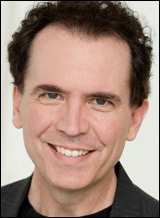 I’ve known Pawlenty since he was a young Republican state representative from Eagan, Minn.  We had some of the same friends and used to golf together once in a while. His campaign treasurer was my accountant. And Pawlenty told me then that “personally,” he was pro-choice.

This was the late 1990s. A House seat was opening up in a northern Washington County district, which leaned Republican, and I was thinking about running for it, so Tim and I had lunch on the patio of St. Paul’s W.A. Frost & Company to discuss it. My great-great-uncle had founded the Minnesota Republican Party, so I had some family affiliation. As an entrepreneur I was fiscally conservative in the sense that I sought to maximize efficiency and performance. Plus, a Democrat probably wouldn’t have a good chance in the area, which would one day become Michele Bachmann’s home state Senate district.

Pawlenty is a very talented guy, and I respected his opinion. His first question was, “What’s your position on choice?” I hadn’t ever been asked the question quite so pointedly. “You’ve got to take a stand on that first,” he said. “Well,” I said, “OK. I don’t like abortion; I think it’s a really tough personal decision, but not something the government should be getting into one way or the other, so I guess I’m pro-choice.”

He looked at me over his lunch and said, “Well personally, so am I, but here’s the thing. You’ve got to find a way to get your mind around the language of saying ‘pro-life.’ It’s in how you phrase it.”

I’ve since learned I’m not the only one Pawlenty has said this to.

The closet moderate
Parsing semantics and taking a stand seemed to me like two very different things. But to Pawlenty, the closet moderate, they had become one and the same, and this has come to define his political career.

I asked Sarah Stoesz, the executive director of Planned Parenthood of Minnesota, North Dakota and South Dakota, her impressions of Pawlenty’s closeted pro-choice “stance.” She reminded me how “he turned away federal funds for abstinence-only sex education before he got the right-wing religion bug,” and says “he even supported a special, one-time $1 million appropriation for family planning back when he had some true common sense.”

This integrity issue doesn’t seem to bother Pawlenty the way it bothers me. He’s wanted to be president for as long as I’ve known him, and ambition can cause principles to take a back seat. He has shown a similar cynicism in his more recent about-faces on climate change and health care, stunning many Minnesotans and former allies and causing some to wonder: Do you really have to sell your soul to succeed in Republican politics?

Brawny has the strength you expect for those demanding jobs
This facility lends considerable irony to Pawlenty’s political autobiography, “Courage to Stand.” That irony is contained not only in the title but in the cover photo, which features an apparently doctored image of a barrel-chested Pawlenty, tough as a lumberjack from the Northwoods, and so strikingly similar to the Brawny Man paper towels logo that people started calling him “Scrawny Man.”

The Brawny brand implies qualities Pawlenty describes in himself on the campaign trail: strength, fortitude, toughness. But the image, like the candidate’s persona, is manufactured. In reality, Tim is a likable but often sarcastic, snarky, slender attorney who prefers dark suits, and looks somewhat less brawny — closer to Dennis Kucinich, perhaps, than the Brawny Man.

Pawlenty used a similar tactic in the video announcing his exploratory committee.

The video has Pawlenty in a macho-looking beige jacket that appears to be copying the one Scott Brown famously trademarked while campaigning during his special Massachusetts Senate race, a move Minnesotans, who know Pawlenty doesn’t dress like that, found amusing.

Cynical pandering is the stuff of political cliché. But some Pawlenty observers think he is overeager to abandon principles, positions, allies and identity to curry favor. This is mystifying since he has talent if he would just be himself. Since he is marketing himself for president as a truth teller who has the courage to stand, the question becomes important. Which version of Pawlenty is the real one: the one he projects, or that of his critics, old and new?

Consider this almost unbelievable example. Pawlenty is speaking at a Republican Party gathering in Iowa – but with a Southern accent.

It’s hard to understand why he would do this. It seems almost self-destructive in its potential to turn him into a laughingstock. It’s true that, like most leading Republicans, Pawlenty was raised in the South – South St. Paul, Minn., that is. Affecting a Southern accent in Iowa of all places seems especially odd. Iowans don’t talk like that, so it’s not as if he was trying to fit in. And they know Pawlenty was the governor of Minnesota — immediately to their north. One listener could only suppose he was trying to sound like George W. Bush. Really?

I remember returning from a Texas vacation as a kid. I nursed a drawl that made me feel like a cowboy. But I was a kid, not a serious candidate for president of the United States. What seems natural in a young boy whose identity is just forming is concerning, even mind-boggling, in someone running for the most powerful job on the planet.

Kissing the rings
Arne Carlson, the well-loved Republican former governor of Minnesota, sees Pawlenty’s cynical and sometimes baffling approach to politics as evidence of integrity sacrificed on the altar of ambition, and a lack of an internal compass.

“On the day before the GOP Convention,” Carlson told me, “my wife and I were driving in Southern Minnesota and listening to Gary Eichten of MPR interviewing Pawlenty and (Brian) Sullivan – both Gubernatorial contenders. At one point, Eichten asked Pawlenty if he were a Carlson moderate. The reply was absolutely not – no – Pawlenty and Brian Sullivan were identical in their (far right) social views.

“A day or so following the convention, Pawlenty and a young aide came to my business office for a visit. Pawlenty was gleeful over his victory and declared he could now move to the middle. I reminded him of the radio broadcast and he turned very sober. I then asked how he could move to the middle after he ‘kissed the rings’ of the far right. It was at that point that the reality sunk in.”

Paper prisoner
Carlson’s point is especially well-taken in a run for president. The president is subject to immense pressures from all angles, ranging from special interests to foreign powers. Pawlenty’s readiness to sacrifice principles for favor, to get his “mind around the language,” to project a manufactured image or deliver a major speech with an affected drawl, to kiss the rings, could perhaps limit his ability to think and act independently, and make him vulnerable to capture by whatever special-interest group appeals most forcefully.

That happened when the Taxpayers League of Minnesota was implementing Grover Norquist’s Taxpayer Protection Pledge and Pawlenty signed it days before the GOP endorsing convention to curry favor with the far right, in the same way that he had gotten his mind around the language on abortion. But after he was elected the pledge captured him. TLM’s then-leader, David Strom, came to be known in some policy circles as the shadow governor and at times arguably wielded more power over the legislative process than Pawlenty did.

Pawlenty’s response was, once again, to finesse the semantics. A new cigarette tax became a “health impact fee.”  He raised other “fees” and cut intergovernmental aid, forcing local governments and school districts to raise property taxes and levies to pay for services and schools that were previously funded by the state, arguing that the new taxes were their fault, not his. 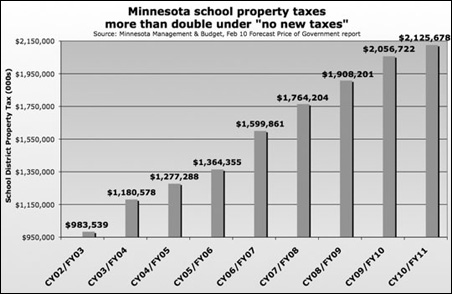 Ronald Reagan once said that another way to spell “fee” is T-A-X. Pawlenty’s semantical arguments were contradicted by that Republican axiom, and his claims of holding the line on taxes are contradicted by the math put out by his own administration. Consider the following chart – derived like similar ones in this piece from Minnesota Management and Budget’s Price of Government report, released while Pawlenty was still governor, which tracks the percentage taxes take out of total Minnesota income – this one comparing property and income taxes: 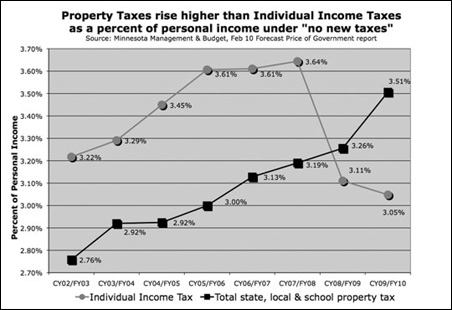 Pawlenty used short-term accounting shifts and semantic gimmicks to balance the budget over and again in a sort of bubble-gum-and-baling-wire approach to keep the old jalopy going until the economy improved or he got out of office. The tactic struck many finance experts as dishonest and caused former republican and democratic finance commissioners to join forces in criticizing the patches, which included raiding the state’s $1 billion tobacco settlement fund, the shift of $1.9 billion in school funding from before to after July 1, shifting it technically into the next biennium and effectively borrowing it from the schools, as well as accounting practices no business executive could get away with, such as accounting for inflation on the revenue side of the budget but not the expense side.

Carlson reminds readers of his blog that Moody’s lowered Minnesota’s bond rating as a result of Pawlenty’s actions. 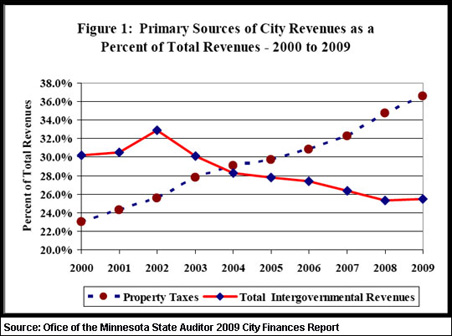 “Fees” and tuition soared as well, and a structural hole was left in the state budget for others to fill. 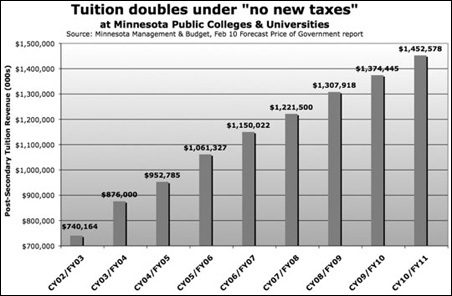 The result was a hollowing out of state finances under an eight-year drift toward – what?  We didn’t know. Pawlenty never articulated a clear vision of where the state should go under his leadership.

The budget mess he left behind still haunts the state. Here are the results in summary: 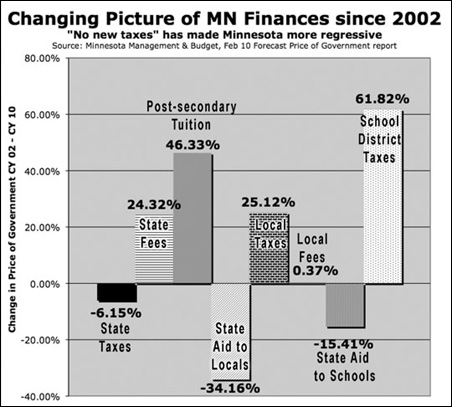 On both a per capita basis and as a percent of the general fund, Minnesota rang up the fourth largest budget deficit in the nation. 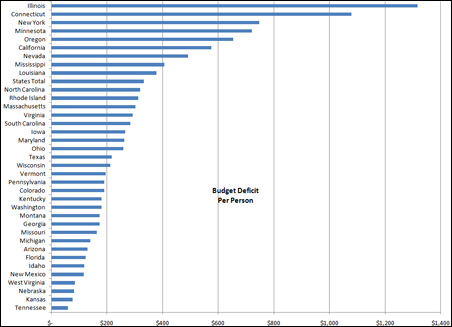 The hollow candidate
To have a vision, you have to know who you are and what you want to accomplish. To lead, you have to articulate that vision and have the stubbornness and conviction to push past opposition to the goal.

Tim Pawlenty is arguing that he has that, but his vision seems to be that he wants to be president. He wants it so badly that he’s willing to do anything, say anything – be anything.

Even now, his self-proclaimed “courage to stand” – for example, telling seniors in Florida that he’d raise the retirement age – is often simply more semantics. Telling that to seniors doesn’t take all that much courage – they are already retired.

Perhaps there is no room left in the world for Republicans who are not willing to “get their mind around the language.” Judging from the ridiculousness of the climate science deniers and creationists in Congress that might very well be the case. To me, the story is a tragedy of Shakespearean proportions.

The Minnesota press loved Pawlenty and cut him a lot of slack. The less friendly national press is calling him boring and saying he doesn’t stand for anything.

They’re wrong. He does. It’s just that he doesn’t know what it is.

Shawn Lawrence Otto is a Hollywood screenwriter and a national science advocate, and the author of the upcoming book “Fool Me Twice: Fighting the Assault on Science in America.” He blogs at neorenaissance. He is married to state auditor Rebecca Otto.