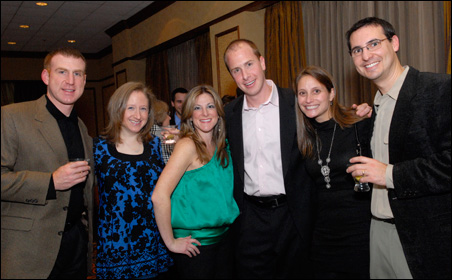 Courtesy of Leora Maccabee Itman
The Tempo lesson: The under-40 crowd at Jewish Family and Children’s Service of Minneapolis’ 22nd Annual Benefit mingled, drank and ate before the benefit.

“They’re not joiners.” “They just don’t care.” “We don’t have the budget for it.” “We don’t know how to reach them.” These and many other reasons are why many Jewish organizations don’t take the time to engage, inspire, and connect with Jews in their 20s-40s. As editor-in-chief of TCJewfolk.com, a multi-author daily online magazine and virtual communal space primarily aimed at young Twin Cities Jewish adults, I’ve heard those excuses and many more.

But our Jewish community ignores this generation at its peril; fail to “hook” us now and we’ll be gone forever. As the Jewish High Holidays of Rosh Hashanah and Yom Kippur approach, and synagogues look into their pews to see aging crowds filling the seats, this Jewish community must examine this issue.

Luckily, or not, the problems our community faces engaging a younger generation are not unique. It behooves us to examine success stories within our Jewish community, and those of other local organizations. For example, from Tempo, the Minnesota Opera’s young adults group, which had its smash-hit Opera Tasting event for over 100 young opera lovers this weekend.

Tempo has been around for about eight years, and started very informally. Tempo board member Joshua Dorothy explains the humble beginnings as a conversation at the gym by two opera marketing staffers about trends within performing-arts audiences. The duo realized that by building off of young people’s own networks, doing happy hours and informal, fun events, the opera company could engage novice and seasoned operagoers in a way they had never done before. And so Tempo was born.

They go where the young people are
The Tempo organizers decided that in order to engage young people in opera, they would have to do more than just ask people to come to the opera at the Ordway’s stunning facility. They would have to go where young people hang out, and do what young people do — socialize, eat, drink and talk — some about opera, and some, well, about other stuff. Tempo currently organizes six to seven events a year outside of the Ordway, in bars, restaurants and other venues.

Tempo also encourages its members to come to performances at the Ordway. The $50 Tempo membership gets its members access to significantly reduced ticket prices to opening-night performances and post-show cast parties. During intermission, Tempo ropes off a section for its young members to eat, drink and mingle.

So what lessons can the Twin Cities Jewish community learn from Tempo?

First, go where young people are already, and engage them in their communities, their spaces, and their styles. 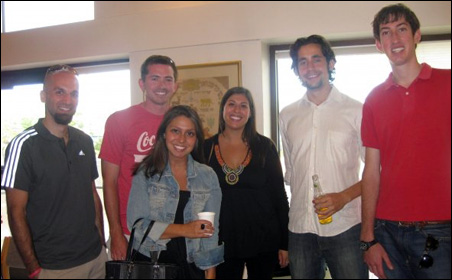 Second, incentivize young people to engage with each Jewish institution within the four walls of its structure, if it has one.

Third, work with young people to develop a community with its own identity to ensure continuity and strength over time.

Mind warp required – but some are already changing
For many Jewish institutions, these suggestions require a mind warp — a need to dramatically change how things have been done (or not been done) with respect to Jews in their 20s-40s. The good news is that several of our local Jewish institutions have started learning these lessons, and implementing unique programming for young Twin Cities Jews as a result.

The first Tempo lesson, going where the young people are already, sounds a lot like Beth El Rabbi Avi Olitzky’s preferred model of keruv. Keruv is Hebrew for “draw in.”  Olitzky explains, “There are two models of keruv. In one model, I plant my feet and try to bring you close to me. In the other model, you plant your feet, and I go where you are. Most institutions do the former. But we need to find the people, and go where they are.”

Olitzky started a Beth El young-adults group that includes Jewish happy hours and young-adult-only Sabbath dinners. The new programming was necessary, Olitzky says, because “this generation doesn’t connect with edifices in the same way, and doesn’t affiliate in the same way, as their parents did. People are going out anyway for drinks — why not get them to go out with us?”

Similarly, although Jewish Family and Children’s Service (JFCS) of Minneapolis is a 100+-year-old agency, it’s recently gotten hip to the needs of a younger generation. On Oct. 27, JFCS is organizing a pub trivia night at The Local. Attendees will drink, eat, answer trivia, and have a chance to win tickets to this year’s JFCS Annual Benefit on Saturday, Dec. 3, featuring comedian Tom Papa, host of NBC’s “The Marriage Ref.”

“The party at the Local will be fun,” says Sarah Malakoff, JFCS’ communications specialist. “We’re trying to make it as accessible as possible for young people to be involved at JFCS.”

Happy hours draw them in
Happy hours seem to be one thing that local Jewish organizations have figured out brings in the 20s-40s crowd. The Jewish Federations on both sides of the river do monthly happy hours to build community around their philanthropic goals. As Temple Israel Rabbi Jennifer Gertman, notes, “Young Jews want real Judaism on their own time and on their own terms, and why not? Isn’t that what every generation has demanded?”

Beth El, JFCS and Temple Israel are among those that have learned the second Tempo lesson, incentivizing young people to engage with the Jewish institution. Before each of Beth El’s young adult Shabbat dinners, the 20s-30-somethings join the synagogue’s older members for prayer services. JFCS has also gone to new heights to engage young Jews with the existing organization by hosting special events for those under 40 at its annual benefit. Last year’s Under 40 Pre-Party was a huge success with 150 attendees mingling and enjoying cocktails before the evening’s comedy show. “Why a party?” Said Malakoff, “To convey that young people can have fun at these events. That they’re not just something for their parents’ age group.”

Temple Israel also thrives with this second Tempo lesson. The synagogue engages this generation in a way no other synagogue locally really has, by organizing events at the synagogue for Jews in their 20s, 30s and 40s around the holidays, including a party for the Jewish holiday of Purim that — when I went last year — included vodka tasting, rabbis in drag, jell-o shots, and karaoke.

The third and final lesson, working with young people to develop a sustainable community and identity, may be the hardest. This generation is busy. Finding volunteers is not easy, but it is possible. Beth El’s young adults group is run by two volunteer chairs and is being shaped by a steering committee of young adults.

Young, charismatic staff is essential
A passionate, engaged and charismatic staff person (or two) to develop the programming and coordinate volunteers is another essential. Beth El has the young and hip Rabbi Olitzky. Young and charismatic Rabbi David Locketz runs Bet Shalom‘s “Simply Social” group for the 25-to-45-year-old crowd. Beth Jacob is even hiring a director of community engagement to spend half of his/her time coordinating focus groups and programming for synagogue members in their 20s-40s and for unaffiliated young Jews on the St. Paul side of the river.

However, as Temple Israel Rabbi Marcia Zimmerman explains, learning the Tempo lessons shouldn’t be an exercise in catering to an isolated segment of the population. “We’re not creating a separate but equal young Jewish community; our ultimate goal is to learn from the young Jews in our midst what Judaism will look like in the 21st century.”

And where does TCJewfolk.com fall in all of this?  The site offers local Jewish community organizations a “lifeline,” says Malakoff, by providing them a venue to communicate about events, volunteer opportunities, and generally, who they are, to the site’s primary readers — young Twin Cities Jews in their 20s, 30s and 40s. So whether you’re young, old, or in-between, log on to TCJewfolk.com and lend your voice on this issue to the comments. I’ll see you there.

Leora Maccabee Itman is editor-in-chief of TCJewfolk.com and an attorney at Maslon Edelman Borman & Brand, LLP.