The recordings some have called the “nasty Jackie” tapes that made their public debut on Tuesday have shocked a good many people. Despite all that has been written, rumored and dramatized about Jacqueline Bouvier Kennedy Onassis during the past 50 years, lots of us still think of her as an always impeccably mannered saint in sunglasses. 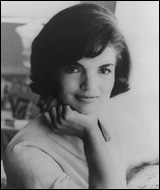 All of that aside, the not-so-kind things Jackie said about then-President Lyndon Johnson, The Rev. Martin Luther King, Jr., and others in the recordings made for the John F. Kennedy Presidential Library in early1964 (less than four months after President Kennedy’s Nov. 22, 1963, assassination) should not really shock anyone.

There are many things to consider when listening to the tapes. Most obviously, this was a 34-year-old woman with a captivating, almost sexy voice who had been the nation’s third youngest first lady and who also had just lost her husband to a gunshot assassination. Now 34 is a lot younger today than it was in 1964, but even then it was considered a tender age to not only serve as first lady, but then suffer such a horrific, ever-present loss (and, in the years to come, ever-broadcast loss). How many of us would have been able to hew to a totally politically correct line during such interviews, especially if we also had been instructed to be open and painfully honest?  Especially if we thought, as Jackie did, that the tapes would not be made public until 50 years after her last child’s death. (It was her daughter Caroline Kennedy Schlossberg’s decision to release the tapes at this time, along with a book she edited, “Jacqueline Kennedy: Historic Conversations on Life With John F. Kennedy,” which comes out today.)

An interviewer she trusted
It’s also important to keep in mind that the conductor of the interviews, historian Arthur Schlesinger, Jr., was not only a personal friend of Jackie’s but was considered by many to be the Kennedy “house” historian. Most of us feel safe talking to someone we trust, especially when we are extraordinarily vulnerable.

As well, it’s crucial to remember that Jackie was extremely close to her brother-in-law, Robert F. Kennedy, whose disgust and lack of respect for President Johnson and his own presidential ambitions were widely known. Robert Kennedy never wanted Johnson to be his brother’s 1960 running mate and he absolutely could not abide the idea of Johnson, thought by many to be folksy and many more to be completely uncouth, sitting in his brother’s Oval Office.

So imagine that you are Jackie and you know your adored brother-in-law cannot stand the man he sees as a pretender who also is writing quite near mash notes to you and your children.  Six months after your husband’s brains were splattered onto your pink suit, you remain in an almost immeasurably intense state of grief. You really don’t want to do the interviews but you appreciate history (Jackie knew it was important that she appear in the photograph with Johnson as he took the presidential oath after the assassination). Some say you are drinking too much vodka and decades later it’s said that you talked to a priest about wanting to join your dead husband in the other world. And you don’t want to anger your brother-in-law, the new and powerful head of the family that also controls your much of your money. Do you say uncharitable things about Lyndon Johnson when asked what you think of him?  Yes, I think you just might.

Later found Johnson rather charming and amusing
But as the years went by, Jackie moved beyond the emotionally shattered woman she was in early 1964. Her daughter, Caroline, has said that her mother found President Johnson to be rather charming and amusing much of the time. She nurtured a great and lifelong friendship with Lady Bird Johnson. She insisted on attending King’s funeral in 1968 despite the fact that it involved a public march through the streets of Atlanta. She even got a job.

I think some are dismayed to hear Jackie talking the way she did on the tapes because although we say we want presidents and first ladies to be human, the reality is many of us want them to be figures of perfection on pedestals. But such was not the case in 1964, and it is certainly not true in 2011, where we absolutely delight in the human faults of our presidents and first ladies.

Still, although I am a Jackie admirer, I am one who thinks of her as a real person, one capable of saying (as she did on the tapes about King) that she thinks someone is “terrible.”  And when I think of her as a real person, I also remember something she said some decades after the assassination: “I think my biggest achievement is, after going through a rather difficult time, I consider myself comparatively sane.”

Jackie was going through a difficult time when she made those recordings. And sometimes difficult, even nasty, things are said during difficult times.