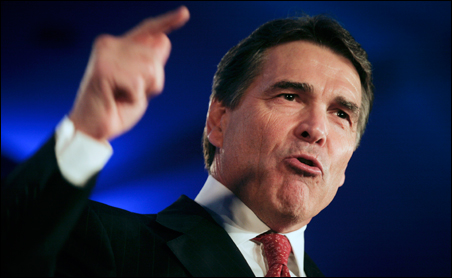 REUTERS/Lee Celano
I caution Democrats to not underestimate his ability to win elections — nor should they overestimate the electorate’s ability to make rational decisions when it comes to voting.

Most of my progressive friends, and many liberal pundits, chortle and debase the thought of Texas Gov. Rick Perry becoming the Republican nominee for president in 2012 — and a potential winner. True, Perry carries lots of negative baggage into such a race. But I caution Democrats to not underestimate his ability to win elections — nor should they overestimate the electorate’s ability to make rational decisions when it comes to voting.

Perry’s “baggage” comes in many forms, but in summary, the best description comes from Texas author Jim Hightower, who has followed Perry’s career closely and for a long period. His opinion:

“Republicans get a two-fer with him. One, they get one of the furthest-out of the far-out tea party right-wingers, sort of a Michele Bachmann with better hair. And also, though, they get … the real Perry, which is the exuberant, corporate Republican who never met a corporate lobbyist he wouldn’t hug as long as that lobbyist had a campaign check and a wish list.”

Hightower added: “He really is kind of a George Bush plutocrat without the intelligence or the ethics… the real Perry, is really going to be [the] corporate Perry. That’s the kind of governorship he has run.” And, indeed, he has been continually cozy with the notable Koch brothers, and others of the same ilk.

Then there is his zealous religious activity, which could be a turnoff for many Americans. This includes strong and explicit views on gay and abortion rights, and his failed “pray for rain” gambit.

Proposes an end to Social Security
Other potential problems: Perry said in August that if Federal Reserve Chairman Ben Bernanke prints more money before the election it will be “almost treasonous.” In his book he proposes an end to Social Security (a position clearly an anathema to elderly Americans). His record as governor is filled with pitfalls. The state has a massive budget deficit and he had extreme difficulty getting a budget passed, even with control of both the state House and Senate. In areas of education, health care, percent of citizens in poverty, and a higher than average unemployment rate, Texas is lagging.

All of which should be fatal for a Perry run at the presidency. But it is not.

Yes, that is what Perry will be peddling, based on his claim that in his 10 years as governor, Texas has created 1 million new jobs or about 40 percent of all jobs created in the United States, according to the Bureau of Labor Statistics. Never mind that his state leads the country in low-wage jobs (about 10 percent are bottom minimum wage), that it has the highest percentage of workers without health insurance, and that Texas is among the 10 poorest states in the nation, according to the 2010 Census. Then there is the outrageous hypocrisy that many of these “new jobs” were actually Texas government employees, which outpaced private-sector growth by a huge margin (Washington Post, Aug 20).

Something to grasp onto
So given all that, why could Perry win? For several reasons. First, the 2012 election will be about jobs, and Perry has a story to tell in a simplistic way that lends itself to powerful sound bites. Second, he will have funding to promote his message. With the Supreme Court’s Citizens United decision and Perry’s relationship with wealthy donors, he can dominate the media with his jobs promise. Third, he is a proven campaigner — incisive, audience-savvy, and an attractive package. Finally, the country is (and likely still will be) in an economic storm. Perry’s message will be a lifeboat for many, and something to grasp onto when sinking seems inevitable.

However, the added issue with Perry’s “lifeboat” is that his promise of jobs comes with a litany of right-wing extreme programs and dangerous policies that in reality, most Americans dislike and oppose.

We have seen such dynamics before in history. I am reluctant to mention them because the comparisons are onerous, and will be taken out of context. You can recall many of your own when citizens make desperate choices in turbulent times. The landscape of history is littered with promises of economic redemption, the turning out of a demonized government, railing against taxation, and simple solutions to complex problems. And the worst parts (and added reasons he can win) is that too often the public buys into this kind of promise.

Those who fear this will have to be vigilant, active and engaged if they are determined to prevent it from happening.

Myles Spicer of Minnetonka has spent his business career as a professional writer and owned several successful ad agencies over the past 45 years.

Why Rick Perry could be our next president