The Minnesota Republican Party has been in the news: It is $533,000 in debt, and continues to spend faster than money is coming in. Party Chair Tony Sutton attributed the debt to “a calculated gamble to spend heavily on the 2010 elections.”

The real problem goes far beyond the state party’s $638,530 for 2010 independent spending on candidates. By the way, that’s 38 percent of the comparable 2006 amount.

The graph below shows the big picture for Republican state party contributions during the Pawlenty/Sutton era. As you can see, there is a dramatic downward trend. 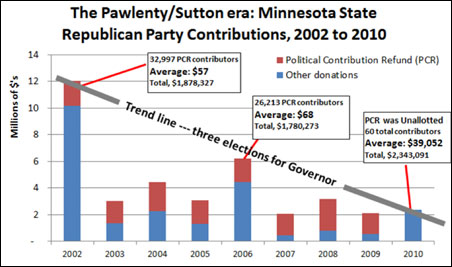 Gov. Tim Pawlenty’s decision to unallot the Political Contribution Refund program (PCR) in 2009 is at the root of the party’s current  financial problem.

Here’s how Minnesota’s campaign finance system works — when the PCR is funded:

PCR contributions have been a crucial grass-roots revenue source for the Minnesota Republican party. In both 2002 and 2006 over twenty six thousand Minnesotans contributed, averaging $57 in 2002 and $68 in 2006. In 2002 — before the bitterness of the Pawlenty era — the State Republican party raised an additional $10 million in larger contributions. The party had broad support, and many moderates were among its large House majority from the 2002 election.

By the way, some claim this is “public” or “government” money. I disagree — it’s citizens’ money. No one can live in Minnesota for a year without paying at least $50 in taxes one way or another. That money collected in taxes only ceases to be our money when the Legislature spends it — but not before! The Legislature provided that We the People (not the Legislature) can decide (with limits) how to spend $50 collected in taxes. It’s our money we’re spending.  This same principle applies to tax form check-off systems.

Contributors have become leery of a Minnesota Republican Party with serious accounting problems, and a $170,000 fine for reporting violations. Business owners won’t support a party that actively opposes needed infrastructure. We can’t tolerate today’s situation, where one of our major parties is now controlled by only 60 big-money donors, contributing an average of about $40,000.

Minnesota has an opportunity to restore the Political Contribution Refund program. If we do this, Minnesota’s campaign finance system can function again, and grass roots links to candidates and parties can be restored.

Bob Carney Jr. is currently seeking the Republican endorsement and nomination for the U.S. Senate seat held by Amy Klobuchar.

The real problem behind the Minnesota Republican Party’s deficit