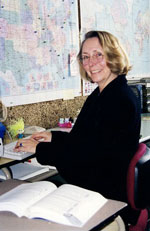 BEMIDJI, Minn. — I recently spent a day in Boston. I am especially fond of the Boston Commons, an enchanting respite area in the midst of a bustling modern city. I watched delighted (and mostly inept) ice skaters on a frozen public pond, old and young sitting on benches or hurriedly cutting across the park to the state Capitol or Starbucks and a group of school-age tourists being given an early-American history lesson by their teacher.

Across the street from the Commons, I could see the Granary Burying Ground, the final resting spot of thousands of early American patriots, including Paul Revere, three signers of the Declaration of Independence and five victims of the Boston Massacre. The site is supported with public money and visited daily by locals, tourists and historians. It’s like a window to the past in a most unexpected place.

There is an even larger historical burial site right here in the heart of downtown Bemidji and adjacent to our beautiful lake. However, it’s not listed on any of the abundant promotional materials distributed by our Chamber of Commerce or government entities. It’s not only unmarked, it’s covered by a just-closed Pamida store, a recently constructed Subway sandwich shop, an abandoned Burger King and a blacktopped parking lot for the convenience of 21st-century shoppers.

This is not a secret, nor is it surprising. Ancient indigenous settlements are common on Minnesota lakes. This particular site fronts not only Lake Bemidji, but the Mississippi River as it flows into the lake. Back in 1988, when Pamida had a foundation excavated to build an addition, more than 12,000 artifacts were unearthed, along with human remains. It’s been said that the area also includes the graves of early white settlers.

Some of the artifacts that were recovered in 1988 appear to be more than 10,000 years old, an astonishing fact in itself. This land could become a memorial site and learning laboratory that could provide a deep experience to a broad spectrum of visitors – more so than a discount store and fast-food restaurants and the run-down carny rides across the road on prime lakeshore. The heart of Bemidji was mistakenly sold off too cheaply for unworthy purposes by previous generations. This might be the only opportunity for many more generations to rectify the situation.

The Pamida store closed this week. Public records show several interesting details about the Pamida property of almost 94,000 sq. ft. It’s assessed at $577,100, and the taxes are $19,750 per year. It’s owned by one David Bolger, who happens to be a wealthy philanthropist who is now the head of a foundation in New Jersey. He’s given away almost $100 million to cultural, educational and health organizations in the past 13 years. A $600,000 gift for such a worthy project is not unreasonable.

Honor the past, give to the future

The civic leaders of this town and surrounding reservations should show the same kind of enthusiasm and leadership for this challenge as they did in making the Sanford Center become a reality. Bolger should be approached with a request, accompanied by a vision for a community project that would honor the past and be a gift to future generations in a way that an outlet mall, a ferris wheel or even an events center could never do. The same could be done with the Subway property, which is owned by a property company in Connecticut, and the Burger King property, which is owned by Kraus Anderson.

But time is of the essence. Joe Day, the now retired cultural affairs director of the Minnesota Indian Affairs Resource Council, recommends that Bemidji and Beltrami County first look to the city of Bloomington for a model cultural-resource plan. That plan should guide the process for the use of the Pamida site. Day would like to see the Pamida building torn down, the parking lot torn up and the entire area be a memorial site. Some people have mentioned moving the Bemidji Science Center, which does the best job it can in a converted hardware store downtown, to a remodeled Pamida building.

These are valuable and value-based discussions that should happen. But first a decision must be made: Does Bemidji want to take charge of its future or let it be decided by second-rate national chain stores or fast-food franchises? Boston thrives because it respects its history. We could do the same.

Louise Mengelkoch is a professor emeritus of journalism at Bemidji State University.