Editor’s note: The landmark Title IX legislation was signed into law 40 years ago tomorrow by President Richard M. Nixon. The following Q&A with Mary Jo Kane, director of the University of Minnesota’s Tucker Center for Research on Girls & Women in Sport, originally appeared in the Minnesota Women’s Press, which devoted much of its June issue to the subject. 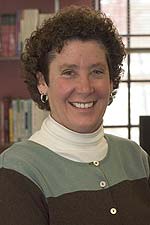 When Mary Jo Kane came to the University of Minnesota in 1989 she was one of a handful of people nationally conducting research on the social science of female athletes and the impact of Title IX. A few years later, when a donation of $1 million was given to the University by Dorothy McNeill Tucker for developing a research center, Kane jumped at the opportunity.

“What we needed was something inside of higher education that took seriously the study of how sports and physical activity impacted girls and women,” Kane said. She proposed developing a center to deepen this research.

The Tucker Center for Research on Girls & Women in Sport was launched at the University in 1993. Its founder and director, Kane, is outspoken about the impact of Title IX-the 1972 landmark legislation giving equal opportunities in education to girls and women. She spoke recently with the Minnesota Women’s Press about some of the myths, stereotypes and unintended consequences of Title IX.

Mary Jo Kane: Title IX is part of the Education Amendments Act, which is civil-rights legislation. Education is the broader issue of Title IX, but I think people don’t understand this. Today, women are the primary percentage of students on campuses. Women are the predominant percentage of people getting all degrees, whether undergrad, master’s or advanced degrees. This was not the case pre-Title IX.

But, it’s fair to say that Title IX has had its greatest impact — certainly it’s most visible impact — in athletics. When you start with zero … sports have exploded in respect to [girls’ and women’s] participation.

MWP: What are some of the myths or stereotypes surrounding Title IX?

MJK: Title IX is blamed for hurting men’s sports. But with respect to occupational employment, it’s been a boon to men. Because of Title IX, men now have two career tracks: They can go into men’s athletics or women’s athletics. Prior to Title IX, 90+ percent of all head coaches in women’s athletics were female. Today, nationwide, it’s only about 43 percent.

Women have not made similar inroads into men’s athletics. They represent only about 2 percent of all head coaching positions [of male sports’ teams], and rarely in a team sport like hockey, football or basketball.

Another myth is that college football makes so much money it not only pays for itself but for all other sports, including women’s sports. People ask, “Why should we give money and attention to women’s sports since they don’t pay for themselves?”

The majority of men’s sports don’t make money or pay for themselves [either]. Football generates enormous sums of money, but it is an extremely expensive sport.

So, the question becomes not whether or not football is revenue generating but it is whether or not it is profit making. It may be true that the football team generated $2 million last year, but if it cost $3 million, it does not pay for itself-let alone everybody else.

[Another stereotype we’re told is] whether we like it or not, college sports have become a big time economic engine, so get used to this new corporate model where profit rules the day.

This is an [economic] pressure that was put on women’s sports that was never put on men’s sports or any other extracurricular activity, prior to the passage of Title IX.

MWP: Are there other stereotypes?

MJK: The biggest and the most harmful stereotype is that Title IX is a flawed piece of legislation that forces schools to drop men’s sports.

The Office of Civil Rights oversees whether a school is in compliance and uses a three-pronged test to do so. One of three criteria has to be met: Is the school meeting the interests and abilities of the underserved population? Is there a history of continuing expansion in meeting its obligation to female athletes? And then the most controversial, the issue of proportionality, which critics of Title IX claim is based on an affirmative action quota system.

Of the three compliance options, proportionality is the easiest to measure. How do you measure a history of continuing expansion? Three sports in five years? Four sports in seven years? Similarly, how do you measure meeting the interests and needs of student athletes? But with proportionality, the key question to ask is what’s the gender ratio (or proportion) of a school’s undergraduate population? That’s easy to measure.

So courts have relied on proportionality, versus the other two prongs, to determine if a school is in compliance. If 53 percent of the school’s undergraduate population is female, are female student athletes at that same school receiving 53 percent (within 5 percent) of the school’s athletics

MWP: How does that play out?

MJK: When you have a situation where an athletic director is told [the school is] not in compliance, they typically have three options:

3. go to football and tell them they have to reduce the size of their roster or recruiting budget. I don’t know an athletic director (AD) who will choose that.

Often they go with door No. 2 [dropping a men’s sport] because it’s frankly the most expedient and cost-effective thing to do. An AD can say, “Don’t look at me. Title IX made me do it.”

I have great empathy for athletic directors. It is not easy to drop a sport. It is agonizing. The majority of athletic directors want to do the right thing. They are in a very difficult spot. That doesn’t mean, however, that Title IX forced them to drop a men’s sport in order to be in compliance.

There’s nothing in the law, either in terms of the technical aspects or in the spirit or letter of the law, that says in order to comply you must drop men’s sports, but in terms of the reality, that is what happens. Far too often, Title IX becomes a convenient scapegoat.

Kathy Magnuson is co-publisher of the Minnesota Women’s Press.