When Minnesotans hear that the temperature is about to drop to 30 degrees below zero they’re more likely to say “Bring it on” rather then “Oh, no.”

We would like to ride our bikes, walk our dogs or go for a run, but we heed the warnings that the heat is a killer. So we stay inside something, anything that is a cool 75 degrees.  Wimps.

I grew up in St. Louis, Mo., where the temperature and the humidity both hit the 90s in May and stayed that way until late September. Life did not stop. And because I am quite old, there was not much that was air conditioned when I was a kid.

Most people turned on fans at night

Air conditioning was limited to the downtown movie theaters, a few department stores and some fancy restaurants. Nobody I knew had an air-conditioned house, and air-conditioned cars had not been invented.

To stay cool, most people opened up their houses at night and turned on fans to bring the night air inside. We did that.

In the morning some people would close up their houses and draw the drapes to keep the sunshine out and the temperature down. We did not do that. With three kids in the family, closing up the house was impossible. So we learned to live with the heat.

No pool, but we had a hose

Our town did not have a swimming pool. There were no lakes. But just about every house had a garden hose. What more do you need? Somebody’s mother would stick her head outside and say the magic words:  “Go home and put on your swim suits.” We didn’t need a pool.

We were wet, and the grass got watered.

We rode our bikes. We played softball in the street. We spread old blankets on the grass and played board games in the shade. And when we decided it was too hot we moved into the basements.

My friend Eddie had a play area in his basement back behind the furnace. There was a table, some chairs and a pile of board games. We spent hours there. I cannot look at a Monopoly game without remembering Eddie and his basement.

Next door to Eddie my friend Janet had a basement with old clothes stored in bin along one wall. We played dress up and fought over the choice outfits.

In my basement I had a clubroom. It was a set off from the rest of the basement by old sheets hanging from rope and it was called the GMS Club. I could explain what GMS means, but then I would have to kill you.

It was hot, but even we kids knew that it was cooler in the basement.

Dressing up for the Cardinals

Adults also went on with their lives even when they were dripping with sweat. The St. Louis Cardinals played outside, and people dressed up to go to games. If Stan Musial could play ball in a wool uniform, then the spectators shouldn’t complain about showing up in business attire. 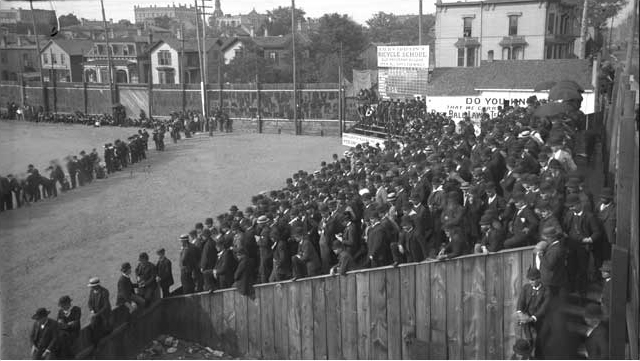 Courtesy of the Minnesota Historical SocietySpectators at a baseball game behind the West Hotel in Minneapolis, ca. 1890.

My mother was not a morning person. She did her ironing at night after the window fan was pulling cool air into the house. If you don’t understand about ironing I will leave it at this: It was hot work that was never finished.

Sometimes we gave up. Sometimes we couldn’t take it anymore. For those times we had Guy Miller’s Cafeteria. Mr. Miller had air-conditioning. He also had good food, low prices and all the iced tea you could drink. A family of five could eat their dinner there without breaking the bank and go home to a clean kitchen.

When the temperature hit 100 Mr. Miller played to a packed house.

It was hot outside. At home it was hot inside. And life went on. We grew accustomed to the heat of summer the way Minnesotans grow accustomed to 30 degrees below zero in the winter.

We need to learn how to do the same thing for hot weather. We waited all winter for summer to arrive and now that it is here, now that it is hot, we should get outside and get on with life.

We all know survival skills. We just haven’t discovered that they are required for temperature extremes at both ends of the thermometer.