Last week a report [PDF] was issued by the national State Budget Crisis Task Force indicating that six populous American states have “long-term budget burdens that are limiting their ability to pay for basic services.” While not included in the study, Minnesota faces many of the same problems. 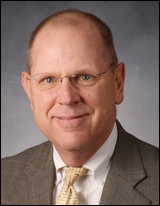 The State Budget Crisis Task Force recommended that state government finances become “transparent and accountable.” How should Minnesota do that?

First, Minnesota has to recognize that it has a structural budget deficit (i.e. in a normal year Minnesota revenues are less than expenditures). Second, Minnesota must avoid using accounting gimmicks. The way to ensure that they are not used is to balance not only the current budget but also make sure that a projection of the following biennial budget is balanced as well. Finally, we need bipartisanship to develop solutions for all Minnesotans.

Many actions are going to be necessary to fix Minnesota’s budget imbalance. First, Minnesota needs to reform its revenue system. For too long, Minnesota has underutilized its sales tax. We need to expand the sales tax to include clothing, personal services and online purchases to offset the need for further property-tax increases.

Minnesota’s collected tax revenues as a percent of personal income has been below the national average for five of the last seven years. With the existing shortage of revenue compared to expenditures, Minnesota needs to raise revenue at least to the average of all the states.

Revenue cannot be the only budget response. Minnesota needs to reduce spending as well.

Many states have reduced expenditures on infrastructure like roads and transit and on higher education. But reducing investments in the future is not the right way to address expenditures.

Minnesota needs expenditure reform. How can we get the same amount of service with fewer dollars? How can we redesign our public services? Our state employees need to be brought into the discussion of reforming state spending. They are dedicated and have good insights about better ways of spending state dollars.

Minnesota, like many states, is under fiscal stress. While we are in better condition than many states, we are not fiscally healthy enough. We have work to do. When considering candidates for the Legislature this fall, look for those who go beyond the typical rhetoric to talk about what they are prepared to do put Minnesota back in good financial condition.

Jay Kiedrowski is a Senior Fellow at the Public and Nonprofit Leadership Center, Humphrey School of Public Affairs, University of Minnesota. He served Gov. Rudy Perpich as commissioner of finance.